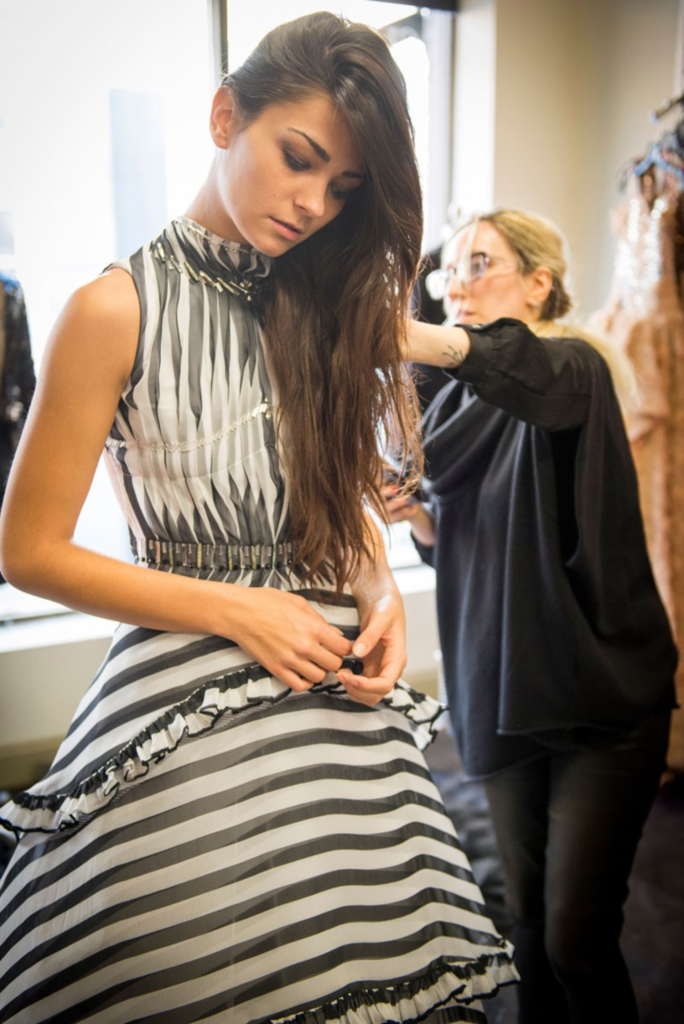 Whether your heart flutters for feathers or sings for sequins, Kansas City Fashion Week is ready to move you. This weekend, the region’s premier designers take over Union Station to show off their fall and winter collections. Now in its seventh year, the event looks right at home in one of the metro’s most iconic locations.

I talked with six of the 19 featured designers, whose singular creations rock the catwalk Thursday through Saturday, to find out what inspires them, how their designs are unique, and why they love Kansas City.

“I’m walking my finale look down the runway with a friend of mine who’s not necessarily a traditional runway model,” Shuster says. “He has a prosthetic lower right leg.”

So, yeah, the Kansas City native loves surprising people. And he says he’s looking forward to showing designers from the coasts what his hometown is all about.

He laughs and adds: “I’m a Kansas City man, and I don’t plan on leaving. I love where I live.”

JANE OF ALL
When Chelsea Riane talks about her methods for dyeing fabrics, you almost get hungry.

For instance, she uses her favorite spice, turmeric, to produce a beautiful, vibrant yellow. The pretty shade of rose in some of her line: avocado pits and stems. And she has found that boiled-down red-onion peels generate a sumptuous shade of gold or amber.

“I go on hikes and find berries, and I boil them down and turn them into a dye,” Riane says. “I have a pomegranate tree in my backyard, and those produce a really beautiful pink dye.”

Those natural dyes are central to Jane of All, Riane’s new line of lingerie and ready-to-wear clothing, which launches Friday night. KC Fashion Week’s runway is also a good excuse for the KC native to come north again, after a recent move to Austin, Texas. There, she has helped spearhead Design Lab, a design boutique.

Jane of All is a twist on the old phrase “jack of all trades,” and its clothing line rather appropriately encapsulates a variety of influences.

“This collection is basically inspired by ’90s grunge streetwear,” Riane says. “It’s going to be looks you can wear every day that take influences from hip-hop, grunge and everyday wear like flannels, dresses and skirts. It’s something that you would see anyone wearing on a day-to-day basis.”

JESSICA LYNN
Jessica Lynn Collins is still unsure of how she ended up with a sewing machine.

The children’s fashion designer and mother of six from Columbus, Nebraska, started making hair accessories after giving birth to a daughter eight years ago. Somehow, amid the chaos of new motherhood, she began sewing clothes and posting photos online. Before she knew it, her creations were in demand.

“I spent a couple of years just making clothes casually for other moms,” Collins says. “I just started sewing one day, and it’s led to what I’m doing now. I never knew I would do this.”

Her label, Jessica Lynn, is all about dressing up and having fun. Her current collection, she says, is inspired by Native American designs, especially feathers and fringe. She’s excited to make clothes for older children, even if her own daughter no longer makes the best model.

“She literally tore her Fourth of July dress on a fence post,” Collins says. “I’m like, ‘You had it on for an hour!’ She’s just too rough.”

Collins has shown her clothing across the country, but her heart is still rooted in the small-town Great Plains.

“I love doing shows in the Midwest so much more than the coastal shows,” she says. “You have a little more say here in what’s going on, and you can stay on top of it a lot better.”

Women warriors influenced her first collection. The next year, she drew inspiration from turn-of-the-century ballerinas and Gypsies (known as Roma). When she saw a photo of an Ivy League campus from the 1940s, she immersed herself in the preppy world of plaid, tweed and houndstooth.

Now, she has learned to hand-paint silks, allowing her to fully realize this year’s theme, which she’s calling “sea folk.”

“The color palette is blue, green, turquoise and earthy yellows,” she says. “It’s very fresh, clean and modern, but I still use vintage silhouettes.”

In line with her vintage love, Long also enjoys giving forgotten fabrics and other items their moments again in the limelight.

“At least a third of my collections are usually repurposed,” Long says. “If it serves my purpose and needs a new life, I love to do that.”

Speaking of new life: The Kansas City native says she’s eager to see how much her hometown’s fashion scene has grown in such a short time.

“It’s all about sustainability,” she says. “People are very interested in figuring out how they can get something unique that supports an artist. They also help the economy and those that are creating awesome things.”

LUCIA’S SARTO
When it comes to bedazzling her clothing with sequins, Nataliya Meyer says the only hard part is self-restraint.

The Ukrainian designer, who calls herself an “easily distracted artist,” loves anything colorful and shiny and takes care to avoid going overboard. Her new collection, however, has just the right amount of bling.

When I stop by Meyer’s West Plaza clothing and tailoring shop, she shows off her newest runway pieces, talking excitedly about the fabric she purchased on a recent trip to Greece. Her new looks combine lush textures, fur accents and delightfully unexpected hints of sparkle including Swarovski crystals.

Some of her clothing would look equally at home on a runway or in line at a local café, but all of her pieces share a meticulous attention to detail. Meyer places an intricate, hand-beaded necklace on the table, then tells me that she can’t remember exactly how long it took her to finish it. She’s not one for tallying up the hours.

“Most normal people come home from work and watch television or spend time with their family,” Meyer says. She lives in Kansas City with her husband and their son. “I sit down and work on my beading.”

In addition to her own label, Oblivion Clothing, Meyer also makes custom pieces — commissions that have encompassed, she says, a Nightmare Before Christmas–themed wedding gown along with classic-yet-feminine suits for lawyers.

“They are all my babies, and I have to take care of them all,” Meyer says of her customers. “It’s my job to make them feel a little better than when they came in. Sometimes I almost get high on that feeling.”

ARCHITEXTURE
Working alongside family can be challenging, but husband-and-wife design team John and Christina Moncke complement each other’s strengths.

“Christina is like an architect,” John says. “She knows fashion, design and style, but she also knows how to build the garment. My point of view is more aesthetic and brand-focused.”

At their studio at the Bauer, in the Crossroads, John and Christina create Architexture: a women’s clothing line that they say is “modern, minimalist and elegant.” Some of their influences are unexpected; for example, how does their love of cars render itself into a wearable garment?

“For us, fashion is about design,” John says. “We might see a beautiful car and be inspired by the sculptural lines, material and color. When we see an architect’s use of frosted glass and steel, we translate this into clothing with translucent silk organza and metallic-silver materials.”

They both still work day jobs: Christina teaches college fashion courses, and John is a designer for Sporting KC, working on such things as player uniforms and retail scarves. Though not originally from Kansas City, they’ve found a happy home amid the city’s burgeoning culture of artists.

“We like the lifestyle and people here,” John says. “There is a vibrant creative community in KC.”