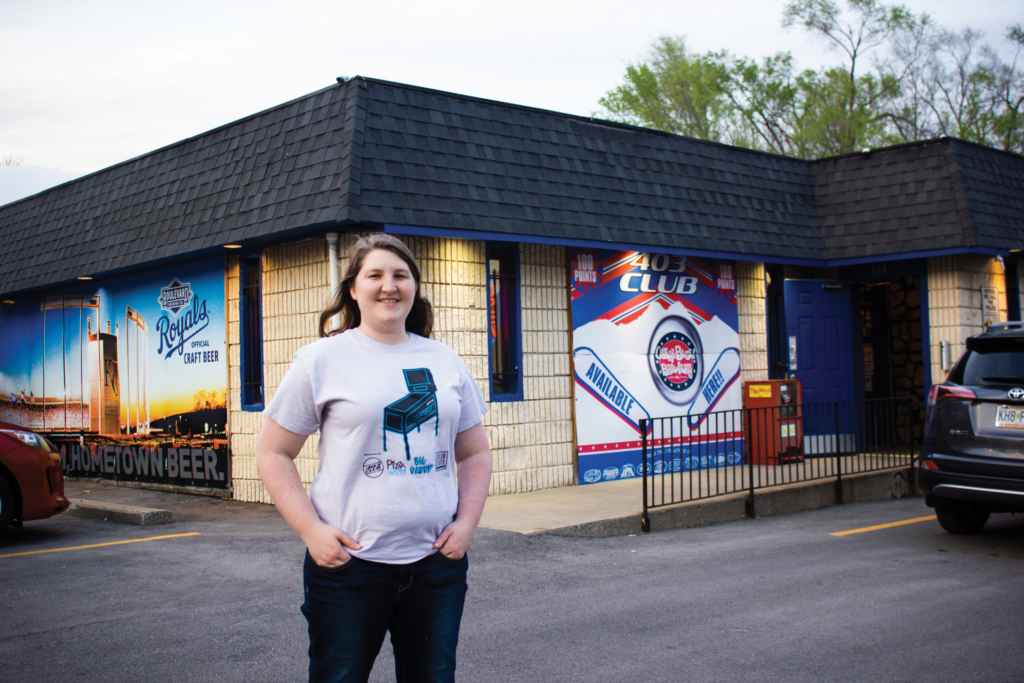 Almost every Wednesday night, you can find Keri Wing at Strawberry Hill’s 403 Club, where the flashing lights of nearly a dozen pinball machines light up the dimly lit interior and a neon sign that shouts “Play Pinball” shines on the wall above Deadpool and Metallica machines. Wednesday is tournament night at 403, and a couple dozen local pinball enthusiasts typically turn up for it. But tonight’s extra special — it’s the first league night since Wing won the Women’s World Pinball Championship on March 28. Wing stands back and watches her fellow pinballers and sips at a $3 draft beer.

Wing is poised and calm when she stands in front of a pinball machine. Between the dings, taps, and bright lights of the games around her, the only thing that moves are her eyes and her hands, which tap rhythmically at the flippers on each game. A saxophone player and teacher from Olathe, Wing came of age during the 1990s — a period considered by many to be a golden age of pinball. She credits her father, Kevin Wing, for instilling in her a passion for pinball machines. He taught her how to play and repair electromechanical games — machines made before the 70s. Together, they have nearly 30 pinball machines in their basement, and it was Wing’s dad who brought her to her first tournament.

“I got second place — almost got first,” Wing recalls. “And I was kind of like, Oh, I want to come back and try to win.” 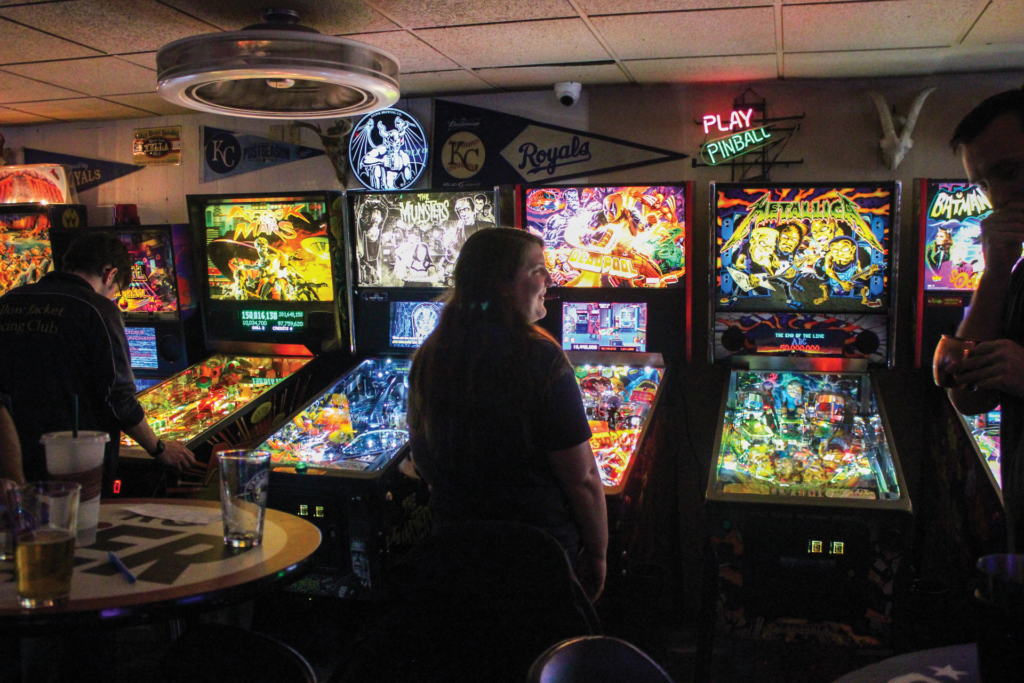 Gender dynamics have become a spicy topic in the pinball world in recent years. A stunning 92 percent of pinball players are male, and though Wing says she always feels welcome at Kansas City tournaments, there’s been multiple reports of hostility toward female players across the nation. (There’s also the fact that, historically, pinball artwork is often, well, sexist.) To combat some of these perceptions, the IFPA — pinball’s “governing body” — helped create a number of women’s leagues, such as Belles and Chimes, founded in 2013 in Oakland by Echa Schneider. In two short years, the percentage of female pinball players in California nearly doubled, to 24 percent.

“People ask, ‘What’s the point of having a women’s tournament? Women and men can both play pinball,’” Wing says. “Which is true. But I think it’s more of a matter of getting more women interested in pinball.”

The 403 Club’s tournaments — open to all and only $5 to participate — are inclusive by design; owner Artie Scholes opened the bar in 2011 because he felt there wasn’t really a dedicated pinball destination in Kansas City at the time. Early on, only five or six dedicated players came in regularly. Today, about 25 come in every Wednesday for the tournaments.

“I first met Keri at a pinball tournament in Shawnee in 2013,” Scholes says. “We were all very impressed by her skills. Little did we know at the time that she was raised in a home full of pinball machines in the basement. Of course, now she beats most of us on a regular basis.”

Pinball’s a niche sport that often requires specialized knowledge, but the players at 403 are largely welcoming — happy to share tips and guide newcomers through the rules of the league. Everyone has their own unique combinationation of skills: Steve Hill has a encyclopedia-like handle on rules and strategies; David Ziegler is a patient player adept at catching the ball before it “drains,” or leaves the playing field; and Jason Schefflemaer — currently the top-ranked Kansas pinball player, and 134th in the U.S. — has refined flipper skills that give him precise control over every shot. 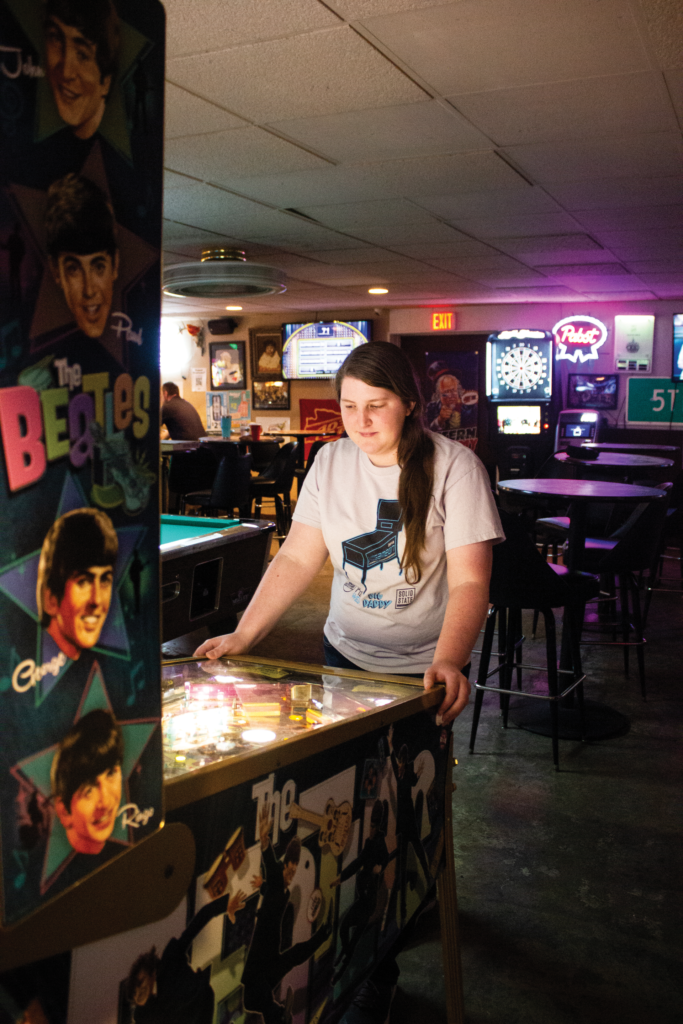 What sets Wing apart is not only her zen-like stance, but also her deep knowledge of a variety of games.

“She has the ability to play games from all eras,” Ziegler says. “In her basement, there are games from the 60s, but also new games. You have to attack them differently. And she can attack them all in a very efficient manner.”

Prior to her championship win, Wing spent hours watching videos, reading instruction cards, and taking notes on the pinball machines she would be playing. Every pinball machine has an entirely different set of rules, she explains. If you’re new to pinball, her best advice: “Shoot whatever is flashing.”

Last December, Wing helped run the first pinball tournament at KC Game Con, a local gaming convention. Collectors brought in machines, and 48 players signed up to compete. After the convention, the 403 Club started seeing new faces at Wednesday night league. Wing will be working on the same event at this year’s KC Game Con, set for November, which she hopes will help continue to grow the pinball community.

During the Women’s World Championships, Scholes and several other 403 regulars stayed up late to watch a live stream of Wing competing. In the morning, Wing woke up to messages of encouragement and celebration. Tonight, back at the 403 Club, Wing is met with the same enthusiasm: congrats, cheers, people excited to play next to the winner of 2019’s Women’s World Pinball Champion.

“When you play with these people every week,” Wing says, “they kind of become your best friends.”