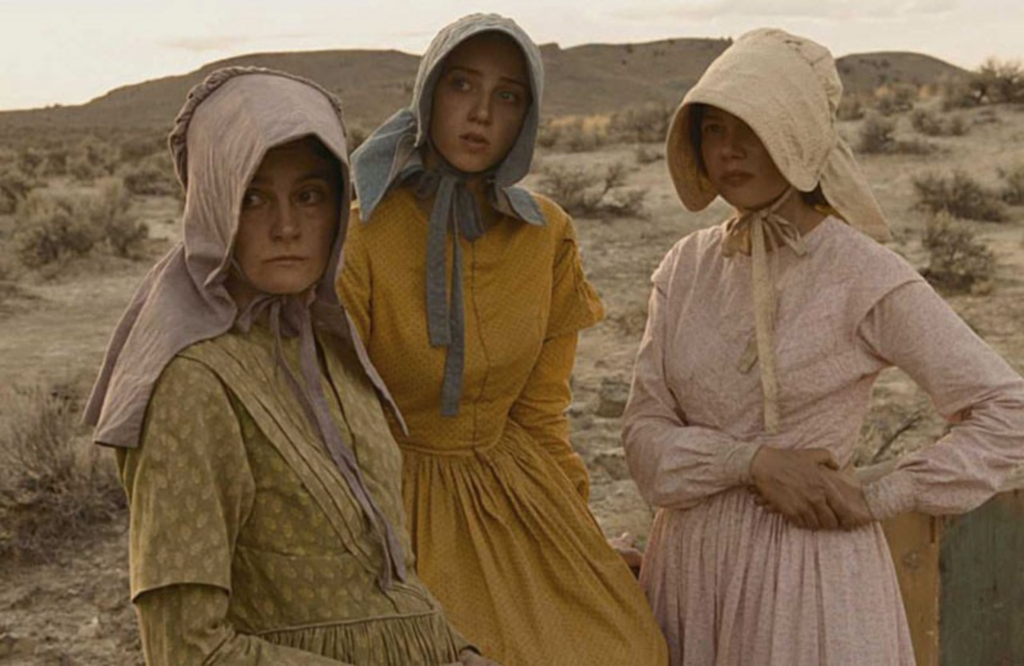 Even good Westerns these days tend to look like pageants — excuses for people to dress up and go through ritualized motions of gunfights, shootouts and hard rides. Sergio Leone’s operatic spaghetti Westerns of the 1960s, glorious as they are, share in the blame, having fetishized every sidelong glance, every reach for a pistol.

But Kelly Reichardt’s Meek’s Cutoff acts as a kind of anti-Leone Western, one that reasserts the virtues of economy, purpose and tight construction. The time and setting, established in the same breath as the title, is 1845 Oregon. A wagon fords a river, followed by several settlers. The crossing hews closely to real time, but not because a long take is the rage in art movies these days. For people headed west in 1845, nothing was hastened by modern convenience. Under Reichardt’s scrutiny, each action takes on weight because of the time and effort behind it. You want a drink of water? You have to hoist that big wooden bucket. To wash that dish, you haul it down to the creek.

Those duties take on a different aspect after the movie’s early scenes — which is about the time we realize that we’re watching a settler laboriously carve a message into a downed tree: “LOST.” (Even the speed of desperation has been slowed.) Three couples have hired a guide named Meek (an ideal Bruce Greenwood, less Rooster Cogburn than boastful capon), whose main qualification seems to be his resemblance to a Wild West Show ringmaster. His swaggering confidence passes for knowledge. As a skeptical settler (Michelle Williams) figures out what Meek is increasingly unable to hide — he doesn’t know where the hell he’s going — the trailblazer gets a break. He secures a convenient diversion: a lone American Indian captive (Rod Rondeaux), who provides a handy focus for the party’s fears.

If Leone brought enormity to the Western genre — a mythic scale that made every dusty street into Monument Valley — Reichardt brings gravity. The cinematographer, Christopher Blauvelt, uses the same roughly square aspect ratio in which Anthony Mann filmed his early 1950s Westerns, and Reichardt employs the boxy frame with similar skill. There’s space all around the characters, but having no clear-cut path or destination makes it eerily claustrophobic — an effect heightened by the lunar desolation of salt flats and empty plains.

Being lost in this landscape builds a steady, unrelieved tension, and the weight that Reichardt gives all those mundane chores in the early scenes pays off when the situation calls for something as grave as a standoff with guns. When you see how much trouble it takes to lock and load a rifle, you get a much stronger sense of the determination it takes to then point it at somebody.

Meek’s Cutoff, written by Jonathan Raymond with an admirable emphasis on action over language and exposition, has been read as a Bush II allegory of a corrupt leader guiding unquestioning followers into the abyss. The movie is much better than that. With Williams, an actress who projects a questing mind and hard head, as the movie’s acting intelligence, it’s more a story about misplaced faith and a populace starting to listen to its conscience.

The ruthless Manifest Destiny on display here may be exposed as a con, but in the boldly unresolved ending, there are no guarantees that these settlers have chosen anything but a different doom.