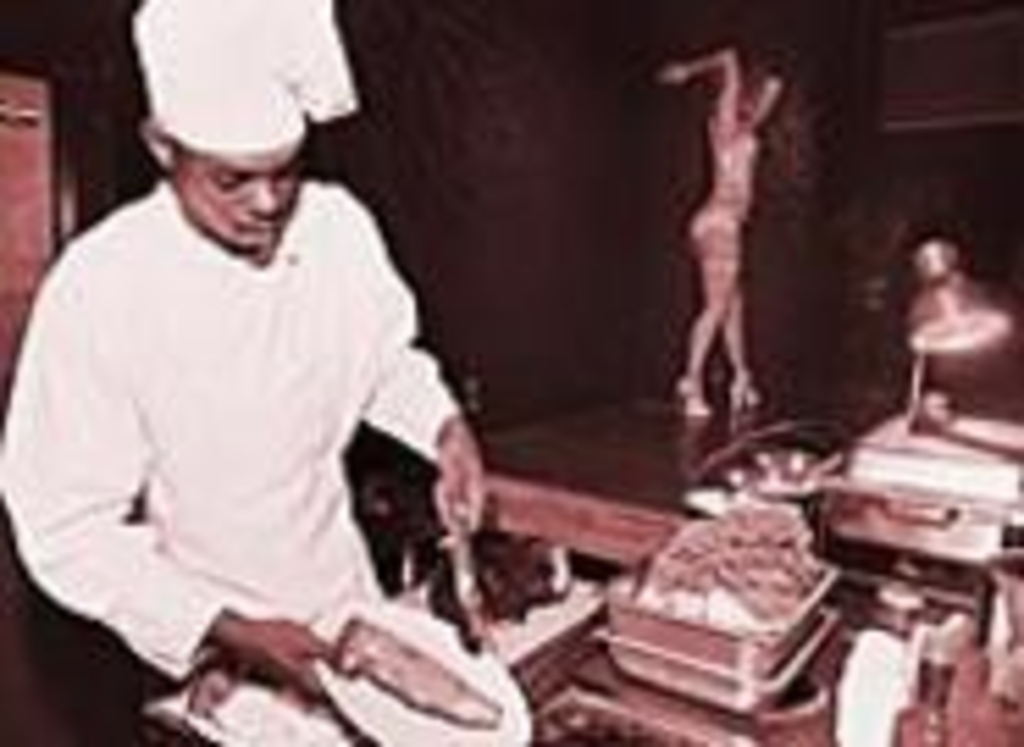 The dinner-theater concept is well-known in Kansas City. It’s where patrons eat a buffet dinner and then, after the plates have been cleared away, the curtain rises and the people watch a play.

At Gala, the six-month-old nightclub located just a hop, skip, and a jump off I-70 in Raytown, a different kind of theater goes with dinner. Or is it the other way around? Maybe young, nubile women stripping down to pasties and G-strings don’t necessarily exemplify theater. But think Cabaret without the orchestra, the songs, the dialogue, and the plot — and there you have it: Gala is a combination of 1950s Las Vegas, prewar Berlin, and the literature of Mike Hammer all rolled into one mammoth room with walls as twinkly and sparkly as a star-filled summer night.

The stage is little more than a floating platform of polished maple with two shiny brass poles extending from the footlights to the sky-high ceiling. A few inches from stage left is the rolling prime-rib station, where chef Anthony Montgomery can slice a slab of beef from a juicy roast at the same moment a stripper exposes her breasts, stage right.

This may not be everyone’s idea of a sophisticated supper club (it’s definitely not mine), but Gala does have the same kind of saucy and sexy — not sordid — joie de vivre associated with France’s Les Folies Bergère or the Playboy Clubs of a simpler, more natural time.

At dinner hour — 7:30 p.m. — on a recent weeknight, no one was eating dinner, but things were bouncing nonetheless. The handsome managers wore tuxedos, and the beautiful performers, who often mingled with the customers, dressed in outfits that were one part Bob Mackie, one part Frederick’s of Hollywood.

And that wasn’t the evening’s only Hollywood metaphor: The club’s boss, Jeff Stoller, looks amazingly like Harry Dean Stanton. If he sits down next to you for an amiable chat, it’s easy to imagine that this isn’t real life but a scene from a Martin Scorsese movie.

“This is like a Vegas supper club,” Stoller said, barely looking up at the stage, where the lithe Simone, a dead ringer for Julianna Margulies, had propelled herself up a brass pole. “An adult supper club.”

I had brought two adults along for the show: Tony, who practically salivated over the showgirls, and Bob, who was disappointed that the show wasn’t more of a … show.

“They should hire a choreographer,” he said as he dipped a fat, chilled appetizer prawn ($9.50) into a swirl of cocktail sauce. “Why can’t there be production numbers and costumes?”

I had to remind him that the days of burlesque stars — such as Gypsy Rose Lee, Ann Corio, and Kansas City’s own fan dancer Sally Rand, who all worked with props and costumes and witty patter — were long gone. Now all a showgirl has to do is look sexy and shake her groove thing. And choose the right music.

“What do you think I should play for my number?” asked Serenity, the blonde who plopped, uninvited, into an empty chair at our table. “I’ve got Depeche Mode, U2, anything but country music,” she said, smiling brightly as she held up her CDs.

I was nibbling on my house salad ($4.50), a pretty basic affair of iceberg lettuce, tomatoes, mushrooms, and hard-boiled egg doused in a piquant balsamic vinaigrette. You can order the same salad dolled up with strips of prime rib ($6.50) or chilled prawns ($12.50), but I prefer my greens undressed. It was then that I noticed our table was the only one with food on it.

Most of the cabaret tables around the stage were occupied by glum-looking single men, except for a trio of broad-shouldered athlete types, all sporting expensive watches and cell phones. Behind our table, lounging on one of the sofas in the VIP section (separated from the room by a brass railing), a lone, middle-age man enthusiastically rubbed his hands over himself.

“Can I ask the waitress to make him stop?” asked Bob, who found the man’s behavior not only vulgar but also ruinous to his appetite. Bob had been buttering a soft roll that our server, a Charlize Theron look-alike named Crystal, had presented to the table, mysteriously sealed in a white paper bag (“It keeps them fresh-tasting,” Stoller told me later). She looked over and gave the massage-happy VIP a severe look and he straightened like a chastened schoolboy.

Breasts or beef, what a choice! I pondered the possibilities as I turned to Serenity, who was explaining to Bob and Tony that she was taking a break from college because she had been studying psychology but had changed her mind about that ho-hum career. “What I really want to do is be a writer,” she said. “In fact, I’m writing a novel right now — a romantic adventure set in the early 1900s.”

As enthralling as Serenity’s life story might have been, what really had my attention was my dinner, the biggest piece of prime rib ($14.50) I had ever seen in my life. Practically inching off the plate, it was 32 ounces of luscious, tender beef, swimming in an herb-fragrant broth and cooked perfectly. It was beyond delicious, even if the accompanying carrots were soggy and overcooked. (Tony, swooning over Serenity, didn’t even look down at his steak.)

Bob, who had been torn between the Gala Gourmet Pizza ($6.50) and a barbecued pork sandwich ($6.50), was delighted with his final choice: the cobb salad ($6.50), a giant plate heaped with iceberg lettuce, grilled chicken breast, fresh avocado slices, and crispy bacon. I looked up from my dinner once or twice to watch various dancers — all young, voluptuous, and stunning — do their little acts on stage. At one point, our own Serenity stepped out into the spotlight and peeled off her little blue dress. A bashful fan, I put down my fork and went over to hand her a tip — I mean, I felt I almost knew her!

Still, I blushed when Serenity, now wearing only the hint of an outfit, leaned over and gave me a sisterly peck on the cheek. I raced back to the table, starstruck, and worked on finishing the prime rib and a stacked side dish of Gala Potatoes — wedges of new potatoes sautéed in parsley butter ($2.50). I stopped eating only when Crystal arrived to discuss dessert.

“The only dessert I want is Destiny,” Tony sighed, enraptured by the new dancer writhing on stage. “And chocolate syrup.”

Bob, always the pragmatic one, was torn between the warm apple pie ($4.50) and a bowl of fresh strawberries ($2.50). He finally decided to try them both. In keeping with the evening’s visual theme, I ordered cheesecake ($4.50). Both the apple pie and the cheesecake are baked for the club by an outside vendor, but they were as delicious as home-baked, especially the giant wedge of dense, creamy New York-style cheesecake, which was so decadent, I couldn’t finish half of it.

At this point our new best friend had returned to the table to tell us more about her novel and a bit of backstage gossip: “The girls really do get along amazingly well,” Serenity said. “There are a couple of prima donnas, but there’s no cat-fighting, honestly.”

By this point, I had finished my coffee and the disc jockey was introducing the blonde, tan Summer. At Gala, the show never ends (as many as 50 showgirls can perform on a busy night). It’s like a beauty pageant starring a never-ending chorus line of nearly naked, utterly silent women who shake, rattle, and roll for tips instead of tiaras.

Tony decided to “stick around and see the rest of the show,” so Bob and I made our way out the door to the valet’s outstretched palm. My wallet was lighter, my belly was fuller, and up on stage, Summer was leaning against a brass pole, shedding the wisp of a chiffon dress.

If life really is a cabaret, my friend, then Gala is the town’s liveliest place to eat a chicken breast.