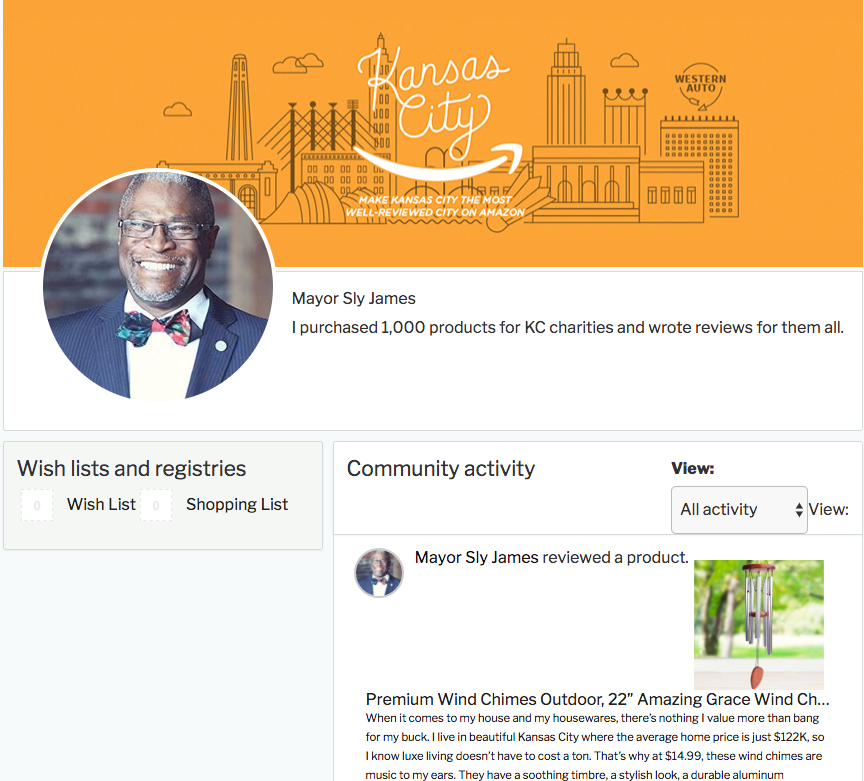 There was never any suspense about Mayor Sly James’ “special announcement” today.

Everyone in the metro knew — even before a video arrived that showed James reviewing Amazon products, surrounded by mountains of boxes in his office — that his 3 p.m. gaggle would be about the city’s bid to attract Amazon’s second U.S. headquarters. The company has said that the winning city will see a $5 billion project, and some 50,000 jobs. For civic leaders around the country, it’s an irresistible golden ticket. Others are less into it.

In any case, with open bids due October 19, James was running out of time to make a brilliant public case and get those jobs. Luckily, he knows the way to Amazon’s heart: preciousness that would make Hallmark blush. Also: puns. So many puns.

For instance, there’s the one dedicated to a DYMO label maker. “About the only thing more important than professional-quality labeling to the long-term prosperity of your start-up,” writes James (or consultants paid to come up with this stuff), “just might be the city you built it in, and Kansas City is one of the best.”

He goes on to tout KC’s burgeoning startup scene before winding up with one of those puns: “KC is DYMO-mite!”

Because Amazon CEO Jeff Bezos is widely known for his waka-waka-waka sense of humor.

This formula goes on, presumably, for all of the 1,000 products the mayor “bought” (for charity!) in an effort to woo Amazon to KC.

This seems unlikely to achieve the desired effect.

To let up on the mayor a little: At least he didn’t send a giant succulent to Seattle, as Tucson, Arizona, did. Bezos refused the cactus. And Birmingham, Alabama, has scattered giant Amazon boxes across its cityscape, which is both obvious and messy. Stunts and gimmicks abound.

Among the communities more, uh, Amazon-prime (this is not just a pun!) are Chicago (almost as central but more populous and far more able to move workers via mass transit) and Boston (large, highly educated workforce, better public transportation). The list of fair choices goes on.

But Amazon doesn’t need any of us. It gets to plant a mega footprint in a non–Washington state metro because we need it. Whatever jobs or economic impact might be claimed by the winning city hall, everybody knows that the only true beneficiary will be Amazon. Don’t think of it as a Fortune 500 company setting down roots. Think of it as an already filthy-rich sports franchise asking for a handout to come here — and then leaving out its hand indefinitely, under threat of downsize or departure.

This isn’t going to go James’ way. But not getting Amazon is fine for the rest of us, who need the city to concentrate on one or two fiascoes at a time. There’s an airport vote coming up. Maybe this isn’t a good time to introduce more rah-rah hashtags (#KC5stars, chime very few of us) into the conversation.

Following the rollout of the mayor’s Amazon “news,” someone tweeted at him: “Too bad our airport sucks.”

“Not for long if all goes well November 7,” James tweeted back.

As usual, Sly gets four stars for optimism, two and a half for realism.