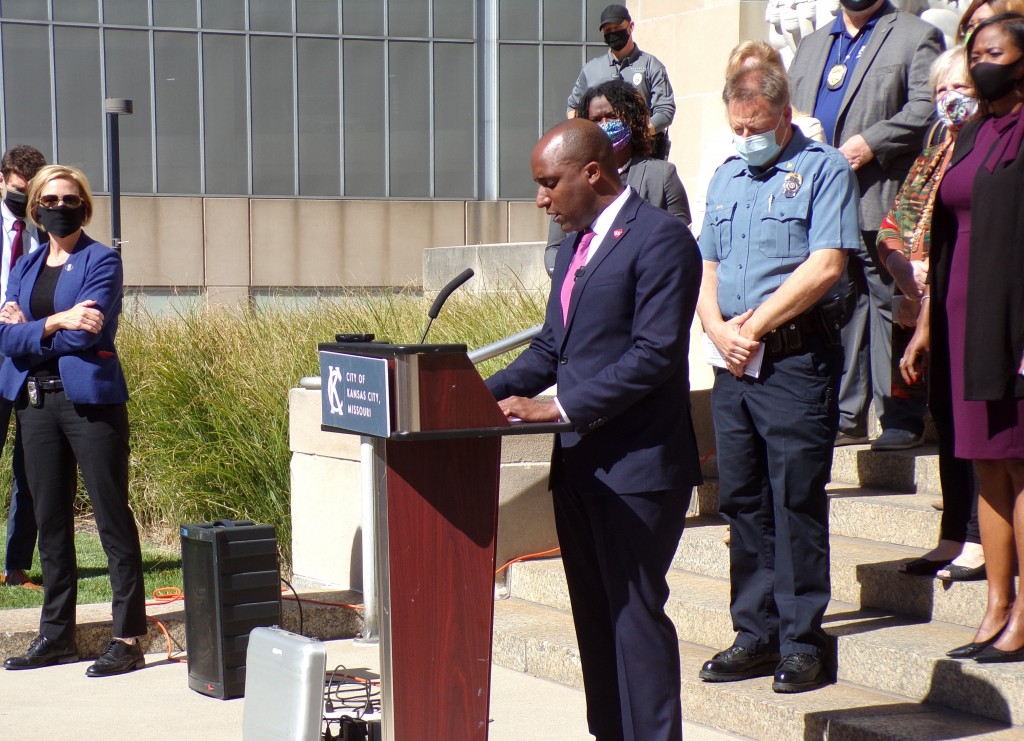 On May 20, Mayor Quinton Lucas and several other city councilmembers surprisingly pushed through his plan to decrease police funding by 20% and redirect about $42 million to crime prevention and other social services. Now, Missouri Republicans are criticizing the plan—resulting in national coverage.

“It’s a dangerous time,” Rep. Doug Richey, of Excelsior Springs, says in a KCUR article. “Kansas City is looking at some of the highest rates of homicide and violent crime in its history and now we’re jacking with the funding of the police in this way? It’s not defensible.”

Mark McCloskey, a U.S. Senate candidate for Missouri, “strongly condemned” the plan and Lucas, saying in a press release he “recklessly changed his own police force’s funding mechanism.”

“Mayor Lucas may have pleased anarchists and radicals, but he’s endangering the public,” McCloskey says. “When the radicals and their media apologists cry ‘Republicans Pounce,’ that means we’re not backing down. “And when radical leftists say, ‘no big deal,’ be very concerned. You don’t change the funding mechanism for the police and then tell common-sense Missourians ‘nothing to see here.’”

Republican lawmakers and members of the Northland city council are now asking for a special session to override Lucas’s plan.

The criticism and outrage over an attempted “money grab” grew loud enough that it caught the attention of the national eye. On Friday, Lucas sat down for an interview with Fox News, who claimed Lucas was defunding the police.

“If you take money from something and put it back into that very same thing, then you actually haven’t defunded anything,” Lucas says during the interview.

Lucas has taken the criticism in stride, wondering why Republicans who “know nothing about the violence affects the city” and are “picking culture war arguments with a Fox News audience,” reported KCUR.

However, opposition to the plan is beginning to come at Lucas from every angle. The Kansas City Board of Police Commissioners voted 3-1 during a closed meeting Monday night to seek a potential lawsuit against Lucas’s plan. Lucas was the only member of the board to oppose the lawsuit. In a tweet Monday night, Lucas says “We just want to stop the murders.”

We just want to stop the murders.

Update May 26th, 2 p.m.—A statement from the mayor is included below:

“While I welcome my Republican friends’ newfound interest in the plight of Kansas Citians, particularly in our inner-city neighborhoods, respectfully, our community, my community, has been in a violent crime crisis for my entire lifetime. With more than 100 murders per year in Kansas City for generations, we have to work non-stop and creatively to fix our serious gun violence problem, not continue to look the other way as our state legislature majority has done for too long.

Our plan increases funding to the police department while we also as a city and with separate investments are addressing the root causes of crime, like poverty, lack of adequate mental health, and housing instability. Thousands of my brothers and sisters have died on Kansas City’s streets since the 1980s. The crisis has long been here. While new to some legislators, it’s not new to Black Kansas Citians. I hope our legislature, rather than using cities as a talking point to appeal to their base, works with us, as we respect our police, our educators, and our health care establishment to actually make a difference in outcomes for our city and work with us to make Kansas City safer.

For those legislators interested, I am inviting them to join me and neighborhood leaders on a walking tour of our neighborhoods most consistently impacted by violent crime. We all have to work together on solutions to this problem and we all know funding in one area alone will not solve all our problems.”