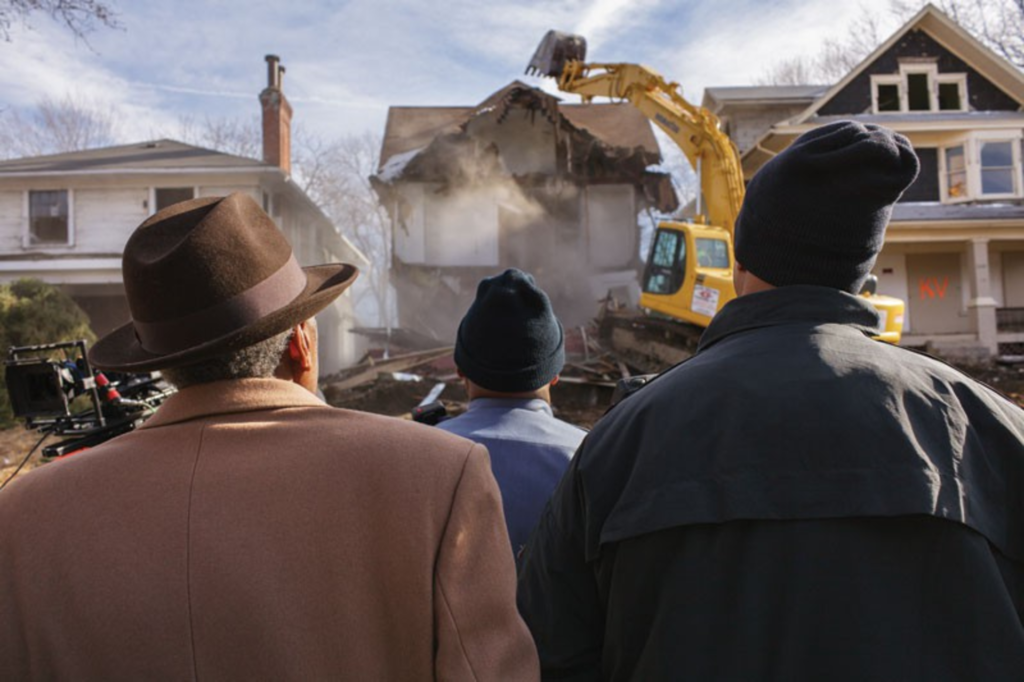 Some of the reunited had come to greet photographer Matt Rahner. The rest were on the walls of the Central Library’s Genevieve Guldner Gallery, captured in Rahner’s images.

Stirred by a Pitch cover story (“Blight Flight,” by Matt Pearce, August 16, 2012), Rahner set out to document the dissolution of their Wendell Phillips community when its four square blocks — bordered by Prospect and Brooklyn avenues, between 26th and 27th streets — were taken by the city in 2012 to make way for a police station. Now, at the March 21 opening reception for his exhibition — plainly and accurately titled Eminent Domain — he accepted warm congratulations from Anita Briggs, Ameena Powell and their friends, people now mostly scattered across other parts of the city.

Rahner’s photos capture a community on the verge of extinction. The faces show reluctance, disgruntlement. Elena Herndon appears in pain, Joe Watson as though he’s ready to fight. Briggs, with daughter Stephanie and Samantha the beagle, huddle together, maybe for support. Pookie stands in front of her white limo, casting a deadpan yet comely look as if daring the viewer to say something. The Hadley brothers, dressed to the nines, strike a defiant pose in the street. Rahner contrasts his living subjects — and 19-year-old Marcus Lyman, since slain — against his photos of abandoned rooms, empty lots and naked curbs, exposures of landscapes opened once the structures are removed.

The exhibit also holds found objects — a pile of bricks that once housed one or more families, abandoned photos of children, a Bible, personal checks from 1956, a child’s rocking-horse swing. Things from lives lived, forever keeping the secrets of the people who left them behind.

“I’m interested in portraiture and the representation of people and how they represent themselves,” Rahner says when I ask him about the show’s roots and its unsentimental title. “My camera acted as a stand-in to gauge a reaction to the city’s power.”

The power of eminent domain, in this case. To combine the Kansas City Police Department’s East Campus project with its East Patrol Division station and crime lab, the city bought and then began bulldozing this swath of the crime-ridden East Side. Rahner notes in his online introduction to the exhibit that, of 24 sites considered for the project, Wendell Phillips had the highest rate of occupancy. City Hall’s rationale for displacing residents is summed up in one of the objects exhibited here, a brick from the groundbreaking of the new police station and crime lab. It reads: “Investing in Our Community One Brick at a Time.”

“This story drew me in, a combination of people and power … the ability of the government to take as if at will,” Rahner adds. “It did not match up with what the community wanted. The neighborhood was never asked. I remember one resident saying, ‘I was never asked what I thought about what to do about crime.'”

Rahner, a 33-year-old adjunct professor of art at Missouri Valley College, didn’t set out to show an objective view with what he says is a mix of documentary and art. “I only wanted the view of the residents and the destruction, not the reason of the destruction. It was to give voice to the people not asked about what they thought. My suspicion is, people didn’t want to leave.”

Anita Briggs didn’t want to. Her now-razed house was built in 1898 and had been in her family for 25 years.

“I miss my home,” she says. “It was organized the way I wanted it. My mother, my grandmother, my grandchildren all stayed there. These are the things I can’t get back. And I miss my neighbors. They were like an extended family.”

Briggs seems satisfied with what the city paid for her home. But compensation alone wasn’t the point. “The money will never duplicate what I had,” she says.

Briggs has moved on as best she can, but Ameena Powell has fight left in her. She’s challenging the city’s condemnation of the neighborhood, acting as her own attorney and appearing before judges with briefs she has written. More than 100 lawyers turned her down, she says. She next appears before a judge on April 23.

The East Campus project is now called the Leon Mercer Jordan Campus, in honor of the assassinated civil rights and political leader. The $74 million development is set for completion in the winter of 2015–16. It’s an even bet whether Jordan would have supported the four-block destruction of the Wendell Phillips neighborhood.