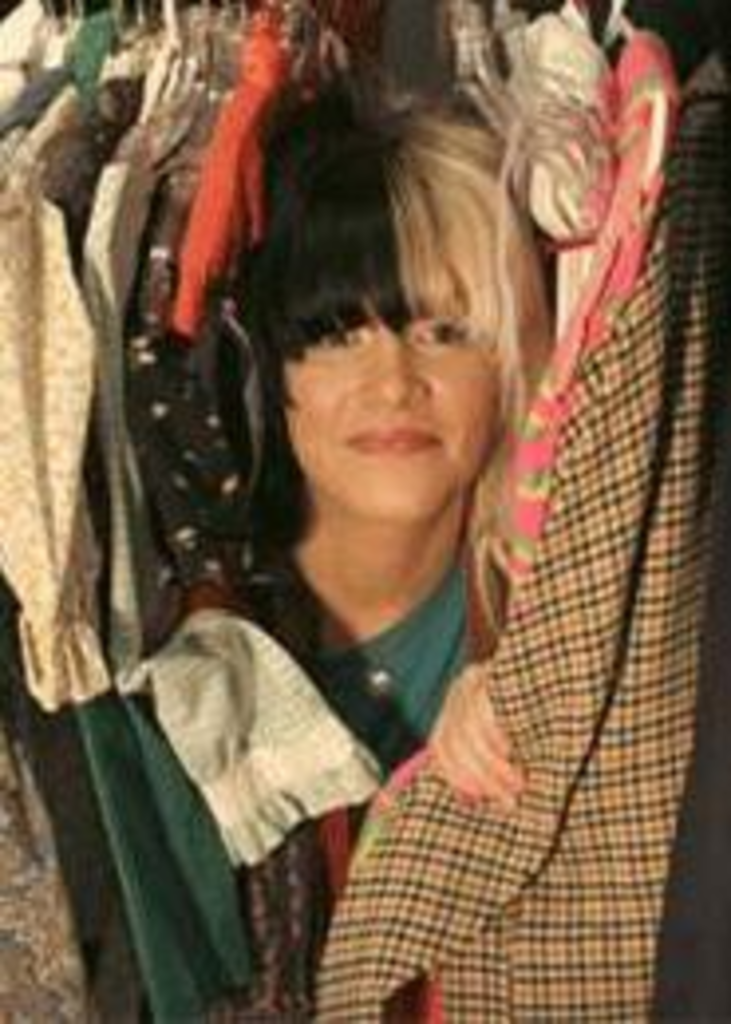 Describing Peggy Noland’s outfit is a challenge: On a rainy afternoon, the spunky designer is clad in a pair of navy-blue sweatpants tucked into weathered cowboy boots. (“The Salvation Army’s half-off on Wednesdays!” she says cheerfully.) On top, she wears an old red T-shirt with a stylized portrait of a woman whose accessories — sunglasses, a pair of gigantic fish-shaped earrings, a floppy hair bow — are appliqued on. Topping it off: a corduroy vest. Kooky as the outfit is, it’s not really complete until you see Noland’s hair, a shaggy two-tone mix, platinum on one side, jet black on the other, that brings to mind Cruella De Ville.

Anyone who can make sweatpants look halfway stylish surely has other tricks up her sleeves. The 23-year-old Independence native has been hard at work on her eponymous line of clothing. “I was always into vintage clothing,” Noland explains, “but it never fits anyone right. I’d use safety pins to get it to fit myself, and it evolved from there.”

After a few years of DIY-style tailoring and needle-and-thread work, Noland raised the bar for herself, moving four years ago to a sewing machine and a serger (the contraption that finishes hems). And she realized that others maybe wanted in on the Noland magic.

Spool owner Hadley Johnson, for instance. Johnson carries Noland’s clothes at her 18th Street boutique and can’t praise her style or enthusiasm enough. “She does amazing blazers. You just want to be surrounded by her and her passion,” Johnson says.

“I make what I like instead of what I think other people might like,” Noland says. It’s an attitude that informs the look of Noland’s collection, which locals can also buy at Revue. For spring, she has designed an edgy but sweet collection: leggings detailed with bows at the ankles, plaid capelets with ruffles, tops made from vintage barkcloth with heart-shaped buttons, a chiffon top that recalls an old-school bed jacket. The overall feel is playful and pretty — as Noland says, “not too weird but not too easy.”

There’s also the matter of the romper — a tube top with attached pants that Noland’s fans have declared a hit. “I know these are unflattering. You look like you should have a cigarette in your mouth and a baby on your hip when you wear this — that’s not necessarily a lifestyle that’s attractive to people.” Noland is too modest to admit her own successes, but every woman around town who has worn one of these has looked way cuter than she would have in something from Urban Outfitters (yawn).

Her electric-purple labels say “Peggy Noland Kansas City” in white print. “I’m proud to be from Kansas City,” she says. “I really respect what people do here. They put a lot of work into it.” Even when she’s out of town, the designer prefers the work of her hometown colleagues. “I went to some trade shows for Revue, and I wasn’t intimidated by the cute girls from Tokyo with their cute lines. I’m more impressed with what’s going on locally.”

And we, Peggy, are impressed with you. — Rebecca Braverman