Martinez Hillard is building Kansas City’s music community, one show at a time 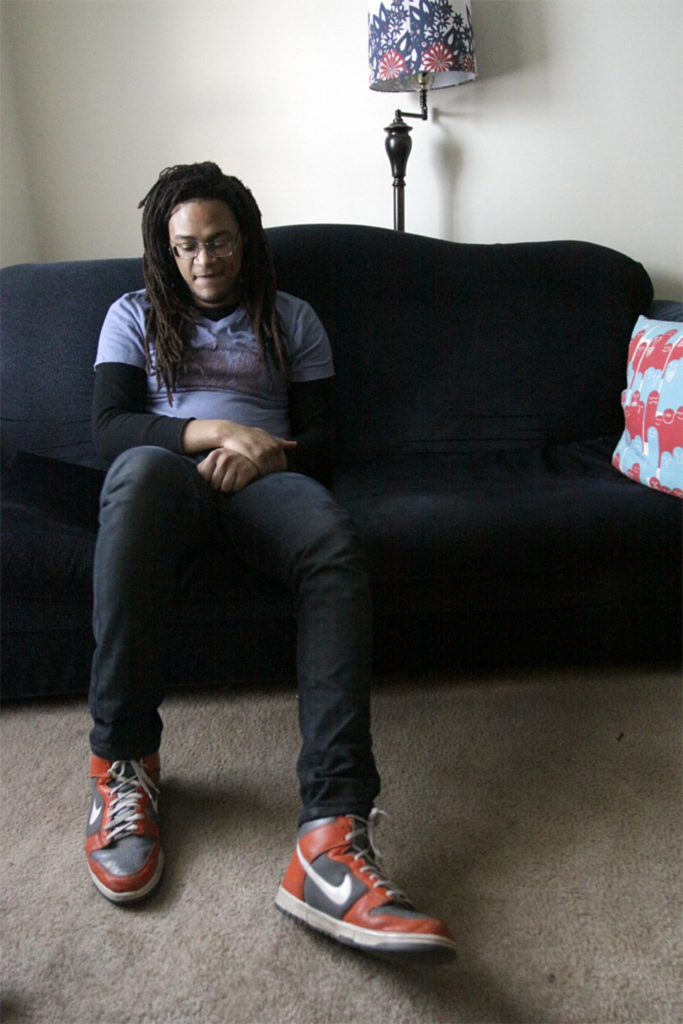 Perched on a scuffed bar stool in Lawrence’s grungy Harbour Lights, the tall, dreadlocked musician explains what attracts him to a scene that can be tough on newcomers and tougher on stalwarts.

“When I moved to Lawrence in 2007, a lot of people were telling me that local music sucks,” Hillard says. “We were looking to our fellow musicians and saying, ‘There’s great opportunity here, and if we put a spotlight on it — gave people more incentive to be a part of it — then they would be enthusiastic again.'” Thus was born Oh!mr, an online zine created by Hillard and his bandmate C.J. Calhoun, both members of Lawrence’s progressive-pop outfit Cowboy Indian Bear.

“The audience we’re seeking is people that connect to music in a more emotional way,” Hillard says. “Ideally, that’s what we’re aiming for.” He pauses, the rhythm of his thoughts interrupted by the pool-table clatter in the bar. “I just saw a cue ball fly,” Hillard says, laughing. “Sorry.”

It’s not hard to understand why Hillard succeeds as one of the Kansas City scene’s most visible, well-liked musicians and concert promoters. His approach is driven far less by money than by an open-minded egalitarianism that pairs devotion with optimism. (The description on his MySpace page for Oh!mr reads: “Makin’ it happen.”)

Altruism aside, though, Hillard’s investment in what’s coming out of the mouths, microphones and amps of local musicians is real. “I’m always interested in what other people are doing because I already know what I’m doing,” he explains. “I’d rather be an encouragement than have someone come up to me and say I’m the shit.”

Hillard’s version of support consists of more than raising awareness about new acts. To develop a strong music community, Hillard says, there’s no substitute for genuine human interaction — whether between musicians or fans, or both. “That’s really where it begins — people taking the time to engage people they don’t know very well and stepping out and saying, ‘Here’s who we are.'”

For him, creating a vibrant music community isn’t just about booking shows or encouraging local acts. It’s about respect. “Sometimes I feel that expression is just as essential as execution,” Hillard says. “That’s just as much a part of the human experience as anything — being able to say something, being able to express something — whether people like it or not.”

The soft-spoken Hillard continues: “It’s really easy to write off a band and say, ‘What were they thinking?’ But once you see that they think very similar to the way that you think, then you appreciate it a little bit more.”

His now defunct publication set out to generate that kind of appreciation. With its locally minded interviews and reviews, Oh!mr functioned as a music blog until 2008, when the project went offline (due, Hillard says, to problems with its host server). Today, Hillard’s booking and promotion further the Oh!mr cause. The goal is the same: to create a stronger, more supportive network for local artists and their fans in Kansas City.

And he knows how to do it. Born in Frankfurt, Germany, Hillard settled in Topeka in 1993. There, he began playing music in high school, jumping from band to band and igniting several projects. In 2007, he moved to Lawrence to pursue an internship in concert promotion with Pipeline Productions. He immersed himself in Lawrence’s music scene by reaching across genres and booking bands from different music circles.

With the expansion of the blogosphere, Hillard worries that personal connections between bands and their fans are beginning to evaporate. “Obviously, there are humans behind it, but there’s not a lot of humanity in it. Whatever buzz is, or hype, that’s not what I connect with when I listen to music. Even if you can’t connect with music through the Internet, you can go out to a concert and have a tangible experience.”

Playing matchmaker between local acts and would-be fans is a struggle that Hillard confronts with every new event. It’s harder than ever to fill a room with an enthusiastic crowd, even for nationally respected artists, especially now that bands don’t tour the same way that they used to.

“I don’t think anybody’s getting great shows consistently the way that they were two years ago,” he says. “You want to have well-toured, well-traveled artists, and you want to have a few buzz bands in town. I think we’re starting to see fewer of both. On the local show-promotion side, we keep our costs low and we do things that are conducive to a more familial experience that fans can be a part of. But as far as the future on the whole, I can’t even begin to speak to that.”

Hillard isn’t sure about the future of Oh!mr, either. “I think resurrection is — I don’t even know if it’s the appropriate word.”

Achieving a balance between his growing music career and the business of concert promotion is difficult. Booking and promoting shows is a passion, but Hillard and Calhoun know that one success may eclipse another.

“We share an equal emotional investment in Oh!mr, but we both recognize where our priorities lie,” Hillard says. “Considering everything that has been going well with Cowboy Indian Bear, it would be a great disservice if we didn’t follow down that path.” But Hillard isn’t letting the acclaim that Cowboy Indian Bear has garnered cloud his vision of what Kansas City can be.

“When things go really well, that’s when I get super giddy,” Hillard says with a grin. “There’s a lot of ecstasy to it [making music]. It’s something that you really can’t describe that you’re trying to get at. And when you do touch it, there’s nothing more gratifying.”

Speak up, Kansas City. Hillard is listening. And he’s not the only one.