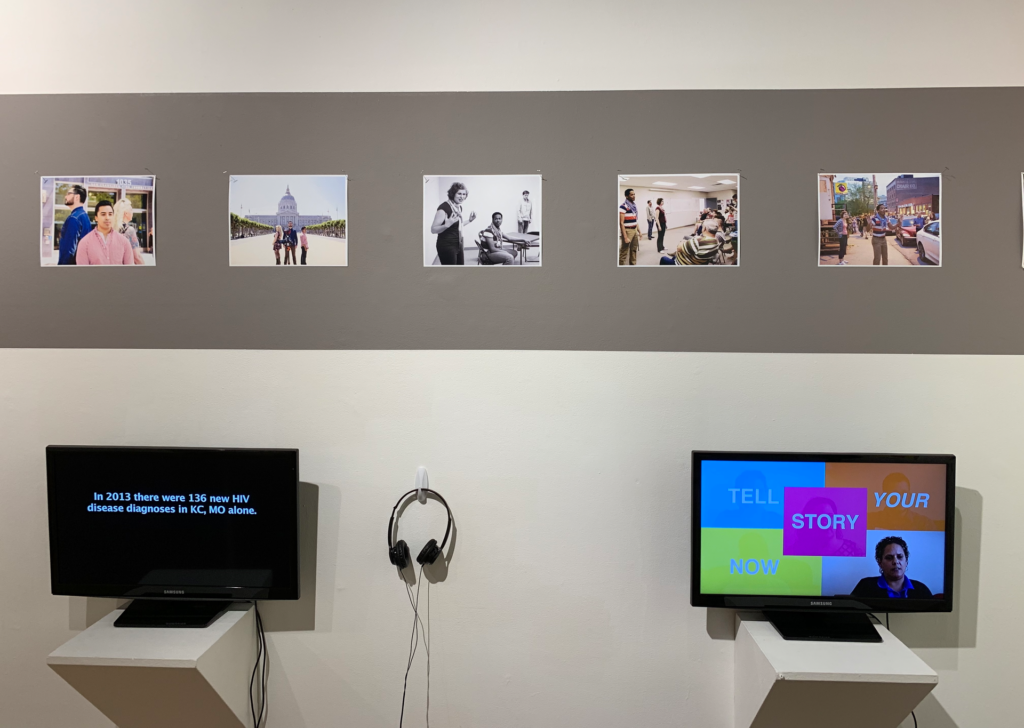 In a crowded back gallery at Leedy-Voulkos, a wall is covered with screen prints featuring a Coke bottle silhouette with words in Swahili that translate to, “Some people think you can get HIV/AIDS from utensils, dishes, or sharing food, but you can’t.” It’s a clunky rewording of the 1980s San Francisco AIDS Foundation PSA that said, “Some people think you can catch AIDS from a glass. You can’t.”

These prints, repeated in a variety of colors, are part of “Mapping Stigma,” a new exhibition that features an archive of Contracting An Issue, a socially engaged art project by G.K. Callahan around the issue of HIV/AIDS stigma. The gallery overflows from floor to ceiling with video screens, a memorial altar, screenprints, paper works, banners, an informational table, and more.

According to Contracting An Issue’s website, which hasn’t been updated since 2017, the heart of the project is a performance series of spoken-word medleys based on interviews done around the topic of HIV/AIDS and stigma. At Leedy-Voulkos, the scripts use quotes from those interviews, chopped up and woven together. The performances, displayed on video screens, can be viewed one person at a time, with headphones.

During the First Friday gallery opening, in May, the audio and video quality of both were surprisingly poor — inaudible, even. One video depicts a spoken word performance by three actors in a medical office waiting room. The actors give lines referring to sexual, medical, and social experiences related to HIV/AIDS. They occasionally speak over one another, and large text scrolls across the screen. The concurrent speaking and scrolling text makes it almost impossible to discern either. The second performance is a shaky recording of a live performance in Kansas City, featuring the same style of performance: three actors performing spoken word.

One problem with this format is that it deprives the audience of the context necessary to give these performances meaning. Without understanding anything about who is speaking, how do we invest in their experience? How credible is their opinion? Anonymity is understandable. But simply attributing words to voices from the community is insufficient. Did the minds behind this project interview people in their personal networks? Did they put out a public call? Did they seek diverse perspectives and identities? De-contextualized quotes do not serve well a topic that is both personal and political. As a result, rather than reacting with empathy for those living the experience, or a greater understanding of the issue at hand, these performances leave little impact.

Across the room, Callahan attempts to connect HIV stigma in America to its counterpart in Tanzania. But stigma is culturally specific. The similarities pretty much start and stop at “People with HIV/AIDS are stigmatized.” The hows and whys of that stigma — any deeper cultural understanding — goes unexplored here. The wall text says “…while HIV/AIDS education in the United States has evolved, the evolution is much slower in other parts of the world.” But the reality is that our societies and histories are different, and how stigma is produced and overcome are different too.

Callahan travelled to Arusha, Tanzania, to work with a group of HIV+ women called Zekana. These women live and work together, making money selling their paper goods. The Zekana women’s works on paper are presented side by side with collaborations with Callahan and papermaker Seppo Hallavainio, as well as works by Callahan as a response after his trip. Browsing, it’s hard to discern who made what, a disservice to the overall work. 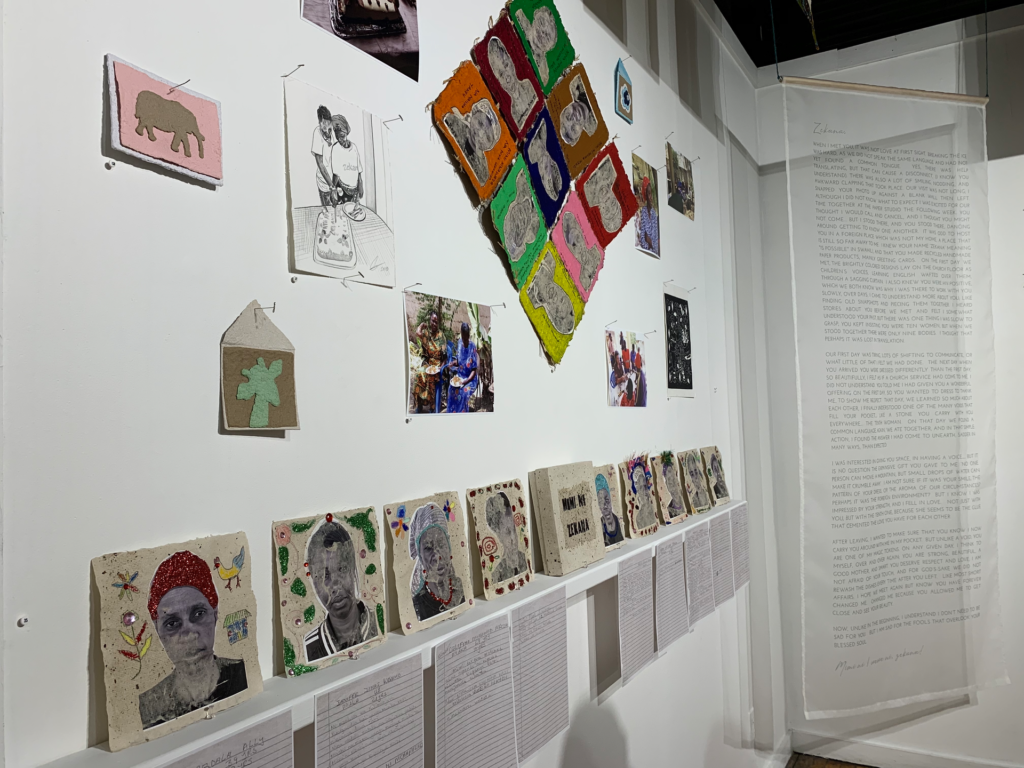 On a long white banner hanging from the ceiling, we see a letter Callahan wrote to these women. It describes how much his experience in Tanzania meant to him. In a regrettable and inadvertently ironic choice of language, Callahan even refers to these women as a “magic token” he now carries with him. Tokens, indeed. It is hard to escape the conclusion that this is a white, male, American artist using the faces and work of Tanzanian women to prop up his own status. It all feels very shallow — a tourist’s look at the lives of a foreign culture.

Handwritten passages on copied notebook paper are hung underneath each woman’s photo. I presume they are written by the pictured women, but they are untranslated. By typing some of the passages into Google Translate, I can see the writers mention how many children they have, when they received their diagnosis. I can parse just enough that it’s clear a professional translation would’ve added a lot to this exhibition.

Where this exhibition succeeds — where the stigma around HIV/AIDS is displayed with potency, specificity, and creativity — is in the corner dedicated to Robert Raymond Smith, who died of AIDS in 1995 (as shown in his death certificate on the wall). It includes two shrines and artworks by Smith’s partner, Bruce Burstert. When thinking about HIV/AIDS in America, it’s easy to get buried in the statistics, overwhelmed by the enormity of a generation of gay men decimated in the richest country on the globe. This small memorial to Smith allows us to see the impact more clearly. Burstert describes, in the wall text, both the day he met Smith and the day Smith died. There are photos of Smith, of their life together, and watercolors painted by Smith. In these details — a photo of their dog, one of Bustert and Smith together in a garden, a condolence card from a friend upon hearing of Smith’s death, the desk calendar page from the day of his death — we see vividly the very real, tangible, personal impact of HIV/AIDS and the stigma that surrounds it.

“Mapping Stigma: An Archive of the Contracting an Issue Project,” curated by Blair Schulman, is on view at Leedy-Voulkos Gallery through July 27, 2019.