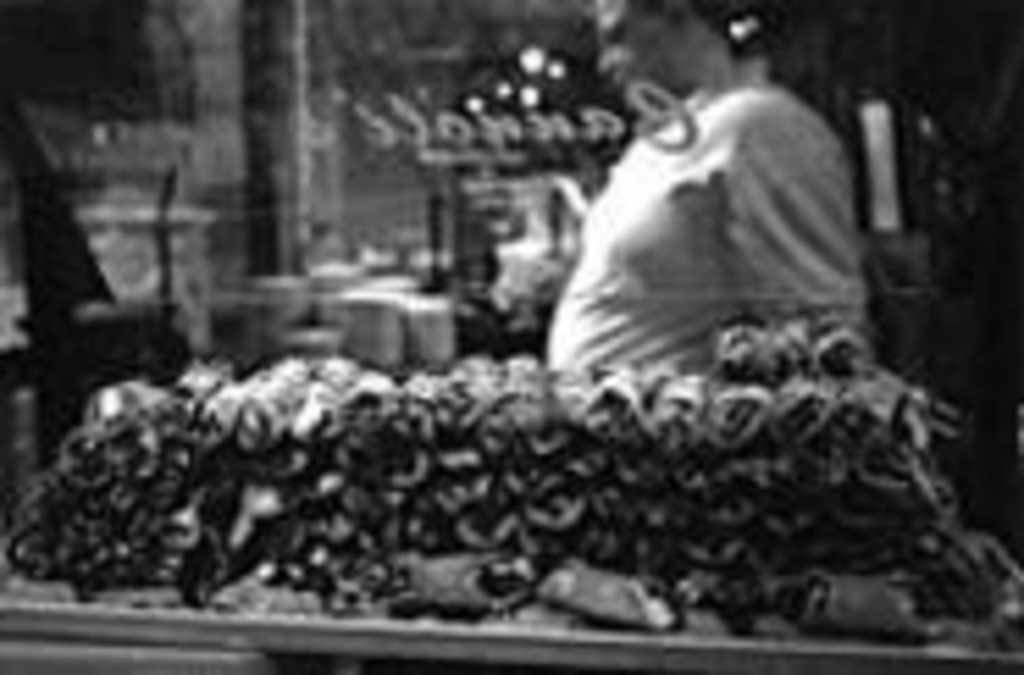 Cinzetti’s was built on the site of the old Glenwood Theater. It’s not much to look at from the outside, but the free-standing brick building boasts an interior as atmospheric as any 1920s picture palace. Its theatrical auditorium — a feed-o-torium, in the case of this buffet — has been artfully designed as a faux Tuscan “piazza,” with cobblestone floors, stucco and stone walls, and lots of props evoking an outdoor market. From a visual standpoint, the place deserves an ovation: The kitchen beautifully presents as many as eighty different dishes, many of them surrounded by set decorations like piles of shiny black eggplant, glossy peppers or cans of Italian tomatoes.

“It’s like eating at Disneyland!” said my friend Marie.

“No, it’s like a buffet at an upscale Las Vegas casino,” said her husband, Jim. Just walking through the different serving stations, he said, was “total sensory overload.”

Marie and Jim, who live in Johnson County, sheepishly confessed that when the restaurant first opened, they thought it was going to be like Dean & Deluca, a combination market and eatery. So, they walked in one day to do some shopping and discovered that the place is an Italian market only in the figurative sense. A real outdoor market in Italy, of course, would have more vegetables, better bread, patrons smoking cigarettes and people yelling at each other.

But instead of a snaggletoothed fishwife hawking planks of raw seafood, Cinzetti’s has a neatly coiffed young man in a starched white jacket standing over a pan of deep-fried cod. Many of the young waiters and waitresses seem to have been hired for good looks rather than for intelligence and attentiveness, which just adds an extra cinematic dimension. I’ve seen demicelebrities in the place (a couple of local TV personalities and one obnoxious actor) as well as the usual buffet devotees who greedily load food on their plates as if, starting tomorrow, they will be forced to eat only bread and water for the rest of their lives.

Depending on who’s sitting at nearby tables in one of the six dining rooms, a meal at Cinzetti’s can be La Dolce Vita one night and La Dolce Lard Ass the next. One night I watched two Cellulite Sisters shovel food into their gullets like cartoon characters. In contrast, a perfectly composed nuclear family at another table meticulously nibbled on salads and cubes of fresh cantaloupe before getting up from the table, setting off for the serving area and returning with … more salads and clusters of grapes. I was impressed with their discipline, which I certainly didn’t have on any of my four visits to the restaurant. I mean, if all that stuff — “over sixty genuine Italian recipes,” brags the restaurant’s brochure — is out there, wouldn’t you want to try all of it?

If you go, you must. Cinzetti’s is a terrific bargain, especially by local buffet standards. But be warned: Not everything tastes as good as it looks, and consistency is a problem. What tasted divine on one visit — say, those chunks of crispy fried cod with lemon caper sauce — tasted like breaded Styrofoam with citrusy cornstarch paste the next.

For diners who know Italian fare only as spaghetti and meatballs or pizza, Cinzetti’s is an inexpensive and entertaining way to broaden one’s culinary horizon — sort of. The kitchen never made “lasagna Bolognese” and “rigatoni Bolognese” in real Bolognese fashion (which requires a pretty substantial meat sauce, unlike the anemic version here). And even though it does boast lots of bacon, the watery farfalle carbonara isn’t made with egg yolk and parmesan like the real thing.

Frankly, I found all of the pasta dishes lacking. They’re made in small batches so that each pan seems relatively fresh, but as soon as the cook puts the boiled pasta into a pan and sautés it with various ingredients, he places it under a heat lamp or on top of a warm surface, and the sauce soon acquires the consistency of glue.

The selection of pizza (including the pineapple-dotted “Hawaiian” version) also suffers from sitting under those heat lamps for more than a few minutes and would benefit from a thinner, crisper crust; the chewy dough gets leathery pretty quickly. Also disappointing are the meatballs, spongy and light and as small as canapés. I wasn’t sure why I preferred the preportioned lasagna — which neither looked nor tasted like any lasagna I’d ever sampled — until my second visit to the restaurant. That’s when I had an epiphany: It tasted like the “Italian casserole” served in my high school cafeteria. Not bad, just not lasagna.

What about the good stuff? There were plenty of things I actually liked, starting with a superb house Italian salad, tossed with bacon and blue cheese and drenched in a dressing that had an unexpected bite. Forget the Caesar salad — which isn’t really Italian anyway. Far better is the pancetta salad, made with giant, fluffy squares of focaccia; or a roasted-pepper version; or a concoction of plump mushrooms marinated in balsamic vinegar. I would have liked one of the “freshly baked Italian breads” with my salad, but I kept forgetting where to find it — in the middle of the dessert station, between the hot apple crisp and the profiteroles.

If I’d only discovered the bread, I might not have devoured so many deep-fried arancini rice balls or slices of pizza with my salad and, later, with soup. The restaurant’s robust minestrone is thick and hearty, not the tepid little vegetable broth I expected to ladle into my cup.

On the subject of robust: The cooks are timid when it comes to using garlic. Chicken “spiedini” (really slices of stuffed chicken breast) needs a lot more of the fragrant herb, and so do the garlic mashed potatoes. Spices get a better workout in the intensely seasoned, moist and tender Tuscan rotisserie chicken. The greasy chicken cacciatore is flavorful enough, though it also needs a little more garlic and rosemary. Even the slices of sausage tossed with hunks of red and green pepper are mildly spiced.

“But this is Johnson County,” Marie chided me. “People don’t like things too spicy here.”

They do like things sweet, though, so the dessert selection is lavish. It even includes a glass-topped case of what Cinzetti’s calls “gelato” — it isn’t. Instead, it’s good, creamy Belfonte ice cream. Tiramisu is also made elsewhere and served here in tiny dollops in metal dishes; it’s nice and fluffy and tastes liqueur-free. The rest of the desserts are made in-house, including big pans of excellent hot apple or apple-raspberry crisp; lovely little glazed profiteroles; and the Cinzetti’s version of a “budino,” a puffy little pastry with a melted chocolate center.

Here, no one will give a damn here whether you eat five or fifty desserts. You pay the bill, you write your own ending.