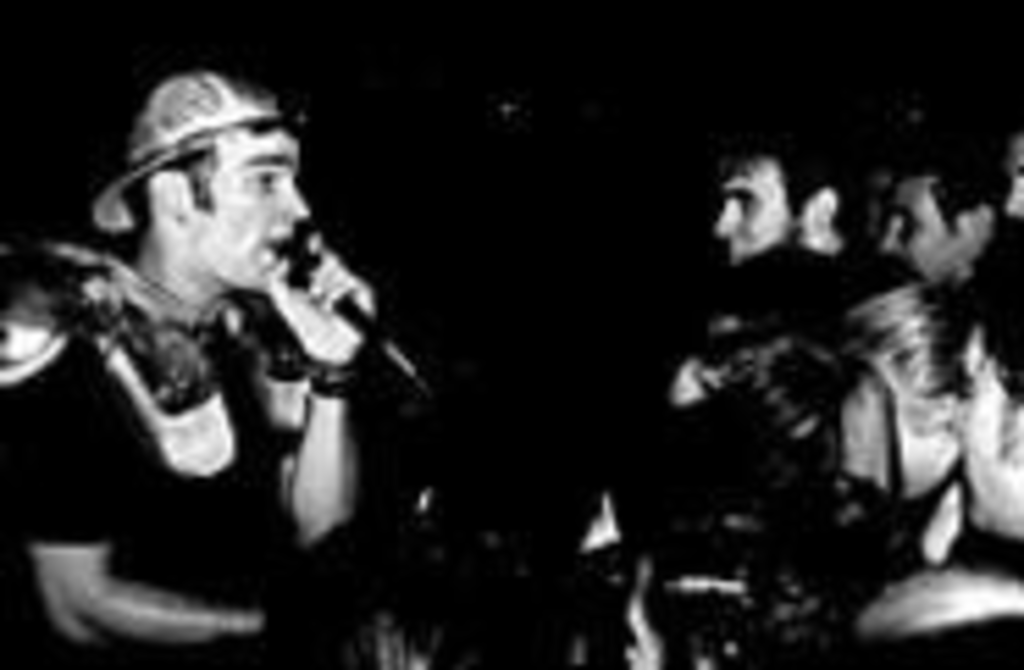 The crack staff at Vagrant Records claims to have first come in contact with Reggie and the Full Effect, or rather the lost tapes of Reggie’s work, in early 1999. Myth has it that the tapes were salvaged from a fire that swept through Memphis more than a decade earlier, consuming the “legendary” White Chocolate Studio and most of Reggie’s life work. The good people at Vagrant rushed to release Promotional Copy that next year (following up Reggie’s obscure ’98 Second Nature-release Greatest Hits ‘84-’87), and with that, a legend was born.

But that’s all a lie, except for the part about the releases’ spawning Reggie’s legend. In reality, Reggie is the brainchild of one James Dewees, local music-scene scion and international playboy. Besides working with his other bands, Coalesce and The Get Up Kids, Dewees apparently had nothing better to do than write outrageous and clever songs, record them and concoct an unbelievable story to accompany the finished product.” We just started doing Reggie to have some fun,” Dewees retorts, “and then I think someone at the record company made that story up or something, and now it’s got a life of its own. So everything that happens to Reggie now is news to me, but that’s the way it usually is: news to me.” Few people buy that story anymore, but recently everyone’s been buying Reggie — at least on its inaugural U.S. tour.

That seems to baffle Dewees. Reggie and the Full Effect, a side-project started on a lark, has been playing to packed houses since heading out on the road earlier this month. “It’s weird,” Dewees says. “Kids show up and know all the words and hand movements.” Hand movements? “I don’t wanna give away what goes on,” he teases, “but there are bears and roses and gongs and Vikings and Backstreet Boys. We got it all. All on one stage, usually a small one, with lots of people standing around.”

This fantastic stage show seems as implausible as the Reggie myth, but Dewees’ cryptic descriptions of the group’s wild concerts make it seem possible that any of the items on that list, save the Backstreet Boys, could indeed make an appearance. (And if A.J. falls off the wagon, who knows?) After a recent show in Chicago, one fan sought out Dewees after the show to point out to him the similarities between Reggie’s performances and those of the regionally popular rock group Kiss. “Without all the lights and costume changes and pyrotechnics,” the young hipster added as a disclaimer, “but in the right mindset, it’s like going to see Kiss.”

There’s no telling what kind of mindset that Windy City fan was in that night, but the spectacle of a Reggie show is such that it doesn’t take much to make Gene Simmons out of Dewees in your mind’s eye. And it doesn’t take many drinks to make that metamorphosis happen, because unlike the other bands Dewees is known for, Reggie and the Full Effect makes a nightly point of eschewing cool for comic relief.

Maybe that’s why so many people from both sides of Dewees’ divergent musical paths can find something to hang their hats on with Reggie: It’s music that doesn’t come with any baggage or the pretense of being hip (though at times there’s an abundance of kitsch). There are no labels (such as punk or emo) hung around the band’s neck — Reggie’s songs are what they are. Some of the tracks on Promotional Copy sound straight outta the Get Up Kids fakebook, some sound like Kraftwerk outtakes and still others get totally schizophrenic, combining rap-rock stylings with sensitive lyrics sung completely in earnest. It’s as if Richard Hell and Elvis Costello switched bands for a record and had Brian Eno combine the results.

Actually, that scenario’s not a far cry from what Dewees himself has done: played drums in Coalesce, a seminal Midwestern punk band; moved on to keys for The Get Up Kids, the group held aloft as both idol and effigy for the genre it helped define; and finally indulged his funny bone and penchant for showmanship on an Ed Rose-produced record that has as many legitimately hilarious songs (“Dwarf Invasion ftr. Common Denominator”) as it does solid ones (“Thanx for Stayin'”).

As good as the music is, Dewees claims it’s Reggie’s stage wizardry that really puts the fans in the seats. “A lot of people are coming to the show like it’s a movie, like ‘Don’t tell me what happens; don’t spoil the show,'” Dewees explains. Reggie and the Full Effect leaves its audience in suspense until the end, and few, it seems, are disappointed — unless they’ve come looking for some Kiss-style pyrotechnics to end the night. Not that the group hasn’t tried; it’s just that Reggie’s dubious reputation for dealing with fire precedes him (usually in the form of a press kit), and Dewees refuses to put his fans through the same faux-flame experience he was forced to endure. “I saw this Magnum episode where they had a volcano but they couldn’t use real fire so they got this red, transparent paper that was supposed to look like fire, but it sucked,” he recalls. “I won’t stoop to that on stage.”

As for what Dewees, or Reggie, or whoever, actually will stoop to do on stage, no one’s saying. People line up to see it and keep quiet afterward, which makes the whole thing sound like a cult. Not to worry, says the leader. The band, the show, the music — “It’s all just an attempt to be as fun as possible,” Dewees says. “To see how far we can go being silly and still have kids come to shows.”