Making Movies’ Enrique Chi on the band’s latest, I Am Another You, ahead of Friday’s RecordBar show 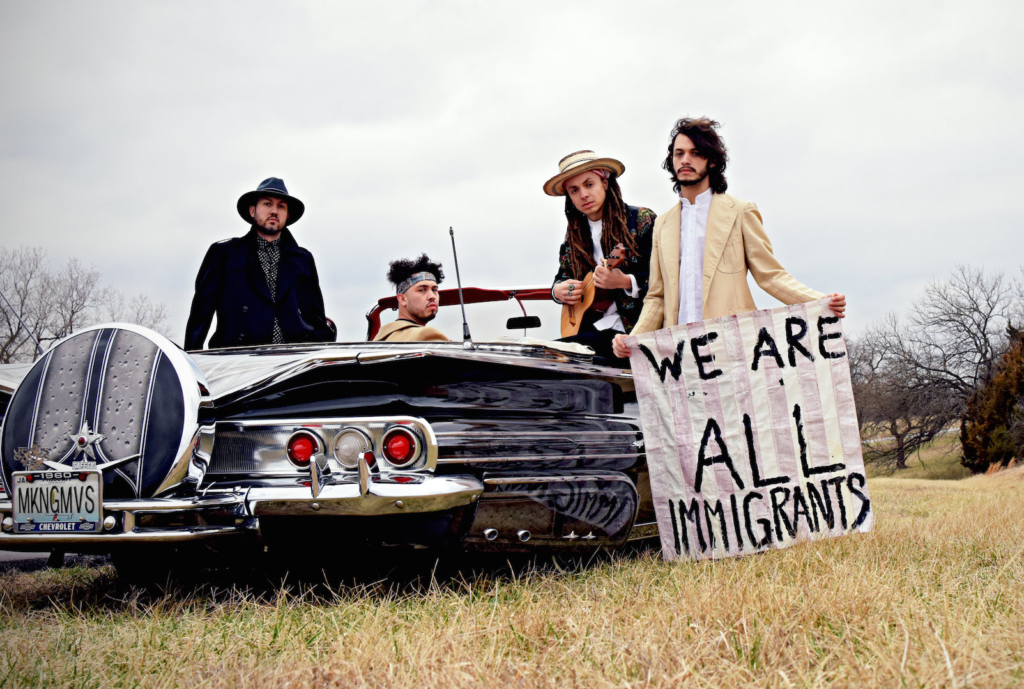 Kansas City’s Making Movies returns with a new album this week. I Am Another You is the quartet’s first full-length since 2013’s A La Deriva and, much like that record, blends genres and styles into something unique, aided by the production of Los Lobos’ Steve Berlin. It’s an intensely danceable, rocking collection, one that tells the stories of three young Latinos in America.

It’s full of guest musicians, but I Am Another You ably uses those players — Hurray for the Riff Raff’s Alynda Lee Segarra, Tennis’ Alaina Moore, and Asdru Sierra of Ozomatli — to complement and enhance Making Movies’ own sound. I spoke by phone with Making Movies’ Enrique Chi, in advance of the band’s record-release show at RecordBar on Friday, May 26.

The Pitch: With every album Making Movies releases, I can’t help but feel how appropriate it is you work with Steve Berlin as a producer.

Enrique Chi: Me, too, man. It’s like a match made in heaven, and it’s really brilliant to work with him. He totally gets the idea — I mean, he’s lived for 38 years in this world, realizing that music is more similar than it is different, you know? Los Lobos often gets placed in this category of being a Latin band, but they have as many Americana influences as they do influences from south of the border. Steve’s worked with as many artists that have nothing to do with Latin music as he has those that do.

I think that his depth of knowledge of all these musical styles — he’s produced a John Lee Hooker record and a Faith No More album — plus touring in Los Lobos for all these years: It’s just too perfect and awesome for me. I don’t know who else would have that kind of perspective for us.

It really shows though on I Am Another You, because you have such interesting and diverse collaborators. How’d you come to include the musicians you chose?

Well, each one was a little bit different. We’ve done some touring with Ozomatli, and we always bring them onstage — like, we’ll bring Asdru and Uli [Bella] onstage to jam with us. When we were in L.A. and songwriting for this record, we just had a four-hour jam session with Asdru, and his vocals and his horn style just work really well with us. That tune, “Verdad,” was already composed to be kind of the grand finale of the album, and I thought that he would know exactly how to make it big. [laughs]

With Hooray for the Riff Raff, we chose them because we found a similar vision in the message, even though the music is different. Although, that’s a little more similar now, because our percussionist, Juan Carlos, plays all over her new album. So we had the song “Brave Enough,” and we felt like it would fit the duality of the narrative of the story. The song’s got this sort of nod to New York Latin music, and we all share a love for that kind of stuff, so we thought it would be perfect.

Plus, our bands are going on the road together in June, so there’s this kind of shared ideology and vision to lift up the voice of Latinos in America — that you don’t necessarily have to be put in a corner, you know? It’s cool that Hurray for the Riff Raff’s music — like Los Lobos’ — exists outside the world of Latin music but still shares so much of that cultural identity. We got on with that idea pretty well.

We also collaborated with a lot of other musicians for strings and adding voice-over stuff, so this album has a bigger cast of characters for us, which had made it rather challenging, but also a lot of fun. It’s a rewarding process.

I’m glad that you mentioned voice-overs, because I’m very curious about the interludes on I Am Another You. What’s the intent behind the interludes?

The concept was born out of this experience of traveling and being around these different little worlds while you’re traveling. We hung out for six weeks in California, and we went to Panama maybe two or three times while we were making this record. We spent a month in Texas. We kind of realized there were three different young people we knew who were going through the hardest shit they’d ever been through. Each in their late 20s, entering into real adulthood — it seems like you kind of half-enter adulthood at 19 to 20, and really enter it at the end of your 20s — they didn’t know each other. The only link was that we knew all of them, and they are each facing different kinds of crises. I started thinking about how similar they all felt, even though these people are from different countries, with completely different experiences and completely different languages.

The way the record is laid out, there’s three songs for each of these three characters. The feeling I had was, although these people’s lives are technically different in their languages and their customs, and even what they’re going through, these are on equal levels of intensity to each individual, and their desperation was the same. So, it’s like, how do I express that with this album? That’s where we came up with the idea for those interludes, and decided to take a risk and go for it.

Making Movies plays RecordBar on Friday, May 26, with Duncan Burnett x Riot. Details on that show are here.