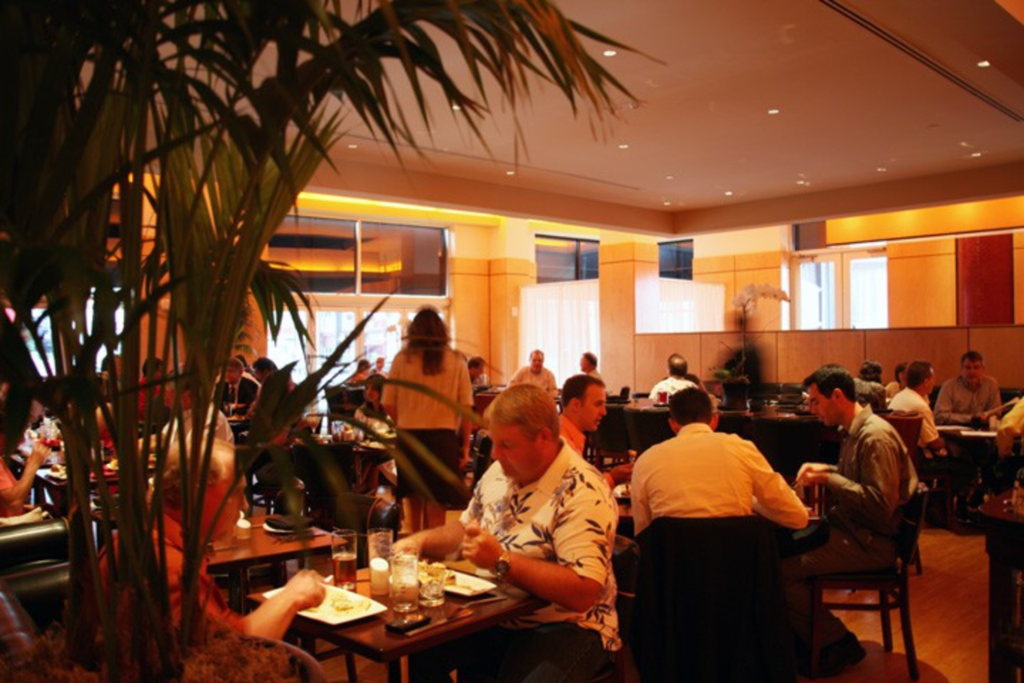 Recently, an African-American friend of mine called in a tizzy because he felt he’d been treated less than graciously at one of the restaurants in the Power & Light District. I had a news flash for him: I’ve endured some seriously uppity attitude from several employees in the same haute bourgeois entertainment district — and I’m a honky.

Just try, I told him, getting one of those young valet parking attendants to park your car at 5:55 p.m. “Sorry,” one of them told me, almost laughing in my face after I pulled in front of Maker’s Mark Bourbon House & Lounge. “I can’t park cars until 6 p.m. It’s policy.”

So I parked the car myself in that dreaded, dimly lighted facility underneath the H&R Block Building. The garage is typically an Alice in Wonderland maze of orange cones blocking access routes and cars veering at you from all angles. Then there’s the Bataan Death March up all those stairs — four flights! I was gasping for oxygen before I reached the Grand Street exit. All this to eat one damn meal?

After climbing even more stairs to reach the hostess desk at Maker’s Mark, my friends and I were welcomed with a withering look from one of the beautiful but frosty fembots who work the seating chart. I smiled half-heartedly at the head hostess, but I could practically see the wheels turning in her pretty little head: “Which horrible table can I take this group to?”

She didn’t get a chance because I suddenly came to my senses and took control of the situation. “We’ll sit here,” I said, standing in front of a four-top. It’s a lesson I’d learned from many years in the restaurant business: Once a hostess starts walking toward the kitchen, the bathroom or the section also known as Siberia, I stop her and make one thing perfectly clear. She’s not in charge of the seating arrangements — I am. If we have to negotiate, I won’t think twice about going somewhere else to eat.

And don’t give me that “one bad apple” theory. A few days later, I returned for Sunday brunch and walked up to the hostess lectern as that shift’s fembot was in the middle of a personal phone call. She kept me standing there for a few minutes and finally lowered the phone to her chin and said, curtly, “Is there something I can help you with?”

Hello? Is that the way that any customer deserves to be treated? White, black or Martian? I flashed my best Joan Crawford glare, and she had that phone down faster than you can say scrambled eggs and bacon. Miss Fembot got real friendly, real fast. And the dining room was nearly empty, so we picked the table.

“Joe Gilbert is turning in his grave,” my friend Bob said, referring to Kansas City’s most legendary and gracious restaurateur of the 20th century.

If there isn’t some attitude adjustment at Maker’s Mark, this extremely pretty dining room — all blond wood and shiny leatherette upholstery — may turn into a morgue. Despite a promising concept, the Sunday brunch was deadly dull. When this restaurant started serving brunch more than a month ago, it was from a limited but appealing menu of seven dishes. I never got to taste any of those original dishes because the brunch soon became a buffet set up in the private-dining Ambassador Room, where a chef makes omelets and thick waffles or slices ham. The pastries were third-rate, the sausage gravy served with the lukewarm biscuits was disturbingly watery and the cupcake-sized salmon croquettes were so dry that I could have used one for a cleaning sponge. And it was expensive!

Maker’s Mark is definitely better during lunch and dinner. I’ve eaten there four times, and on two occasions the service was sublime. The food, however, was never anything special. That’s part of the bigger problem here: Maker’s Mark has delusions of sophistication but can’t live up to its affectations on any level. It’s an attractive place that I really wanted to like, but it’s simply not very likable.

Serviceable, yes. At lunch, there’s a sandwich menu with the standard burgers, chicken and a Carolina-style chopped-pork number with a bourbon barbecue sauce that didn’t live up to my expectations or the server’s glowing recommendation.

The dining room was packed with suits and secretaries on the afternoon when I ate lunch with Franklin and Shelby. After ordering the burger, Shelby pronounced it simply “ordinary.” He was more impressed with the coleslaw — though probably not in a way that Maker’s Mark might have hoped. “It tastes like KFC’s,” Shelby said of the slaw, “and that’s a good thing.” He might, in fact, have detected a trend: Sandwiches come with a choice of steak fries or tater tots — and those tots taste just like the ones at Sonic. Franklin ordered a chop salad, lovingly described on the menu as a gorgeous array of greens, crimini mushrooms, warm bacon, eggs, hearts of palm, blue-cheese crumbles and Maker’s Mark dressing. “How could something that sounded so exciting be so boring?” he whined after it arrived.

Things were better at dinner, once the haughty hostess handed us our thick menus and slinked away. I was dining with Bob and Jennifer, and they admired the spartan beauty of the dining room but were blown away by the raucousness in the bar — on the other side of the room — where a former Cordish chef was holding court at full volume. He wasn’t the only noisy patron yukking it up.

“That’s the problem with this place,” Bob said. “It aspires to be a fine-dining venue, but like everything else in the P&L District, it’s really all about the bar business.”

We started the meal with this restaurant’s onion loaf: a heap of flash-fried, crunchy onion rings baked in a loaf pan and served with the sweet house barbecue sauce. Pretty good, but honestly, an onion ring is an onion ring. More offbeat is the plate of fried chicken breasts and a waffle. This Southern classic gets a pretty decent treatment here, the chicken breasts dipped in a light, tempura-style batter and heaped in a mound of mashed potatoes on top of a thick buttermilk waffle (which was, unfortunately, barely lukewarm). Jennifer ordered that and liked it, though she hoped the fried chicken would be the old-fashioned pan-fried version, like Stroud’s serves.

Bob was impressed by four thick, beautifully seared scallops with a soothing pancetta-vermouth beurre blanc. At our server’s suggestion, I ordered one of the Maker’s Mark steaks, dry-aged for 14 days and not terribly costly, though the side dishes were à la carte. The 14-ounce Kansas City Strip was excellent, really juicy and tender, sided by chive-whipped potatoes that would have been better if they had been hotter.

For dessert, we shared a heaping bowl of freshly made beignets, which were lighter than clouds and dusted with powdered sugar and served with three sauces — dark chocolate, raspberry and a crème anglaise. It was a lovely, Louisiana-style finale for a thoroughly Midwestern meal. It helped that our server that night had been especially polished and the manager, a native of Russia, accommodating and sweet.

“Why can’t everyone working here be so nice?” Bob wondered.

If this place really wants to make its mark, someone needs to think about that.