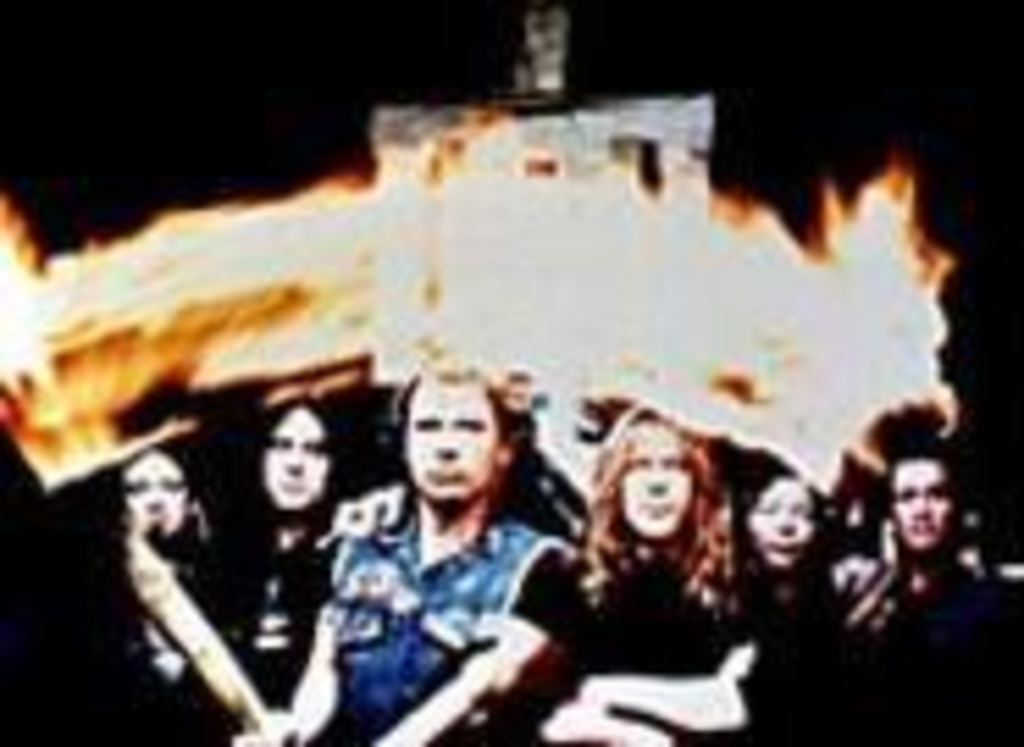 The term “heavy metal” has been bandied about for the past quarter-century. Too often, various and sundry rock bands have been handed the title, once reserved for the truly heavy, when they simply don’t deserve it. In fact, very few rock and roll groups actually deserve this label. However, the London-based quintet Iron Maiden not only exemplifies the term but also helped to pioneer it, with nearly two decades of uncompromising guitar-driven rock to its credit, and the group does its best to keep the beast alive, with a vital new album and a massive tour.

“We got our major-label-backed debut back in the early ’80s,” recalls guitarist Dave Murray, referring to the group’s classic self-titled 1981 debut and its even more intense follow-up, Killers, both of which featured original singer Paul Di’anno. “Since then, we’ve had a bit of success,” he deadpans in his prim and proper English accent. “Supposedly we’ve sold something over 50 million records, but to be honest, I really haven’t been counting them all.”

What Murray and his bandmates can count on is the support of hundreds of thousands of fans worldwide. Yet with all the band’s various successes, Iron Maiden keeps a low media profile. It’s not as if the band, which reunited its golden-years lineup by inviting guitarist Adrian Smith and singer Bruce Dickinson back into the fold, has avoided the limelight. But for some reason, Iron Maiden doesn’t make many appearances on television and/or radio. It’s as if Iron Maiden has flown under the fame radar to reach its multiplatinum success.

“Despite all the records sold and fabulous tours, Iron Maiden isn’t really even famous,” Murray says. “We have amazing fans, and they seem to follow our every move, but beyond them, we are practically anonymous. We’ve all been given an exceptionally nice living playing music that we love without having to sell our souls to the media to get there. Sometimes I don’t know if fortune without fame is a blessing or a curse, but honestly I don’t think I could have asked for anything nicer than to still be doing what I’m doing after all these years with as many loyal fans still ready to come out one more time, so I’ll count it as a blessing and not worry so much about being played on MTV or the radio. Iron Maiden is an acquired taste; not everybody is going to love it. C’est la vie.”

While fame is fleeting and fickle, Iron Maiden’s “acquired taste” continues to spread, with the group selling out shows throughout Europe and America before returning to the studio to churn out the well-received Brave New World. Produced by Kevin Shirley (Aerosmith, The Black Crowes, Silverchair), it’s the band’s 12th studio album, and Murray says it was one of the easiest Iron Maiden albums to make.

“I’m really happy with the new record,” he beams. “After the tour happened, it just seemed natural for us to shuffle back into the studio for another helping. It all sort of fell together without a lot of frustration or roadblocks. We came up with an album’s worth of material that I think will surprise a lot of people. It’s classic Maiden with several unexpected twists. We came out with probably one of the finest albums we’ve ever done, and we are back out on the road to prove it to anybody willing to come out and see it for themselves.”

The latest tour pairs the band with two other monsters of metal past and present: Former Judas Priest frontman Rob Halford (now in a new group called simply Halford) and Queensryche. Together, the three bands are scheduled to tour North America for the better part of this year, and possibly beyond.

“We just started this tour a couple of nights ago in Toronto,” Murray says. “The first couple of nights up here in Canada have been great. Both Queensryche and Halford have been incredible, and I think Iron Maiden is sounding perhaps the best we’ve ever sounded. I honestly think that this tour is what heavy metal music is supposed to be about. There are very little gimmicks, few tricks, just some hard and heavy rock music. I think some of the newer bands have failed to realize that and are trying to put on some sort of musical production number. Heavy metal should not be a Broadway musical production.”

But what about Iron Maiden’s own traditional visual element? It’s not as if Iron Maiden hasn’t unleashed some of its own over-the-top productions in the past. From dungeons and dragons to Egyptian spacecrafts and World War Two fighter pilots, Iron Maiden has always delivered great imagery. And what about poor Eddie, the band’s rotting-corpse mascot who often appeared at concerts as a 30-foot-tall behemoth?

“Oh, Eddie is still around, and he’s looking after the band as always,” Murray says with a laugh. “I don’t think we could call ourselves Iron Maiden without good old Eddie appearing somewhere in the mix. But I think as we’ve aged, all the flash and gimmickry has sort of become less important to us. I think over the last few years we’ve gone one way while most of the newer metal bands, like Slipknot, have taken it in the opposite direction. Whatever the case, Iron Maiden will have some stuff happening on stage, but I think it helps the music and doesn’t become the show despite the music. That’s a big difference, really.”

The fans seem to agree, as Iron Maiden continues to fill arenas and amphitheaters wherever it goes. “I can look out into the audience every night and see teenagers and people old enough to be their parents out there having a great time,” Murray says. “That’s all that really matters to me. If you come to see an Iron Maiden show, you’ll have a really good time. And in the end, that’s what it’s all about.”