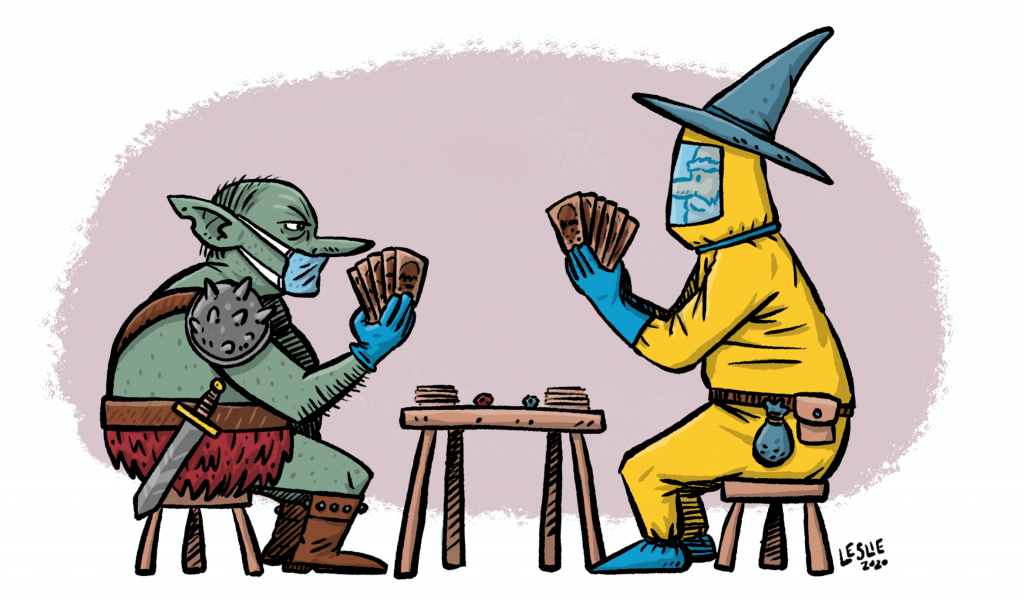 Magic in a time that lacks magic. // Illustration by Lee Leslie

There was a time when certain children’s games were considered to be instruments of the actual Devil by conservative religious sects. The so-called “Satanic Panic” targeted not only purported occult items like Ouija Boards and Tarot Cards, but also nerdy role-playing games like Dungeons & Dragons. In retrospect it’s hard to know what to be more incredulous about — the idea that Ouija Boards and Tarot Cards were effective ways of channeling Lucifer, or that a bunch of kids playing D&D were channeling anything more nefarious than JRR Tolkein.

These things were all completely forbidden in my house. In fact, my grandmother told me her hall closet was haunted because that’s where the people who lived in the house before her kept their Ouija board. An interesting artifact of this time is Christian musician Carman’s 1989 song ‘The Witch’s Invitation,’ which features the following lyric, “His house was filled with every occultic symbol you could fathom; Hanging pentagrams and horoscope signs, a Ouija board and dungeons and dragons game set on the table, a crystal ball with an incandescent shine.”

In the mid ‘90s, a dangerous new game swept through my junior high school — Magic: the Gathering. The game featured fantastical characters and elements with corresponding numerical strengths and weaknesses similar to ‘D&D’, but on lusciously illustrated collectible cards. As a bookish child with a love for fantasy, I was captivated the moment I saw the enchanted landscapes, mysterious sorcerers, and terrifying monsters populating the cards. My love, however, remained unrequited, as a few of the first magic cards prominently featured pentagrams in the character art. So while all my friends played at the lunch table every day, I would flip through their cards longingly. Entranced by the thought that these small cardboard rectangles could somehow contain so much, well, magic.

Like most things my friend and I were into at the time — Magic cards, comic books, The Offspring — we got older and preoccupied. Although I would never quite stop reading comics, or secretly loving “The Kids Aren’t Alright (Shattered Dreams),” I hadn’t really thought much about the game until I wandered into a local game shop with some tweens of my own a few weeks ago. Their friends had recently started playing, and my kids jumped at the chance to get free introductory decks of cards from the nice lady behind the counter. As they picked out their decks (fire for my son and water for my daughter) an amazing thing happened when the lady handed a deck to me — I was suddenly flushed with memories of my junior high lunch room, the crushing sense of omniscient guilt that comes with a strict religious upbringing, and an overwhelming gratitude that my kids won’t know that guilt. It’s easy to be cynical. I know they’ll get all new neuroses from me, but so much of parenting is claiming little victories when you can.

The introductory decks are definitely a “the first hit is free” situation, but the game could not have come back into my life at a better time. We went back to the game store to pick up new cards just before society ground to a halt amidst fears of the global coronavirus pandemic, and anyone who has played Magic: the Gathering can tell you — there isn’t a better game to be quarantined with. The basics of the game are fairly simple, but many cards have complicated individual rules that can be combined with complementary cards to exponentially boost their effectiveness. With thousands of cards produced over the last 20 years, these combinations are essentially infinite.

I think what my kids love the most about the game is the ways it allows them to express their individual personalities. My son has spent hours with his cards spread out on the floor — reading the intricate rules for specific cards and filling his deck with as many dragons as possible. Meanwhile, my daughter who delights in being a contrarian, has filled her deck with cards that basically undo whatever spell or creature her opponent has just cast onto the battlefield. The game’s popularity in our house can also be attributed to its unpredictable nature. Unlike chess, the best player doesn’t always win. I don’t mean to brag, but I’m about 30 years smarter than my son, who just completely destroyed me in a game because my hand was full of swamps. Not particularly useful against an army of fire-breathing dragons.

Even if we run out of canned vegetables and toilet paper we’ll still be tapping manna to cast enchantments and creatures, and no offense to all the nerds I used to eat lunch with in junior high, but the people I’m playing with now are much better companions.