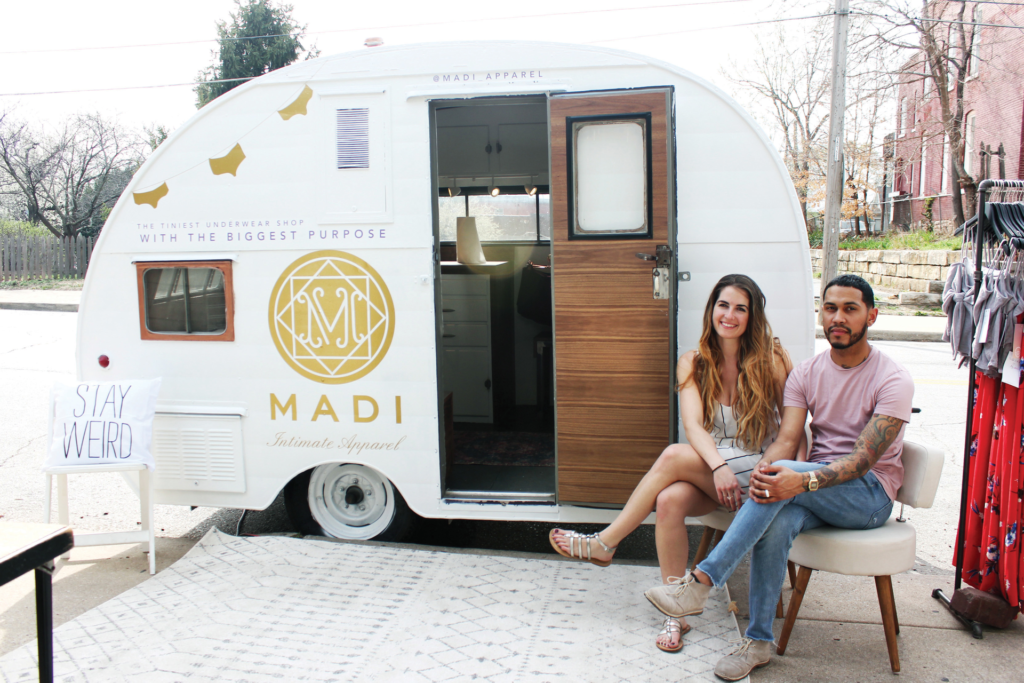 For pretty understandable reasons, most shelters won’t accept used underwear as a donated item. You can buy new underwear and donate it, but not a lot of people do that. As a result, women’s underwear is one of the under-donated items of clothing there is.

In 2013, Hayley Besheer Santell founded MADI Apparel, a line of eco-friendly underwear, sleepwear, robes, and bralettes with a buy one, donate one model. With each purchase of any garment from MADI, a pair of MADI underwear is donated to women in need at domestic violence shelters, homeless shelters, rape crisis centers, and disaster relief efforts. MADI has partnered with 14 local organizations — including MOCSA, Hope House, and Journey to New Life (helping women who recently left prison) — and 30 global organizations. So far, over 4,600 pairs of underwear have been donated.

In an effort to reach more women — both customers as well as those who benefit from donations — Besheer Santell and her husband recently modified a camper to take MADI on the road.

“Any time we travel in person for a drop off, we set up a table and make it like a real boutique,” Besheer Santell says. “That way they can pick out a pair and choose their own color and we can talk to them about the fabrics and how to wear them. It really creates a dignity factor.” 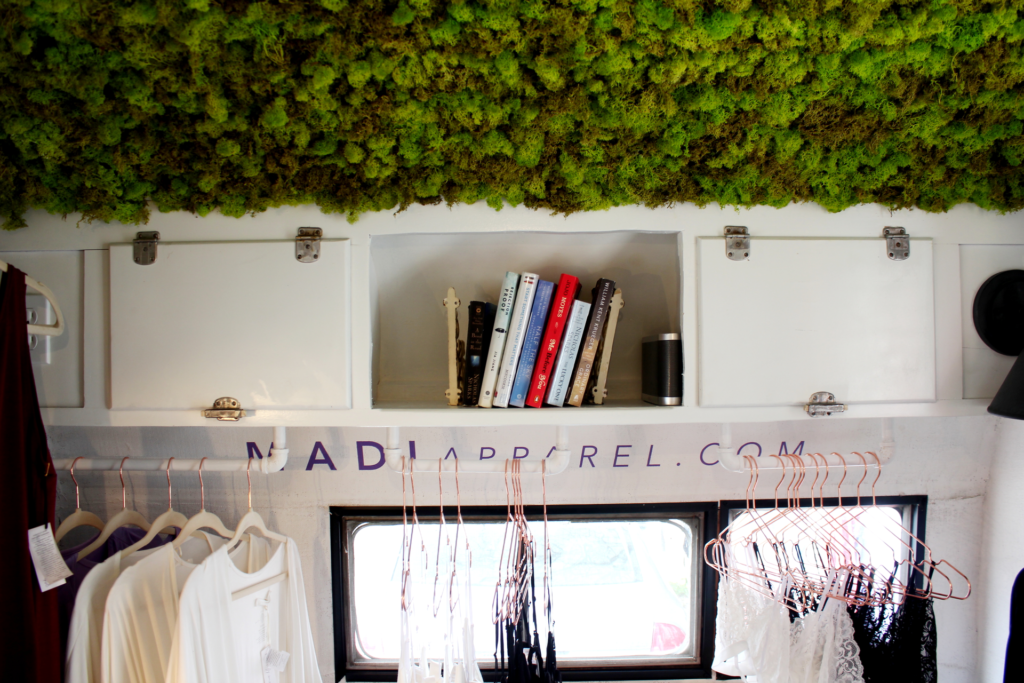 When we talked to Besheer Santell in 2015, MADI had just opened its first storefront, after a few years of online-only sales. At the time, they had only six designs of all-black underwear. Today, the line is a range of sleepwear and lounge items in a selection of colors, all made from long-lasting lace and bamboo viscose fabric that is self-wicking, quick drying, and extremely soft. Women receiving donated pairs get the same treatment; MADI underwear sold is the same as what is donated (minus the thong design).

Currently, all MADI products are made locally by women-owned sew teams. But as MADI’s business has grown, the need for more seamstresses has, too. So MADI recently teamed up with Hope Faith Ministries, a homelessness outreach facility. Together they’ve launched a new program called MADI Makes that trains previously homeless women to sew MADI underwear at Hope Faith’s onsite sewing center.

“As our volume increases, our local cut-and-sew producers are kind of at capacity, yet they want to hire more people, and so the motivation behind that is to employ local people, train local women [with] a job skill for their whole entire life, and to fight cycles of homelessness,” Besheer Santell says.

Alfredo Palacol, Development Coordinator at Hope Faith Ministries, sees MADI Makes as a way to further improve the future for many of the at-risk women who come through their doors. Hope Faith identified women in its sewing center who showed an interest in apparel manufacturing.

“We know that once we elevate individuals to that place where they can be self-sufficient and independent, they can get to that point where they’re self advocating and making the decisions that are right for them,” Palacol says.

A recent fundraiser helped MADI procure an industrial sewing machine to add to the Hope Faith sewing center. Miranda Treas, an independent manufacturer who has been sewing for MADI the past four years, will begin training MADI’s first new seamstress, Andreshia, at the end of this month.

“With my business, it’s crazy, I have to turn away so many people,” Treas says. “There’s just so much sewing need in Kansas City, and there really aren’t places available that can make goods for even the small guys.” 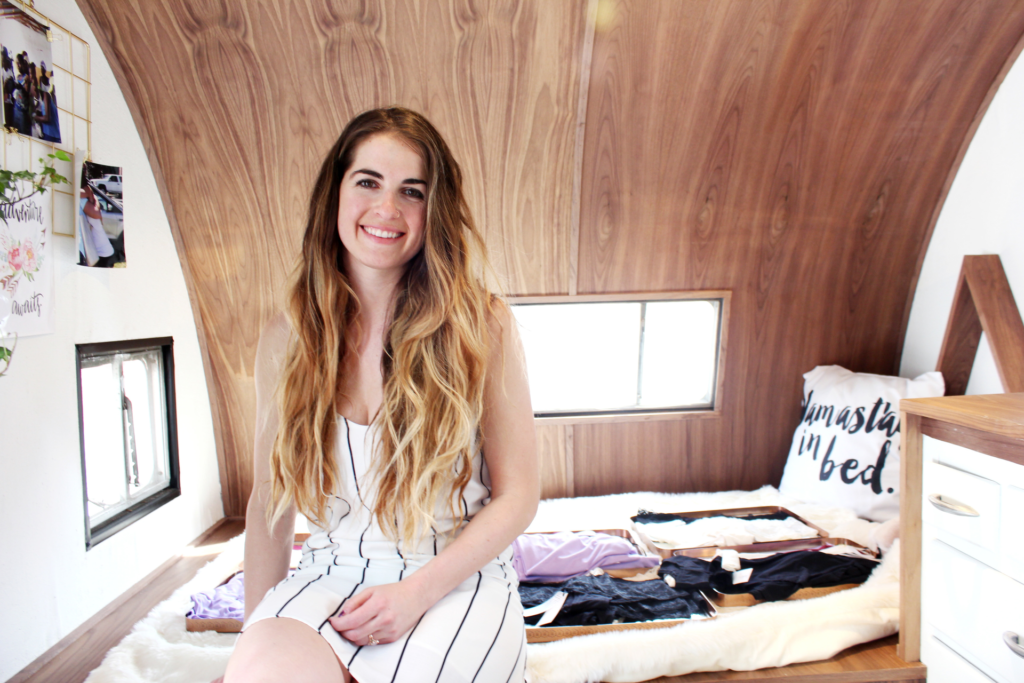 After her training, Andreshia will be working part-time for MADI out of Hope Faith Ministries. The goal is to eventually train and employ three seamstresses.

“We didn’t think we’d so quickly be able to train at-risk women,” Besheer Santell says. “So now it’s like a full circle: we’re training women to sew the pairs of underwear to donate back to women [whose situation] they were once in.”

The MADI camper will be making appearances in the Crossroads on First Fridays, in the West Bottoms during first weekends, and during Chick Events in April and June.