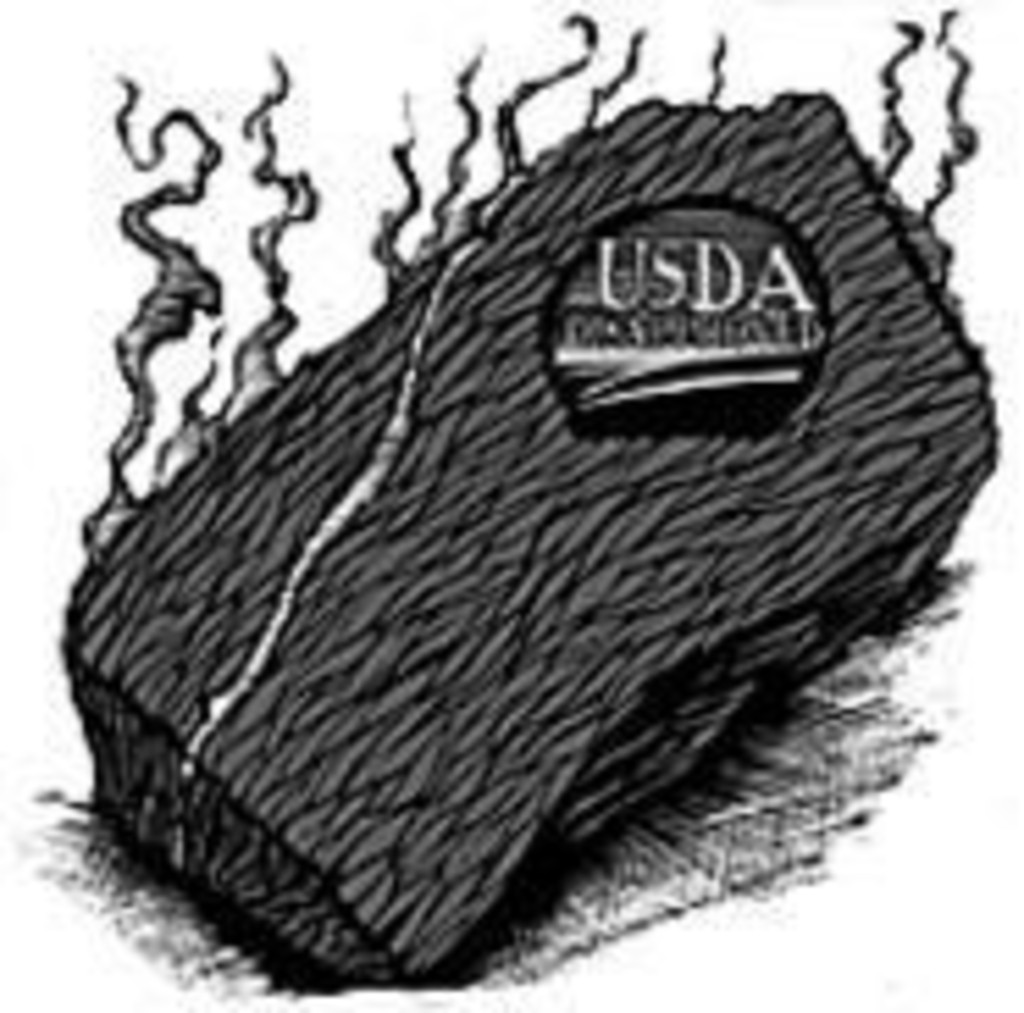 In Arkansas City, Kansas, a tiny town south of Wichita, about 750 workers arrive each day at Creekstone Farms, a meatpacking plant built four years ago. Each day, they process nearly 1,000 cows from the company’s pastures in Kentucky, turning out not only thick, premium black angus steaks that will be served at upscale restaurants but also beef that will be sold roasted and sliced in Wal-Mart delis. But in the past three months, the workers’ hours have been cut, and they’re worried about their jobs.

After a cow tested positive for bovine spongiform encephalopathy — mad cow disease — in Washington state in December, many countries banned imports of U.S. beef. Since then, Creekstone has been losing about $80,000 a day, Kevin Pentz, the company’s vice president of operations, tells the Pitch. Creekstone had been exporting a quarter of its meat to Japan, but now the plant has cut production to four days a week, Pentz says.

Japan agreed to start importing Creekstone’s beef again if the plant complied with Japanese standards by testing all of its cows. So a few weeks ago, Creekstone officials announced that the company would be the first beef producer in the United States to test all of its cows for mad cow disease. But instead of drawing praise from government regulators, Creekstone’s seemingly safety-conscious decision has angered major players in the meat industry. Moreover, the United States Department of Agriculture may turn to a ninety-year-old law to halt Creekstone’s plans.

In the year leading up to the discovery of mad cow disease in Washington, United States meatpackers tested only 20,000 cows. On March 16, after listening to recommendations from a panel of international scientific experts who said there was a high probability of more mad cow cases in the United States, U.S. Agriculture Secretary Ann Veneman announced that, starting in June, the department would add $70 million to its budget so it could test at least 220,000 cows a year.

But Creekstone wasn’t waiting around. A month earlier, the company had petitioned the USDA to approve a rapid test using reliable technology that can return results in just a few hours. The test kits were already being produced by American companies for foreign markets, and the USDA had announced in January that it would begin licensing the tests — but warned that the approval process could take up to a year.

In response, Creekstone started negotiating with several private U.S. laboratories that have developed rapid testing. The company had also begun building a laboratory in its factory.

Frustrated with the USDA’s delays, Creekstone had enlisted the help of U.S. Rep. Todd Tiahrt, Pentz tells the Pitch. But according to Tiahrt’s staff, even the congressman has received no answers. “At this point, we’re still trying to get from the USDA a simple answer to Creekstone’s request,” says Chuck Knapp, Tiahrt’s spokesman. Knapp says Tiahrt’s staff checks in with the USDA about every other day. “The congressman believes that if a private company wants to test, they should be able to.”

In the story, Lisa Ferguson, a USDA senior staff veterinarian, hinted that Creekstone would be committing a crime if it tested cows without the agency’s approval. She referred to the 1913 Virus Serum Toxin Act, which mandates that the USDA’s Animal and Plant Health Inspection Service license all animal diagnostic test kits and calls for a $1,000 fine and up to a year in jail for violators. “If Creekstone goes forward, there would likely be a legal battle, including criminal charges,” Meatingplace.com predicted.

Then, in mid-March, the American Meat Institute, an industry trade group, denounced Creekstone’s plans. That organization’s spokesman, Dan Murphy, told The New York Times that Creekstone’s solution was “not the right one.” A few days later, Creekstone President John Stewart, a thirty-year beef industry veteran whose opinion apparently carries some weight with other cattlemen, reportedly told AMI President J. Patrick Boyle he was displeased by Murphy’s statements. Soon after, Meatingplace.com reported that the AMI had fired Murphy.

American Meat Institute spokeswoman Janet Riley won’t comment on the Creekstone controversy. But she provided the Pitch with a brief statement from Boyle. “Testing all animals will not make beef safer,” Boyle said, suggesting that the USDA’s current system of testing is adequate. “Testing all animals is unnecessary for both animal disease surveillance and food safety purposes.”

A spokesman for the USDA’s inspection service, Jim Rogers, tells the Pitch that the agency will not comment on Creekstone’s request beyond a statement released by J.B. Penn, the undersecretary for Farm and Foreign Agricultural Services. “We are evaluating the implications of this proposal, including legal, regulatory, trade and other considerations,” Penn said. “Be assured that resuming trade with Japan is one of the USDA’s top objectives, but we must treat this matter very responsibly.”

But officials in Japan — until the ban, the largest foreign buyer of U.S. beef — have said that their own experience with mad cow disease shows that it’s necessary to test all cattle. Since it began testing all of its cows in 2001, Japan has found eleven cows infected with mad cow disease. And as the USDA discovered in Washington state, just one sick cow can contaminate tons of beef. That’s because beef-processing plants create ground beef in giant vats, grinding and mixing muscle tissue and scraps from dozens of cows. The lone sick cow in Washington caused the USDA to recall about 40,000 pounds of meat — but the agency got back only half that amount and doesn’t know how much consumers ate.

In an effort to help convince Japan to reopen its borders to untested U.S. beef, Kansas Livestock Association representatives, accompanied by Senator Sam Brownback, led a small group of Japanese agriculture experts, including Kansas City-based Consul General Takao Shibata, on a tour of a Kansas feedlot and slaughterhouse in late February. Scarlett Hagins of the Livestock Association tells the Pitch it wouldn’t be feasible for Kansas meat producers to test all their cows, as Japan does. “I suppose we could if we had to,” she says. “But we have very strict regulations in place that keep us from needing to test every one of them.”

For years, Public Citizen has maintained that the USDA’s mad cow disease surveillance system, which allowed beef producers to submit samples for testing voluntarily, is inadequate and poorly run. A 2001 study by Public Citizen found that voluntary mad cow testing varied widely among the top twenty cattle-producing states. Kansas is the nation’s second-largest cattle-producing state (Texas is No. 1), but it tests the fewest cows — only half a cow for every million slaughtered. “To completely eliminate BSE risk would require the testing of all cattle (or at least those over 20-30 months),” wrote Peter Lurie, deputy director of Public Citizen’s Health Research Group, in an open letter to Veneman on Public Citizen’s Web site in February.

“Everything that has come out since the diagnosis of the mad cow case in Washington state has indicated that the USDA’s testing program remains in disarray,” Lurie tells the Pitch. “It is far from systematic and doesn’t inspire confidence.” Soon after the mad cow discovery, the owner of Vern’s Moses Lake Meats, where the sick cow had been headed to slaughter, told reporters that the USDA had inexplicably ordered the plant to halt all mad cow testing. Then, in early March, the U.S. government launched a criminal investigation to determine whether USDA officials had falsified records relating to the sick cow.

Creekstone’s Pentz says that the company believes the U.S. beef supply is safe, but it’s willing to do whatever it takes to win back Asian markets and cut its economic losses.

And regardless of its motives, Creekstone’s willingness to test all cows could be a positive move for public health if it forces other companies to do the same in order to stay competitive.

In mid-March, the USDA finally approved rapid mad cow test kits from U.S. company Bio-Rad Laboratories. But Creekstone is still waiting for the USDA to allow the company to begin testing its own cows.

On March 19, Meatingplace.com reported that sources close to negotiations between the USDA and some private companies that want to test all their cows revealed that the agency may soon announce a proposal that would allow the testing with USDA supervision. The industry Web site attributed the agency’s possible reversal to political pressure.

“We don’t know how long it will be, but we’re having a lot of conference calls with the USDA,” Pentz says.