Macbeth glows in the park 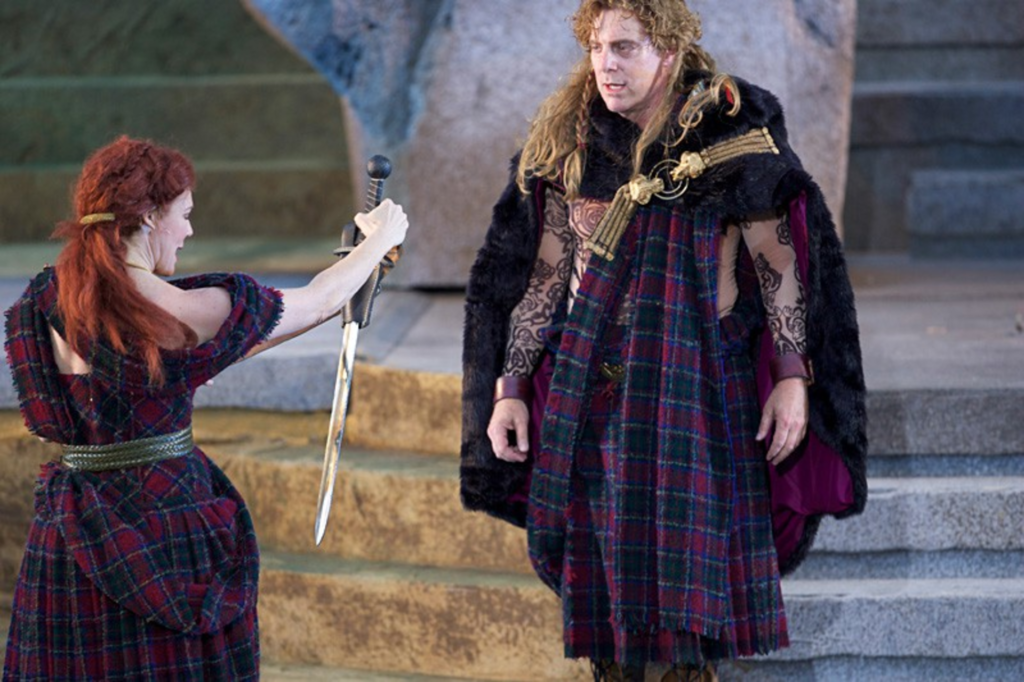 You’re living your everyday, nobody life, resigned and unsatisfied in equal measure. Nothing is close to the way you dreamed it would be, but mostly things are OK. Mostly.

Then you get an unexpected second shot at greatness, at the higher things you were meant to do. Someone recognizes the gift in you, your true nobility, your capacity for glory, and gives you permission to go for it.

That’s the story of Macbeth, as portrayed by John Rensenhouse at the Heart of America Shakespeare Festival in Southmoreland Park.

My expectations were low going in — extremely low. This typically is not the usual free park production, but the show came very close to not happening this year for lack of funds. I arrived braced for cardboard scenery, thrift-store costumes and apologetic performances before an inattentive audience. What I saw instead was first-class acting in a psychologically acute and technically outstanding production.

Let’s start with James T. Lane Jr.’s set, a Stonehengey rockscape that evokes a craggy, druidic Scotland. I drove past the stage on Sunday, and the set looked good even under the noon sun. In twilight, bathed in Ward
Everhart’s dramatic lighting and shrouded in fog, it positively glowers. As for Mary Traylor’s costume designs, Macbeth: Men in Kilts totally works for me. I love the Braveheart flying tartans. Ditto the wild, unkempt wigs and tribal tattoos, which seem to place this production back in the Beowulf era. Rusty Wandall’s perfect sound design and Greg Mackender’s atmospheric music, combined with the lighting, create an intimate theatrical space in the vast outdoor setting.

Rensenhouse rules that arena with his passionate account of a modest, loyal, hard-battling thane who finds himself seized in midlife with ambition for more. He uses his powerful build to render a physically dominating performance but, at every moment, he also delivers insight into Macbeth’s inner turmoil. We understand exactly why he does what he does, no matter how heinous.

Macbeth and Lady Macbeth are really the only fully formed characters in the play, but they are well-supported by some of Kansas City’s best male actors — other than Lady Macbeth and the witches, this is nearly an all-male play — most of whom excel at making even the most tripping of Shakespeare’s dialogue easily intelligible. Their smartly conversational line readings sing the music and wisdom of Shakespeare’s iambic pentameter while delivering accessible entertainment, even for children.

Bruce Roach is especially good as Banquo, along with a strong Mark Robbins as Duncan, Matt Rapport as Lennox and David Fritts as Macduff. Jay Akin stands out here even in small roles, especially in his comic moment as the Porter. (I didn’t think much of Akin in last fall’s Hot l Baltimore at Metropolitan Ensemble Theatre, but he has proved me wrong every time I’ve seen him since.)

Producing Artistic Director Sidonie Garrett keeps the action speedy at just over two hours, a pace that never lets attention flag. (Some productions go past the 150-minute mark.) This is no brooding Hamlet. Macbeth is true-crime action, with all-out battle scenes and an ever-growing list of rivals to kill off. The trooping on and off the stage that this requires is handled with creativity and dispatch, but it also leaves a lot of stiff bodies up there sometimes. It seems like a number of tertiary players were told not to move a muscle unless delivering a speech. Even when entering and exiting the stage en masse, actors should play characters — with individual body language and rhythms — rather than just taking up space.

Another grumble: The text of Macbeth is so marbled with gender motifs and complicated ideas of manliness and womanliness, one is practically tempted to drop everything and write a dissertation. So it’s disappointing that the relationship between the king and his lady, one of the richest, strangest love stories in theater, is reduced to ridiculous pawing and humping. It’s that cheap movie trick of conflating bloodlust with lust, and the Bard deserves better. As Lady Macbeth, Kim Martin-Cotten has charisma and dramatic power to spare, especially in the scene that calls for her to do what her husband cannot: Re-enter the death chamber to finish off the witnesses. She also succeeds in making the sleepwalking scene a moment of true psychological anguish rather than the grandstanding monologue it often is. Unfortunately, the decision to portray her as dangerous seductress misplaces Martin-Cotten’s considerable talents.

Macbeth suffers from the same flaw as Garrett’s recent direction of In the Next Room (or the Vibrator Play) at the Unicorn Theatre: While both productions are well-done, smart and enjoyable, both pull back from the full highs and lows. Here, a moment of true tenderness might help us better understand the tie that binds Macbeth and Lady Macbeth and drives them to their bloody deeds. At the other end of the scale, the drama’s emotional climaxes — the announcement of the slaughter of Macduff’s wife and children (“all my pretty ones”) and its larger echo, the announcement of Lady Macbeth’s death by her own hand — are not as soul-shattering as they might be. Still, you walk out of this gripping production older and wiser, ears ringing with poetry.