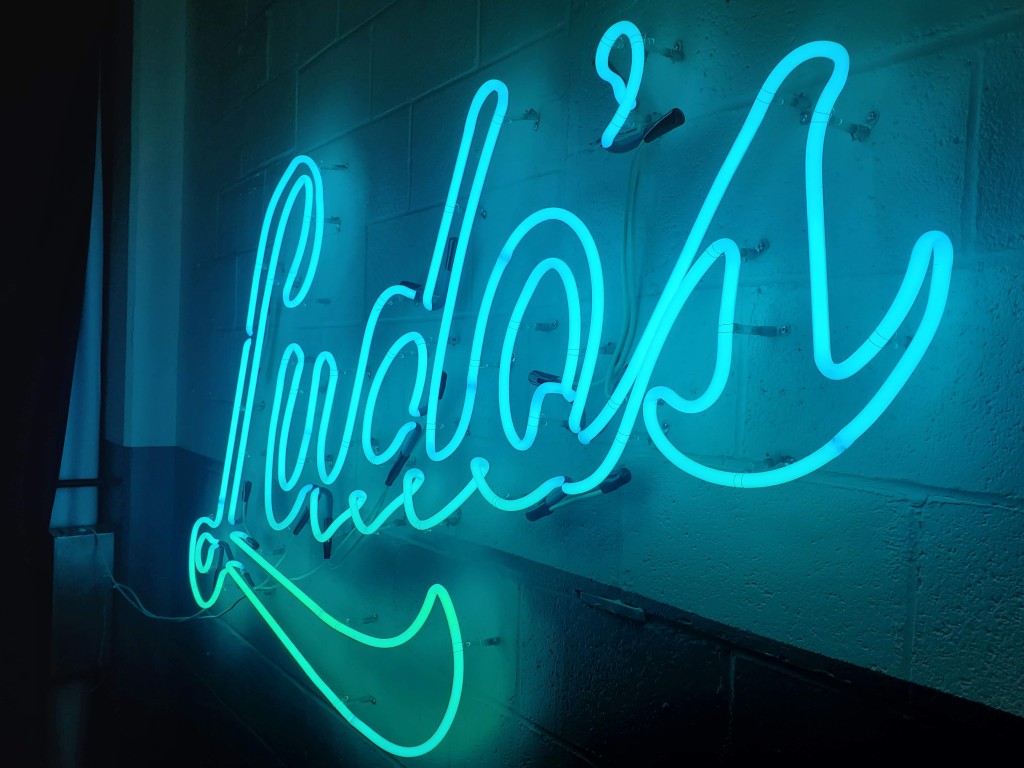 Full-sized shuffleboard is an underrepresented bar game. You can find any number of spots around Kansas City with shuffleboard tables, but finding a place with the space and set up for multiple courts is a rarity.

Ludo’s Shuffleboard Bar, which recently opened in Martini Corner, is here to scratch that sandy itch. In addition to their three shuffleboard courts, Ludo’s offers a variety of beers, wines, and unpretentious cocktails—aiming to be a perfect post-workday hangout.

Kace Harding serves as the General Manager of Ludo’s as well as Bar Director for Made in Kansas City, the team behind this concept. She’s the driving force behind the vibe and cocktail menu and has quickly become Ludo’s shuffleboard guru. “I sort of just dove into it,” she says. “I learned a bunch of rules and strategies, and I was surprised with just how much I got into the game.”

She didn’t do it alone. Harding rummages behind the bar and produces a surprisingly in-depth booklet called Shuffleboard Strategy by Glen Peltier. A bit of cursory research indicates that Peltier is a Hall of Famer in the shuffleboard world. Thumbing through his booklet is overwhelming to a newbie, but Harding offers a crash course.

Shuffleboard is played either one-on-one or with two teams of two. Players alternate using a two-pronged stick (called a tang) to push weighted discs (called biscuits) down the court towards the scoring area at the other end. Any biscuit that is completely in a given zone (if even a bit is over a line, it doesn’t count) when the round is over scores the number of points listed. The first to 75 points wins. 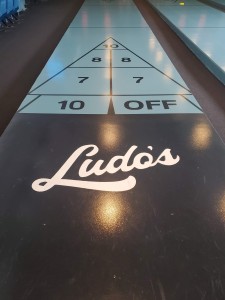 The board. // Photo by Jordan Baranowski

Of course, there’s a lot more strategy involved in the game than just pushing the biscuit down the court.

“I think I got drawn in because of how satisfying every element of shuffleboard is,” Harding says. “A perfect shot to set up a blocker for your high-scoring round, the tense moment waiting for your opponent’s last biscuit of a round, and—the best one—knocking their cleverly placed shot into the kitchen.”

The kitchen is the zone at the far end of the court. Any biscuit that ends up there loses ten points for their team. Talk about a devastating turnaround.

There’s a lot more to Ludo’s than just laughing at your opponents’ misfortune, though. The vibe is pure throwback, with nods everywhere to a ’70s sports bar. Bright neon signs, shag carpet rugs, era-appropriate pinball machines—Ludo’s feels a bit like a period TV show in all the best ways.

That atmosphere also finds its way into the cocktail menu. Harding’s approach to the drink menu at Ludo’s was to take the classics, upscale the ingredients, and add a nice, kitschy twist. Sticking true to their Made in KC roots, Ludo’s also primarily uses local spirits where they can.

The Pep Rally is Ludo’s take on a margarita. It’s well balanced, and the allspice dram adds an unexpected and welcomed hit of spice. Rimmed with the chili-lime goodness of Tajín, it’s something you won’t regret ordering.

The Biscuit Slinger is an easily-crushable riff on the Singapore Sling with a strong, herbal flavor that’s complemented by tart cherry, berry, and citrus accents. The Midtown Swizzle pulls in lots of Tiki influence with a sharp, sweet flavor that does tames the large amount of booze you’re consuming.

There are a few frozen cocktails available as well some wines and a rotating selection of beers. Select bar snacks are offered, but they allow guests bring in outside food. They’re also working on a food truck schedule, but that currently sits on the nebulous “coming soon” timeline.

Currently, Ludo’s allows you to reserve a shuffleboard lane on their website. Generally, it’s $10 per hour, unless it’s 6-9 p.m. on Friday or Saturday. Those are considered “peak hours,” and the price to play goes up to $20 per hour. You’re also welcome to try your luck at playing without a reservation—the prices are the same, but open lanes without a reservation are fair game to anyone hanging out. League nights and tournaments are also in the works, with more details to come soon.

Ludo’s love of shuffleboard is infectious. It’s impossible to not get invested in the cheers and groans of players on the courts, and the satisfying sound of collisions is exciting background noise while you’re sitting at the bar.

Bring your A-game with you to Martini Corner, and may your biscuits always stay out of the kitchen.