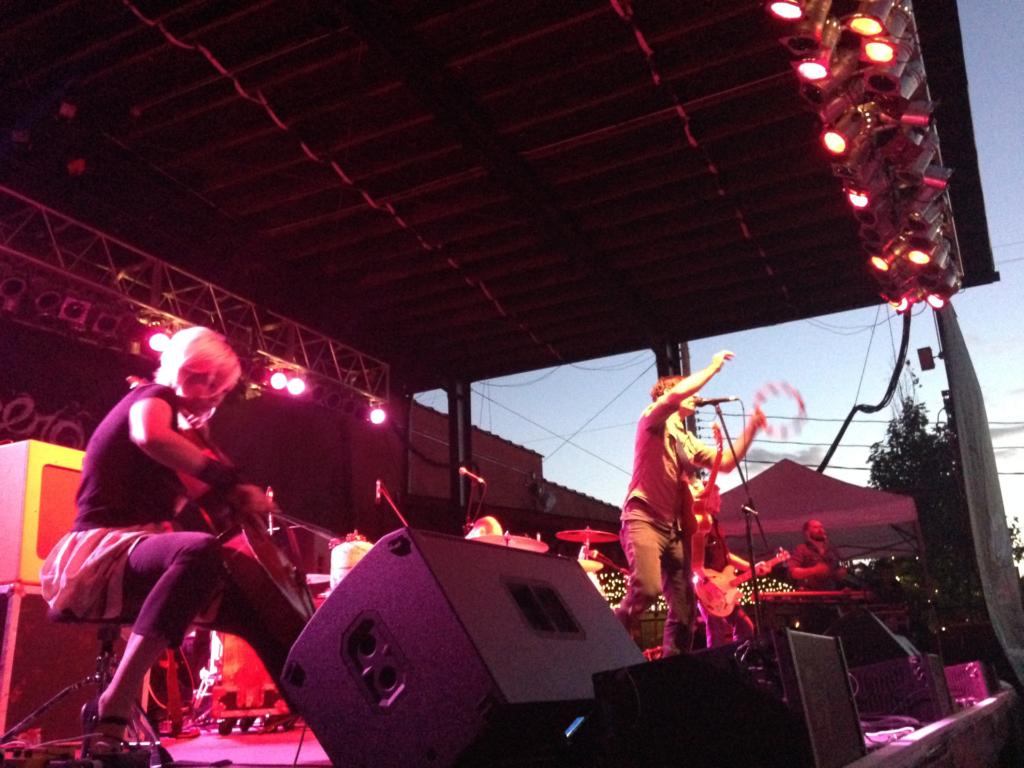 Murder by Death and Lucero were reunited on the same bill at Crossroads KC last night, after years of not playing together. Murder by Death jumped right into things, starting with “Kentucky Bourbon.” Band members barely said a word between songs, though they did make an exception for a Lucero shout-out: “We used to tour with Lucero a lot,” lead singer, keyboardist and guitarist Adam Turla told the crowd. “It’s been nice seeing them again.”

Murder by Death has been riding the wave of dark western for years. Its sound is a haunting one – more Children of the Corn than back-porch Americana, but graceful and wistful at the same time. Cellist Sarah Balliet’s orchestral elements brought some sentimentality to songs that might otherwise drop heavily as morbid tunes. Keyboardist Scott Brackett would often switch things up for a mandolin or trumpet riff, driving tracks “The Curse of Elkhart” to thrilling – and slightly creepy – heights. Turla’s voice was so eerie and enchanting, you either fell in love with him or avoided his eyes for fear of his casting a curse.

Later in its set, MBD played “Brother” and closed out with “Coming Home.” The crowd enthusiastically received these tunes with fist-pumps and lots of jumping, and MBD passed the hat to Lucero just before 10 p.m.

Memphis-based Lucero was a booze-loosened bunch, much like the crowd at that point. “It’s just apple juice,” lead singer and guitarist Ben Nichols said with a wry smile, chugging a red cup of what could only have been whiskey and strumming his guitar. The band played a two-hour set, opening with “The Devil and Maggie Chascarillo,” and playing some of Nichols’ solo songs like “The Last Pale Light in the West.” Drunken banter would prove popular.

“Y’all been drinking right?” Nichols said as the crowd howled. “There’s a reason we like Kansas City!” 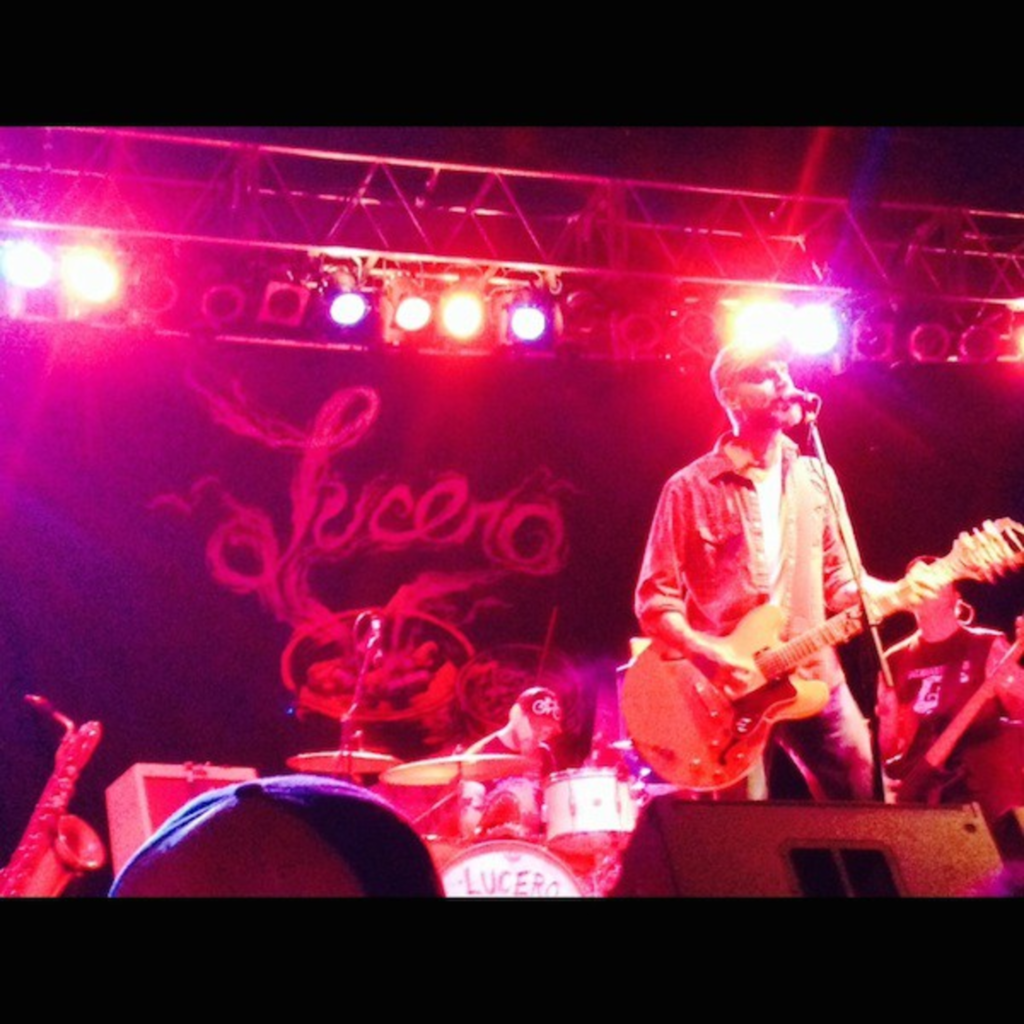 Jim Spake on sax and Scott Thompson on trumpet added to the resonating, gritty, country sound and unsinkable spirit in songs like “Kiss the Bottle” and “Sweet Little Thing.” Songs like “Goodbye Again” had everyone from adults to little children swaying along and breaking bedtime. Nichols’ wizened vocals, combined with the whiskey-roughened lyrics, seemed to leave concertgoers in a state of rawness.

Refreshingly, Lucero didn’t seem worried about the jump from happier, major chords to minor ones, and the songs took listeners on a roller coaster of emotional expression. Songs like “The War” and “Women & Work” accentuated Nichols’ and keyboardist and accordionist Rick Steff’s musical relationship, which was an inspiring thing to watch. The two dueted on multiple songs, too – even an unplanned request for the Beatles’ “Blackbird.” The woman who requested the song was called up onstage to sing part of the tune, as Nichols said he didn’t know the lyrics. “You’ve got more balls then I got, I’ll give you that,” Nichols said to the fan. Steff’s french forked facial hair swayed as he laughed along with the crowd.

Nichols seemed extremely pleased throughout the set, engaging with the crowd. He switched hats with a guy standing right in front of the stage because the guy asked him to, while crowd members hollered at Nichols and the rest of the band as they laughed along.

Leftovers: Right before Murder by Death played “I Came Around,” Turla shared that his grandpa had died that day. He told a ‘dad joke’ about Sean Connery in his honor. Pretty respectable that he could jump into things after something so devastating. Also – OK, so, Lucero’s bassist HAS to be twins with Chumlee from Pawn Stars.

The set lists below are to the best of my ability, so please leave corrections in the comments.

Murder by Death set list:
Kentucky Bourbon
You Don’t Miss Twice (When You’re Shaving With a Knife)
Steal Away
King of the Gutters, Prince of the Dogs
The Curse of Elkhart
I Came Around
Fuego
Lost River
Brother
Until Morale Improves the Beatings will Continue
??
Coming Home

Lucero set list:
The Devil and Maggie Chascarillo
My Best Girl
On My Way Downtown
Nights like These
It Ain’t Gonna Be Good
Texas & Tennessee
Women & Work
Goodbye Again
Kiss the Bottle
Hey Darlin’, Do you Gamble?
Raising Hell
Drink till We’re Gone
Chain Link Fence
What Else Would You Have Me Be?
Slow Dancing
The War
When You Decided to Leave
The Last Pale Light in the West
Bike Riders
All Sewn Up
Sixes and Sevens
Darken My Door
She’s Just That Kind of Girl
Tears Don’t Matter Much
Fistful of Tears
—
Blackbird (Beatles)
Sweet Little Thing
That Much Further West
Hold Me Close