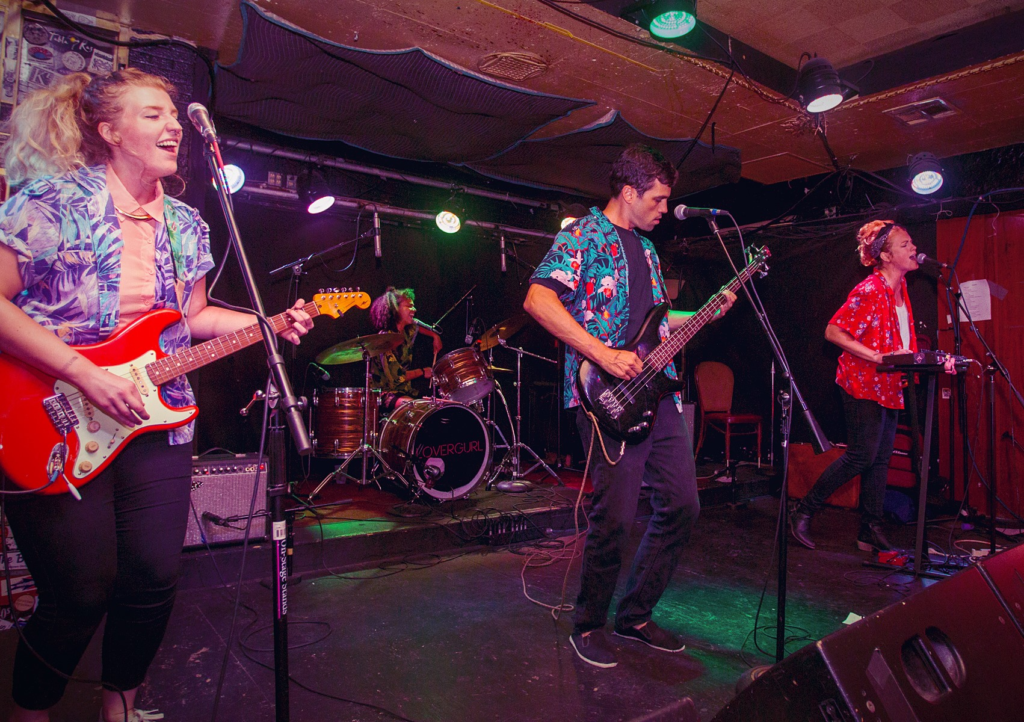 In this stupid era of “fake news” and right-wing polemics that challenge basic journalism, nothing is as powerful — or as controversial — as the unvarnished truth. Tonight’s exhibit: Kansas City’s Lovergurl, which plays RecordBar at 8 to celebrate the release of its debut EP, The President Is a Sex Offender. It’s the truth, of course, but it’s also a declaration of intent by a band that has announced itself as one of the city’s most important and vibrant.

On disc, the synth-pop quartet funnels its straight-faced politics through buzzsaw guitars and driving drums, which prop up Stephanie Bankston’s warbling keys and the dynamic vocals of her and drummer-singer Brook Worlledge. Surprising only because live, their delivery is all edge and spit. The album shows range and command; Bankston and Worlledge can go from a warble to a full-throated scream in a matter of bars.

The album itself is Lovergurl’s frenetic and Hawaiian-shirt-clad live shows scrubbed clean for mass consumption. That’s not a dig; the sound is rich and balanced. But this is no lo-fi, four-track punk tape. The band spent months in the studio polishing every track. The result is a shiny new race car for the band’s unabashed attack on the shit-bog of racism, homophobia and misogyny now stinking up America under the sex-offender-in-chief.

“My Body” is a wrecking ball of an album opener, a blistering punk anthem with haunted-house synths and, at its apex, plunging screams. Elsewhere, “Oh No!” puts a distorted, Burger Records–style teen-pop soundtrack to a common lament: that at some point or another, most women have gotten too close to a misogynist. Just because you have a pretty face, doesn’t kill the ugly taste in my mouth, Bankston croons. The EP ends with “Prospect,” a brooding, slightly depressive ode to Prospect Avenue, that longstanding emblem of racial and economic inequality in the city. As a whole, the EP is eclectic, bright and ultimately powerful — a fitting start for the most promising band in the city.

Lovergurl’s record release show with the Bad Ideas and La Guerre is tonight at RecordBar. The $10 cover comes with a copy of the EP.