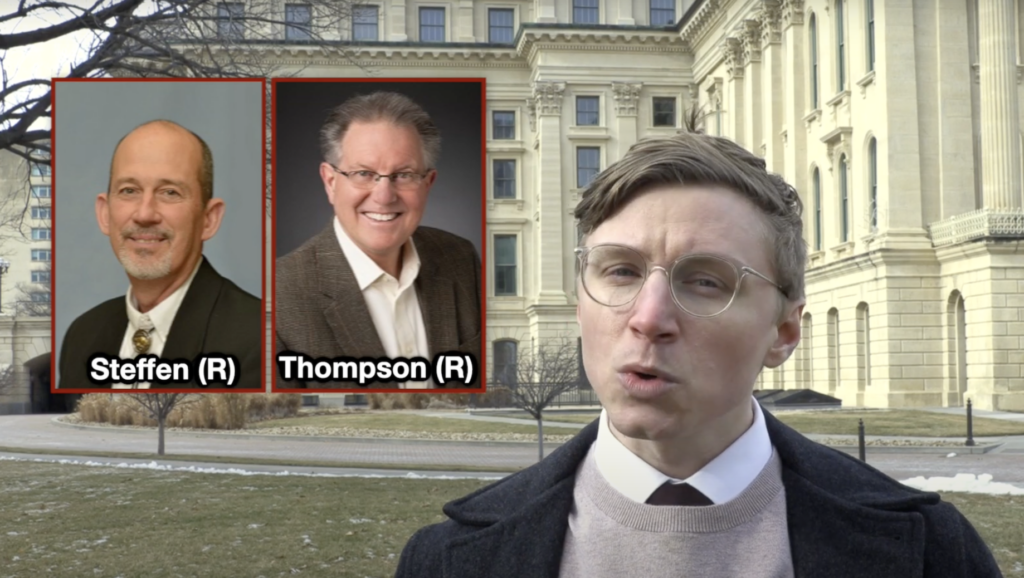 Here is this week’s video and transcription:

I can’t believe I’m still making these videos, but, here’s what happened the 1st week of the 2023 Kansas legislative session!

Election Outcomes
The 2022 election season which included a landslide victory for abortion rights, voters rejecting a power grab by the Legislature, and all KS Supreme Court Justices being retained came to an official end on Inauguration Day where Democratic Gov. Laura Kelly was sworn in for a second term. While Democrats picked up a House seat, some moderate Republicans were purged in the primary resulting in Republicans moving farther to the right and maintaining their supermajority control of the Legislature.

Medical Marijuana
Last month Kansas police arrested a terminally ill cancer patient on his deathbed and charged him with possession of Marijuana generating national outrage. Kansas is one of the only states in the country that hasn’t legalized medical marijuana.With the Governor and House on board it seemed certain to pass this year until key opponent Senate President Ty Masterson (R) removed Senators from the committee working on the bill and declared it “not a priority.”

Catholic Sex Abuse
The Kansas Bureau of Investigations concluded their 4 year investigation finding that every catholic diocese in Kansas conspired to cover up sexual abuse involving nearly 200 clergymembers, 15 victims died by suicide following abuse, and 14 priests should be criminally charged, but the alleged pedophiles are protected by the Kansas statute of limitations. A bipartisan group of lawmakers are introducing a bill to allow the alleged pedophiles to be prosecuted, but Sen. Pres. Masterson (R) has made dismissive comments and he and Speaker Hawkins (R) will ultimately decide if the bill gets a vote.

Controversial Bills
The first 2 weeks legislators are mostly holding information hearings, but already several controversial bills have been introduced including 2 co-sponsored by Sen. Steffen and Sen. Thompson. SB20 would virtually abolish all vaccine requirements and require childcare facilities to pay $25,000 to anti-vax parents if their child is rejected. SB12 would make it a crime for doctors to provide certain healthcare to transgender Kansans under 21.

Governor’s Budget
5 years ago Kansas faced a billion dollar deficit, but Gov. Kelly was largely able to repair the state’s finances in her first term paying back hundreds of millions in delayed payments, double counted money, and debt incurred under Brownback. The state now has a record surplus of roughly $3 billion dollars. The Gov. is proposing a variety of incremental funding increases in public services, funds to prevent college tuition hikes, cyber security and infrastructure projects, increasing special education funding, paying debts off early, and adding a half billion dollars to the state’s rainy day fund. The biggest fight this year though, will be over tax cuts with the Gov. wanting an immediate end to the food tax & Republican legislators eyeing income & corporate tax cuts.

Coming Up
This is the start of our 7th year covering Kansas politics and it’s only possible through your support. If you’re able please consider becoming a monthly donor at loudlight.org/donate. Stay tuned, stay engaged, and until next time, thank you so much Kansas!