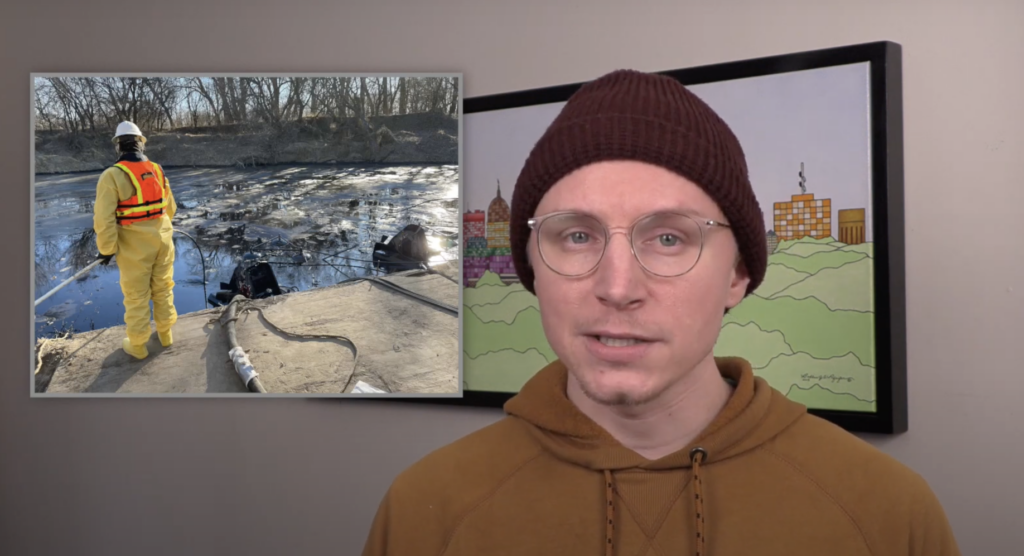 Here is this week’s video and transcription:

Abortion Restrictions
Newly appointed Republican Senator Blasi introduced a bill (SB65) authorizing cities & counties to restrict or even ban abortion. This comes despite Kansans voting last August in a landslide victory to protect abortion rights. The bill requires any local restriction to be even more stringent than state law even though some state abortion laws have already been struck down as unconstitutional. If passed it would allow the state’s 730 cities and 105 counties to experiment with abortion regulations and use local tax dollars in any resulting lawsuits.

Oil Spill
Last month the largest Keystone pipeline oil spill in history occurred in Kansas with an estimated 588,000 gallons of crude oil spilling out across fields and into a creek. The oil mix called dilbit presents unique environmental concerns and challenges and could take decades to clean up. The corporation responsible, TC Energy,  received millions in tax breaks for the pipeline and may not have to pay the full cost of cleanup. Republican legislators in Kansas have largely ignored the spill so far with no hearings scheduled to discuss it.

Appeals Judge Confirmation
District Judge Rachel Pickering was nominated by Gov. Kelly and unanimously confirmed by the Kansas Senate to sit on the Kansas Court of Appeals. Judge Pickering makes history as both the first Hispanic person and first former public defender to sit on the state’s 2nd highest court.

School Tax Holiday
There seems to be bipartisan support for creating a back-to-school tax holiday that would make school related supplies and child necessities like clothing sales tax free for a period of time before school starts. The key debates will be over when, how many days long, and what all qualities for the tax exemption.

Election Bills
Over 20 election bills have already been introduced this year, and 2 have hearings this coming week. First, a bill (HB2013) to make Kansas hold runoff elections if a statewide candidate doesn’t get 50% of the vote, and second a bill (HB2056) to abolish the 3-day grace period that allows mail ballots to be counted as long as they were postmarked on or before election day. The grace period currently protects tens of thousands of Kansans from having their votes thrown out and proposals to abolish it have failed the last 2 years.

Coming Up
Next week starts a frenzy of committee hearings where legislators vet bills and hear testimony. On Wednesday, there are advocacy days on payday loan reform and voting rights in the Statehouse. Now is a great time to reach out to your State Senator and State Representative to let them know what you care about. Thanks for liking and sharing these videos. Until next time, thank you so much Kansas.