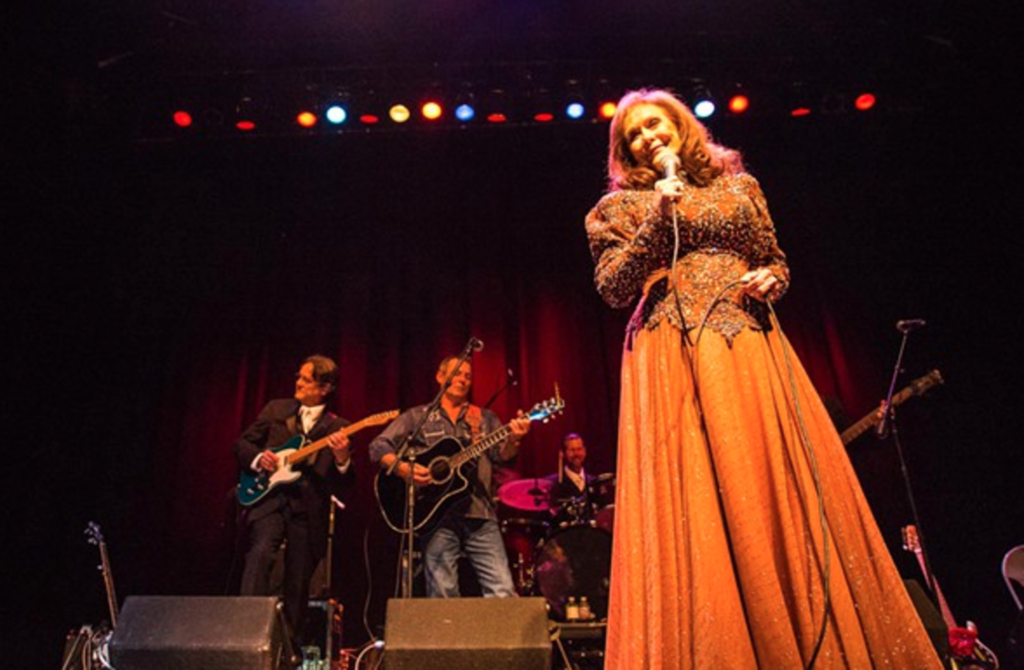 There was a moment during Loretta Lynn’s show last night at the Uptown Theater, as she stared, sharp-eyed and grinning, into the sold-out crowd, when she sang “You’re Looking at Country.” It was her second song of the evening, and she did a bit of sassy finger-pointing as her voice, clear and strong, rang out the refrain: When you’re lookin’ at country, you’re lookin’ at me.

She hadn’t yet greeted her audience. She stood before it, dressed in a flowing garnet-colored dress – all tulle and sequins and glitter, looking for all the world like somebody’s fairy godmother – and she seemed to be driving home a point: At 82 years old, Loretta Lynn is still in charge. 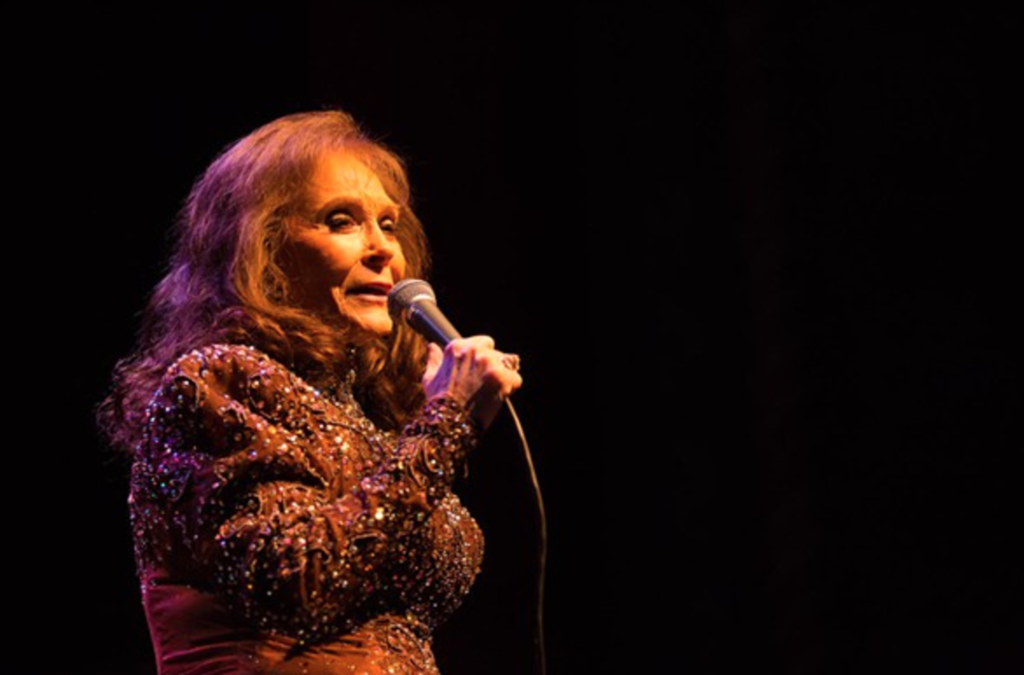 Following a handful of songs by her son Ernie Lynn, who also plays in Lynn’s band the Coal Miners, and her twin daughters Peggy and Patsy Lynn, Loretta took the stage. She rolled through the first four songs with hardly a pause in between, including “You’re Looking at Country,” and though she couldn’t have sounded better, I couldn’t help but wonder if that was going to be how the night went – a brisk, speedy set from Lynn and then off we go.

But after the first bundle of songs, Lynn seemed to loosen up. Perhaps she just wanted to shock us all into the reminder that she was still on top of her game, that this was not her retirement tour (indeed, it seems she is pointedly not calling it that). In any case, after she sang “Blue Kentucky Girl,” she began chatting, in a casual, kitchen-conversation sort of way, with the crowd.

“Yes, ma’am,” chorused her Coal Miners immediately. Laughter rippled through the crowd, but this wasn’t schtick – rather, the respect deserving of the queen of country.

After she got through “You Ain’t Woman Enough (To Take My Man)” (with some help from the crowd at the chorus) and the swelling ballad “Love is the Foundation,” Lynn called for a chair. One of her band members brought it to her, and she scolded him good-naturedly for setting it down on her dress. Once she’d arranged herself, she faced the crowd and smiled.

“I love you all,” she declared suddenly. It was a simple statement and she didn’t dwell on the sentiment, but it felt entirely authentic. We felt a sort of warmth then that usually only our mothers inspire in us, and we were proud of ourselves for turning up, for filling the house, for being a good audience.

After a heartbreaking cover of Patsy Cline’s “She’s Got You” – “My favorite Patsy Cline song,” Lynn told us – guitarist Bart Hansen introduced Lynn’s accomplished Coal Miners. He called her “Miss Loretta,” and then he sang Conway Twitty’s part in Lynn’s duet with him on “Lead Me On.” Dressed all in black with a cowboy hat planted firmly on his head, Hansen’s voice was resonant and deeply rich; if Lynn’s voice was homemade scratch biscuits, Hansen’s was the honey, and they complemented each other beautifully. We were all cowboys and cowgirls last night, and it was never felt as thoroughly as in that moment. 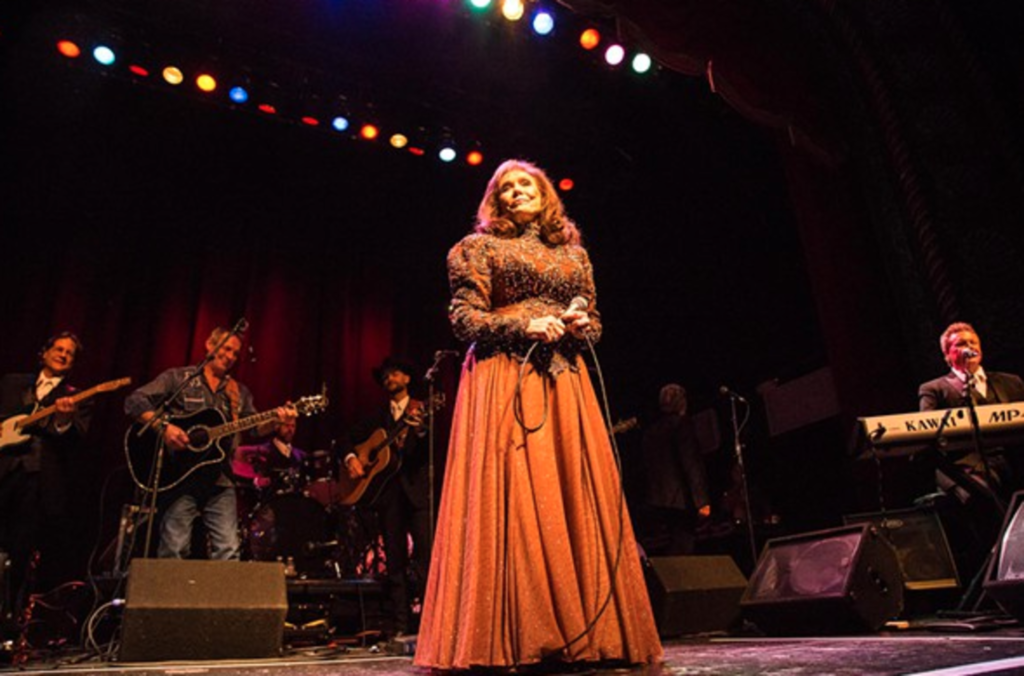 Lynn’s catalog is extensive – 117 albums in total, Patsy Lynn reminded us at the onset of the show – and there were plenty of shouted requests throughout the evening. But there’s no one who could have been dissatisfied by songs that made it onto the setlist: Lynn delivered “The Pill” and “Another On the Way” with all the dry-humored cheek you’d expect of her, and those tunes were also sad reminders of how clever and relevant country music as a whole used to be. (Before Lynn took the stage, the Uptown was playing Garth Brooks over its speakers, and a couple behind me gruffly complained that that didn’t “feel right for the occasion.” Nothing against Garth, but I kind of agreed.)

There was plenty of Lynn’s attitude to go around, and after she gave us “Honky Tonk Girl” – the first song she ever wrote, she said proudly – she told us about the new record deal she’d signed earlier this month with Legacy Recordings. She’s got a mass of songs, she said, that she’ll be releasing on her first record since 2004’s Grammy Award-winning Van Lear Rose next year. She’s not sure if Legacy will like them, though.

Lynn herself would sometimes solicit requests from the audience, only to ignore them and stick to her setlist – except, rather remarkably, for one song. Someone had called for the 1967 tune “Sweet Thang,” Lynn’s duet with Ernest Tubb.

“Sure, we can do ‘Sweet Thang,’” Ernie Lynn said, nodding from his spot with the band. Lynn was less sure. 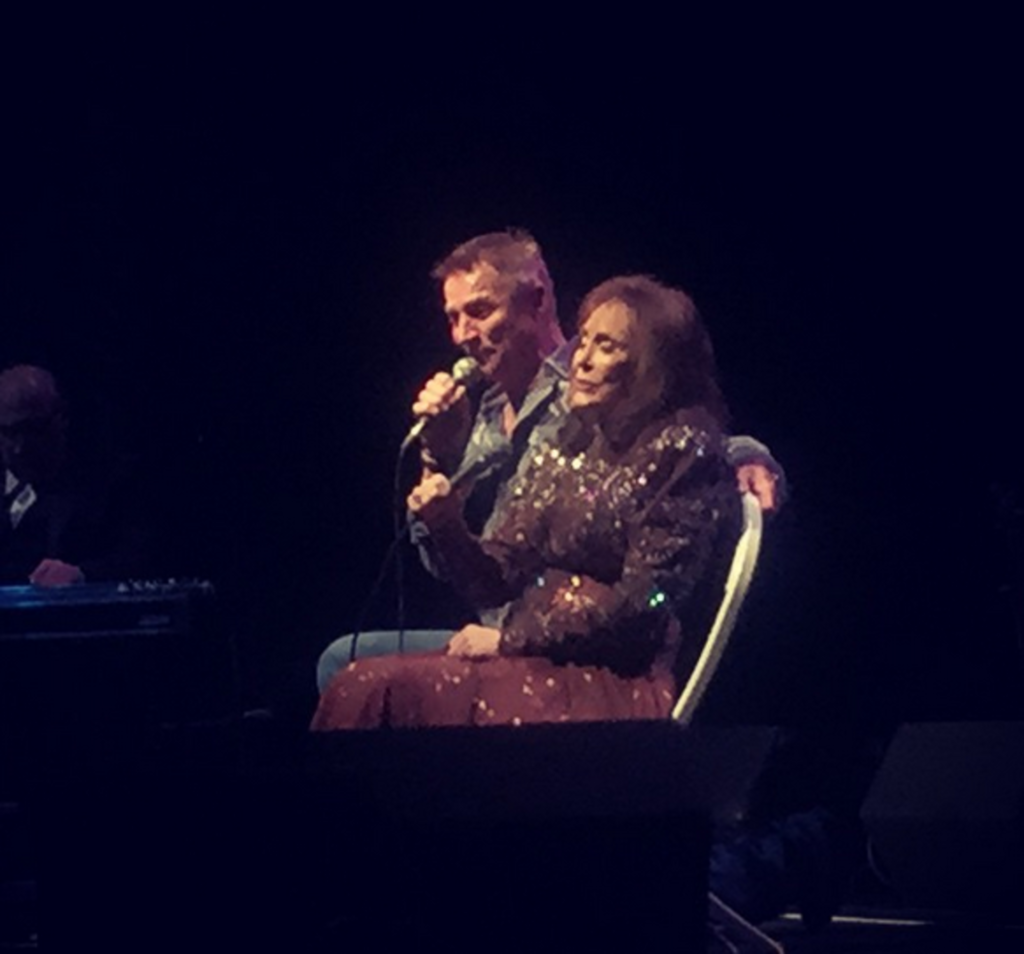 Ernie knelt down next to Lynn, much like he had done for “Feelin’s,” and began the song. As Lynn’s part approached, I wondered if this would be the moment where we saw some vulnerability, where she would, perhaps, falter a bit. Not so. Lynn roared through her verses like it was nothing to her, and honestly, it probably wasn’t.

“That’s the first time we did that in probably 15 years,” Ernie said as he settled back behind his guitar. “There ain’t but one Loretta.”

The band came forward after that, and Loretta smiled in her chair as they performed two songs, and then she was on her feet again to close the show out. She ended, of course, with “Coal Miner’s Daughter,” and the moment the song was over, Ernie was there to take the microphone from her hand.

Lynn grasped the edges of her skirt and did a few half-twirls, smiling at her adoring congregation. Yes, there ain’t but one Loretta Lynn. 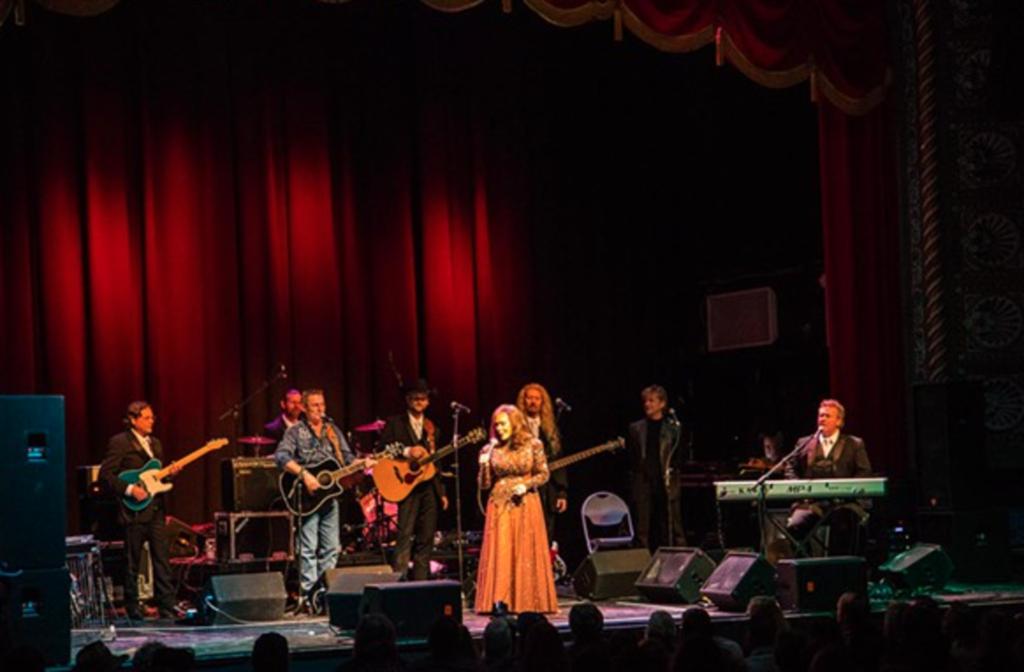 Leftovers: Opener Nikki Lane performed for an hour, an extended set due to the cancellation of Wanda Jackson, originally set to share the headlining bill with Lynn. Well, Lane was a terrific consolation prize. The South Carolina singer-songwriter has a voice as lonely as the desert and as expansive as the prairie, and she’s charming as hell, too. Well worth a listen here. 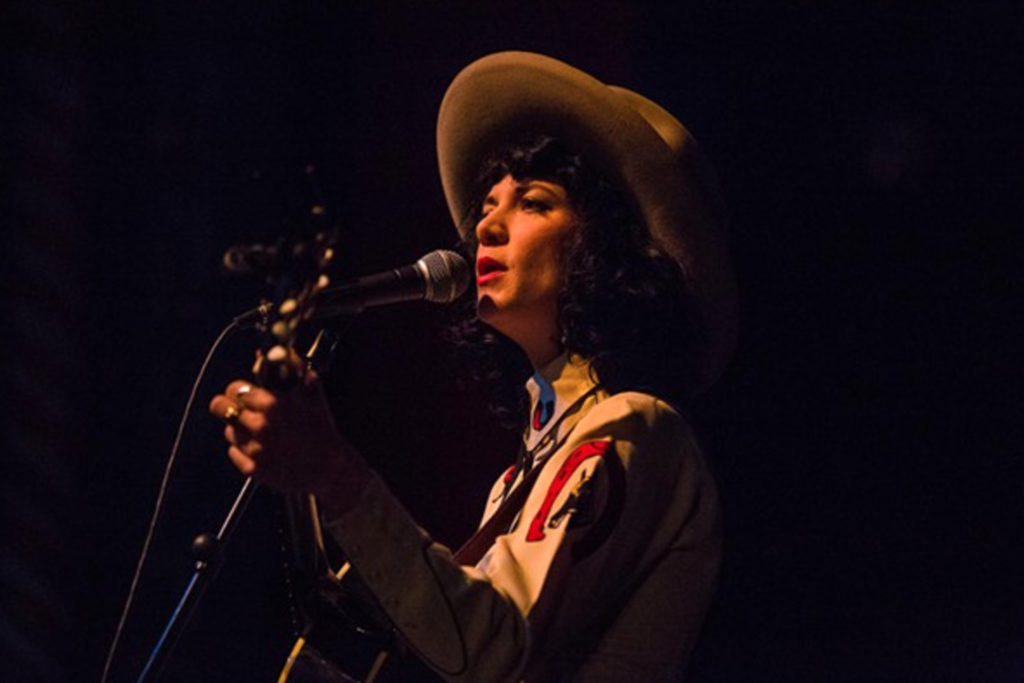 Setlist:
They Don’t Make ‘em Like My Daddy
You’re Looking at Country
When the Tingle Becomes a Chill
I Wanna Be Free
Blue Kentucky Girl
You Ain’t Woman Enough (To Take My Man)
Love Is the Foundation
Fist City
She’s Got You (Patsy Cline cover)
Lead Me On (duet with Bart Hansen)
Crazy Arms (Bart Hansen solo)
One’s On the Way
The Pill
Honky Tonk Girl
Your Squaw Is on the Warpath
Don’t Come Home A’ Drinkin’ (With Lovin’ On Your Mind)
Feelin’s (duet with Ernie Lynn)
Sweet Thang (duet with Ernie Lynn)
House at the End of the Road (The Coal Miners)
Peaceful Easy Feeling (The Coal Miners, Eagles cover)
Everybody Wants to Go to Heaven
Where No One Stands Alone
Coal Miner’s Daughter