Long-jumping into the championship class 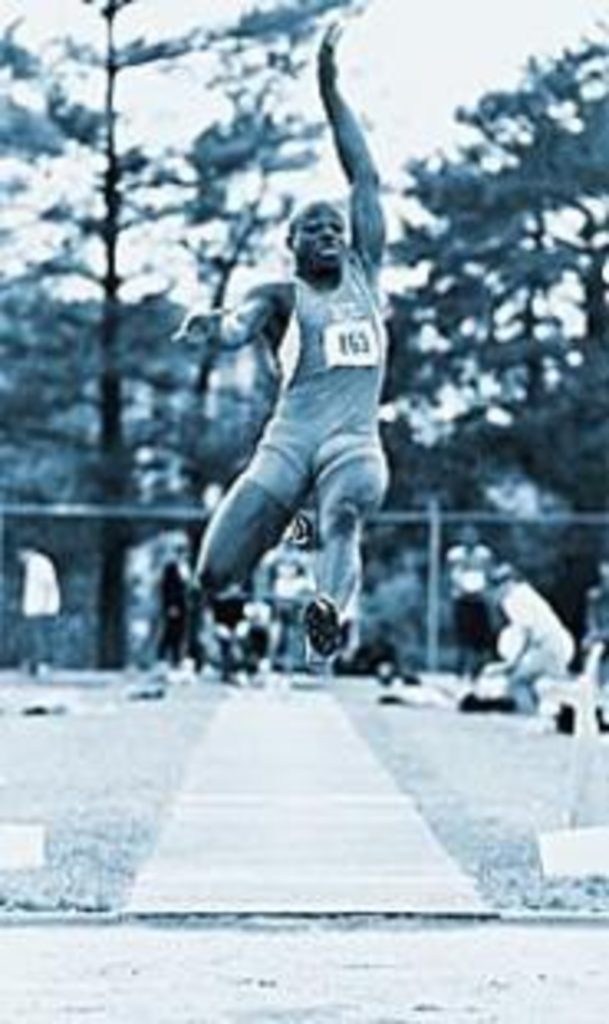 Long-jumping into the championship classWith a mascot like the Kangaroos, the image would be that the University of Missouri-Kansas City is awash with long-jumpers. Truth is, no track and field athlete from UMKC has ever advanced to the NCAA championships. But bad puns aside, things have changed this season … and hopes are high as freshman Deandre Free leaps his way into the collegiate elite.

The Kansas City native and Central High graduate is an automatic qualifier for the NCAA Outdoor Championships, coming up May 31 through June 3 in Durham, N.C. “I’ve seen the national championships,” says Free, “but I never would’ve thought I’d be there this soon.”

But UMKC Assistant Track Coach Chris Brown hopes Free uses that youth to his advantage. “We’re not putting any pressure on him. I’m telling him, ‘Just go in there, be technical, and do what you do, and whatever happens, happens. The big thing is, we’re there, ‘” says Brown.

Free has battled tendinitis in his knee throughout his freshman campaign but managed to qualify for nationals with relative ease. His best jump — of 26 feet, 3 inches — is nearly half a foot longer than the mark needed to automatically qualify. That length ranks him sixth in the United States, 13th in the world, and number one among people born since 1981.

But surprisingly, even with a wealth of talent, Free was not highly touted out of high school. “He was kind of a sleeper. Some of the smaller schools thought he was going big time. Some of the bigger schools passed over him,” says Brown. “And one of the reasons is that he came out of high school as a decathlete. I think a lot of people are kicking themselves right now, thinking they really should’ve gotten more excited about that guy and gone and got him.”

Brown changed Free’s focus to the triple jump and long jump, and from there, things have really taken off. Free credits much of his collegiate success to his coach’s influence. “He’s great with every jumper on this team,” Free says. “He changed technique … ironed out all the wrinkles. I have confidence in my coach that he can make me … maybe world-caliber. Coach Brown has given me a lot of confidence and a lot of motivating words.”

Brown feels Free has always had the talent — tapping into it is simply a matter of encouragement and tinkering with mechanics.

“We just made a few minor technical corrections (from high school) … and there’s still a long way to go. But more than anything else, it’s just making the kid believe he can do that kind of stuff.”

Free grabbed the spotlight in a recent warmup for nationals at the Mid-Continent Conference Outdoor Track and Field Championships at UMKC, held May 11 through 13. He took first in the long jump and triple jump, and for the first time in his collegiate career, Brown opted to let Free compete in the 400 meter dash.

“He led off for the first time and did really well. We were projected about fourth and threw him out there, and (we) wound up second. He ran it a little bit in high school, but he’s never been one of our main sprinters. If we tried it more we might discover he’s pretty fast,” Brown says.

Whatever the achievement, Free is rather soft spoken and reserved about his accomplishments — and what lies ahead at the national championships and beyond. “I just hope to jump well. My goal is to finish in the top 10,” he says. “I’m so nervous I don’t know what to think, just get there and do my event.”

Free failed to make the minimum mark earlier this year at the Texas Relays, but he hopes to build on that experience when he heads to Durham at the end of the month. “If you leave the bad things alone, they might come back and haunt you,” he says. “I think you should attack the mistakes you make so you don’t make them again…. I’m just glad a ‘Roo is gonna be (at nationals) for the first time.”

Brown says that in his early days with UMKC’s program, he took some ribbing for the Kangaroo mascot, with friends telling him the school had better have some good jumpers. “We kind of use that to our advantage and joke about it with the kids. We say, ‘You better be out-jumping a horse or a cow or whatever.'”

And Brown feels that Free should be out-jumping the competition for years to come, especially after heading to nationals in his freshman year. “As a freshman to go in there, it’s really intimidating,” says Brown. “It’s probably the most chaotic, wild situation you can imagine, and he’ll be one of only two freshmen that are even in the field.” Brown hopes to see Free finish in the top eight, get named an All-American, and pave the way for an even brighter future.

“When he goes back as a sophomore, junior, and senior, it’s going to be old hat. There’s not going to be that intimidation factor. He can relax and do his thing just like any other meet.”

Free has already qualified for the Olympic trials this year, and Brown thinks the sky is the limit. “To be doing what he’s doing at this stage in his career just projects so far into his future. Anything is possible. The ultimate goal might be to be an NCAA champion and make an Olympic team in another four years.”