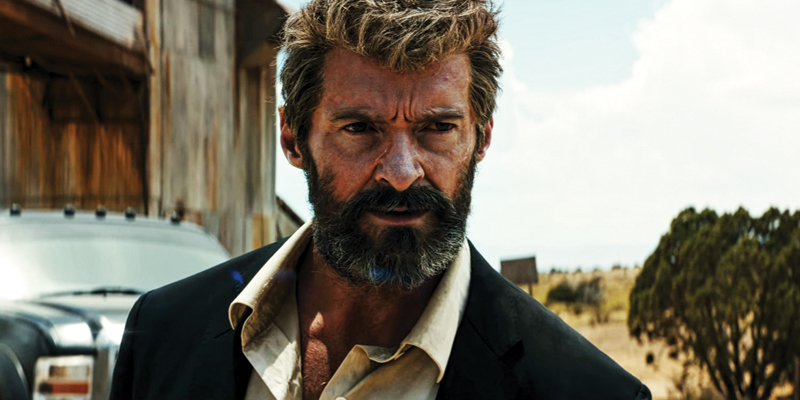 “Fuck,” says Wolverine as Logan opens — an immediate signal that this final X-Men film to feature Hugh Jackman will benefit from a different tone.

He’s been shot and must again reluctantly rip a bunch of thugs to shreds with his adamantium claws. But this time, this R-rated movie shows us the carnage, the bloody damage that Logan has been inflicting on people for 70-some years. His world-weariness has always been a core part of the Wolverine legend, but only now do we witness evidence of this defining trait at a visceral level. And the point isn’t just to shock us.

Who must this most gravely serious of Marvel characters thank for our being able to bear witness? Well, that would be the title character of last year’s Deadpool. That surprise, tongue-in-cheek smash paved the financial way for Logan to chase an R rating — though the films couldn’t be further apart in their storytelling strategies.

No, Logan co-writer and director James Mangold has instead fashioned the film as a near-future dystopian Western — complete with a dust-storm-Texas setting, desperate outlaws on the run, and a reluctant father figure who finally decides there’s something worth fighting for. (Having the characters watch Shane on TV in a motel room is too on-the-nose, but I’m not about to complain.)

The X-Men franchise’s jumping around in time may cause headaches for anyone trying to suss out a chronological timeline, but it also offers freedom for filmmakers to explore some of the comic book’s most resonant stories. This one is loosely inspired by the 2008-09 Old Man Logan storyline, by Mark Millar and Steve McNiven. Because this movie isn’t slavishly tethered to the other films in the series, it has the freedom to be its own beast entirely, and it’s easily the most successful overall since 2003’s X2: X-Men United.

Logan’s mutant healing powers mean he’s been alive for a very long time. In Logan, it’s taken its toll. He’s a suicidal alcoholic who can’t quite bring himself to end it all, mainly because he has people who depend on him: a light-sensitive albino mutant named Caliban (Stephen Merchant), and his old mentor, Professor Charles Xavier (Patrick Stewart).

Professor X has a degenerative brain disease that leaves him suffering from general dementia and — worse for mankind — renders his brain the world’s most dangerously unhinged weapon of mass destruction. Invisible psychic powers are challenging to visualize in any kind of interesting way, and Logan marks the first time a filmmaker’s vision of Xavier’s power has lived up to the terror that it actually causes.

Wolverine has always been a Mad Max–type character. Trouble follows the escaped super-soldier wherever he goes. People he gets close to always end up dead. This is why he initially refuses to take under his wing a mysterious young girl named Laura (Dafne Keen). His inherent goodness, however, is why he relents, eventually hitting the road with Xavier and the child.

Without 15 other X-Men crowding the plot, Logan is able to focus on two things: the interplay among its three main characters, and the larger themes at work. Stewart’s haunted, heartbreaking turn gives the film a tragic sense of mystery that the screenplay smartly avoids over-explaining. Why have no mutants been born in 25 years? What happened to the ones who were alive before then? What atrocity has the professor committed to land himself in this disabled and morally humbled state?

Jackman is equally impressive, with a script that gives him the opportunity to breathe, and at last speaks to Wolverine’s core conflict. The character has always understood his mutant abilities to be a curse, and now the adamantium skeleton constructed inside him by the government is poisoning him. He’s weaker, hurt more easily, slower to recover. Mentally, he’s his own worst enemy — an inner conflict made thrilling here.

The threats eating at the edges of Logan are relevant in interesting ways as well. The creating and breeding of mutants as super-soldiers parallels both the recent rise of artificial intelligence and last year’s groundbreaking birth of the first baby created from the DNA of three persons. In the film’s version of 2029, big business controls the food supply, and the genetically modified food source keeps the population under control.

Logan also gets meta, with the inclusion of actual X-Men comic books in the franchise universe. Logan sees one and immediately dismisses it as silliness, but through one simple, emotionally satisfying revelation late in the movie, Logan argues that stories like this — like the Westerns before them — can be culturally crucial because they give us hope when we need it the most.