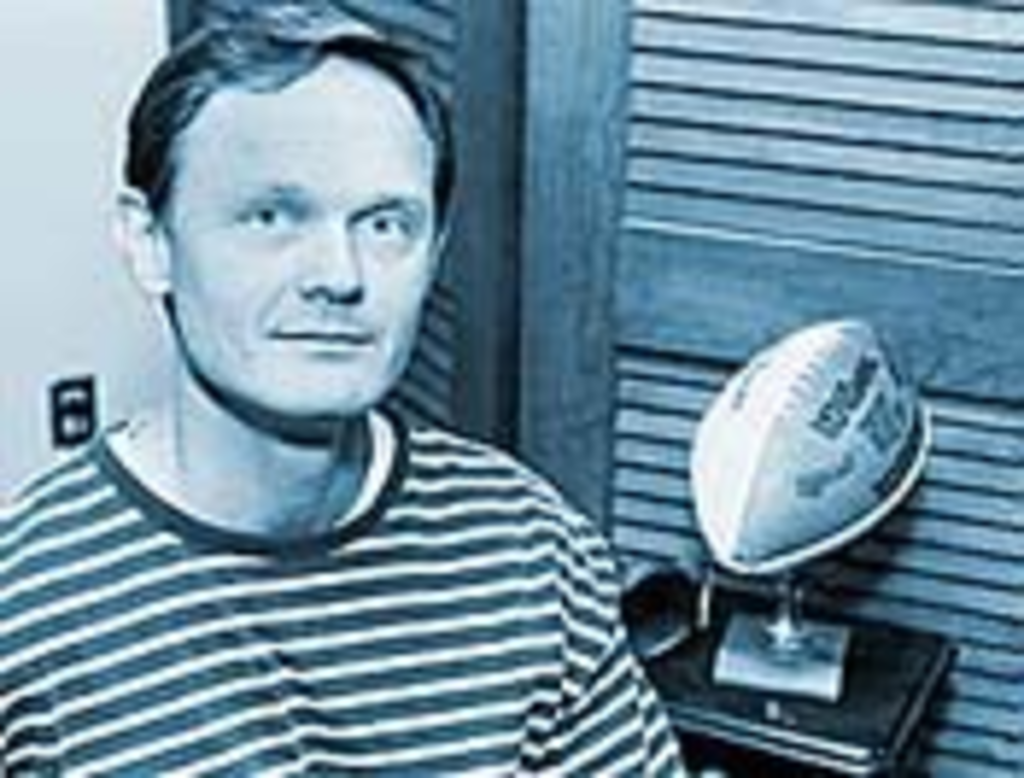 Between Feb. 24 and 26, nearly all of the possible first-round NFL draft picks will assemble in Indianapolis to be poked, prodded, weighed, measured, and run through a rigorous body of physical tests to see how high they can jump, how fast they run, and how quickly they can change direction. Every year at the NFL Combines, front-office personnel of every NFL team take the measurements of all the college players who have declared themselves eligible for the April draft. Because the salary in a player’s initial contract depends on his placement in the draft, a good showing at the combine is imperative.

Between the physical tests that resemble a seventh-grade Presidential Physical Fitness Test on steroids, players will meet with Liberty, Mo., resident and William Jewell College professor Robert Troutwine. In Troutwine’s room, athletes will answer a barrage of seemingly unrelated questions, such as, “If an animal, I see myself more as a A) dog or B) cat.” Along with a player’s 40-yard dash time, the answer to Troutwine’s questions will play an important role in determining how high the player is chosen in the draft and, consequently, how high his initial contract salary will be.

In 1984, Troutwine, whose doctorate is in psychology, began using his Troutwine Athletic Profile (TAP) to test college athletes’ mental and emotional aptitudes for their chosen profession. It has been said that football is a game of inches. For Troutwine and the 10 NFL teams with which he consults, it is also a game of knowledge and experience in the sport, emotional and motivational states, and social and relationship variables. Over the past 16 years, Troutwine and his associates have refined the TAP to help predict the possibility of success at the professional level.

Gone are the days of a commander quarterback on the football field who makes decisions by the seat of his shiny pants. The game now involves assistant coaches for every position; offensive, defensive, and special teams coordinators; and adjustments made after each play, based on computer-generated information and instant photos of the opposing team’s alignment. Now players must “read” the opposing team’s alignment and make snap judgments on the field in the scant seconds before the ball is snapped. Therefore, today’s game demands a player of remarkable intelligence.

Becoming a consultant for one-third of the teams in the NFL was not an overnight entrepreneurial success for the small-town college professor. Convincing hard-nose disciplinarians to put stock in the mental side of the game wasn’t easy, Troutwine says. “When I look back on it, it seems like a long time. Some people might see this as an overnight sensation, but it’s not. It’s a lot of follow-up on my part — presentations and that type of thing to convince these people. There’s still old-school people out there that say, “Well, I don’t care about that stuff,’ and “Who cares what they got on some test?’ but I just sort of let the reports’ track records speak for themselves.”

The effect of mental ability on a player’s success can be seen using the example of two stellar quarterbacks entering the 1998 NFL draft. Each had similar statistics in college, and each had the size and skill to play pro football. Peyton Manning was chosen first by the Indianapolis Colts, set NFL rookie QB records, and led his team to the playoffs two years later. Ryan Leaf was chosen second by the San Diego Chargers, lost his cool several times with reporters and teammates, injured himself in a pick-up football game, and then faded from sight.

“If I could have gotten Ryan Leaf when he was 14 or 15 (years old), he’d be a whole different story today,” says Troutwine, touting his latest test, which is designed for younger student-athletes. “To me, that’s very exciting. A junior high athlete can now have the same information as a first-round draft pick, or a senior golfer can learn about the mental part of their game.”

Access to a test like the TAP would have made a difference in his own career, Troutwine believes. “I was a pretty good wrestler, but I had some performance issues. In my career, I’d get pretty anxious and didn’t know how to deal with it. So by the time the match came around, I’d be worn out. If somebody would have just …” he says, his voice trailing off.

“So why do some blossom and others don’t?” asks Troutwine. “They’re similar physically, but more often than not, the tie-breaker is mental and emotional. I’m sure that I’m biased, but I think that, obviously, a person like Jevon Kearse (rookie defensive end of the Tennessee Titans) — they call him “The Freak’ (because of his physical dominance) — is so off the scale in terms of physical attributes that what he has been able to do this year is amazing. You’d have to say that, physically, he’s like Michael Jordan. Both of those guys have very good heads on their shoulders. The things that they are able to do are almost purely physical, but for most players, you are not talking about much physical difference.”

But predicting a player’s mental capacity for a sport such as football and that athlete’s ability to function in the less violent world around him is not an exact science. In the past two months, two NFL players have been arrested for murder, two Chiefs players have been implicated by the FBI in a drug-running operation, and another was accused of stealing electronic equipment from a local store. Because of such high-profile incidents, the NFL is beginning to get a “thug life” image in the media.

However, according to Troutwine, who has tested nearly every player currently playing in the NFL, that is not the case. “If anything,” he says, “I think the pendulum is swinging back. Believe it or not, there are fewer thugs (in the league now). I would say that, in the early to mid-’90s, I would have probably agreed that there were more cases that looked a little bit scary off the field. Frankly that kind of peaked, and I think it is a trickle-down effect.” He also notes that more colleges are more aware of the emotional side of the game. “That may or may not explain why … it might be getting better despite the headlines that happened recently.”

Although it may be impossible to know that a player will have severe off-field problems, such as the high-profile murder cases involving Rae Carruth and Ray Lewis, the TAP can reveal some telling factors. “A player might lack self-control,” says Troutwine. “All I know is that a player might have had some antisocial tendencies. What I don’t know is how and if those impulses will be played out. There’s the genie in the bottle, and if he ever gets loose, look out.”

However, exactly how that genie will get out and exactly what it will do once released are unknown factors. “In terms of acting out,” says Troutwine, “you don’t know whether it will be substance abuse, short temper, or some other type.”

And it’s not only football players who may have hidden genies. Troutwine has worked extensively with corporate clients to run his test on potential employees. “I helped a company hire a national sales person, and he did everything that I predicted at his job,” says Troutwine, “and then killed his wife and daughter on Christmas Eve. There was nothing in his profile to suggest that. I look only at performance factors. You would have to totally alter the direction of your study if you were after predicting something like that.”

The factors that produce winners on the football field often are the very same ones that predict winners in the corporate world, says Troutwine. “It’s amazing how much overlap there is. I say “amazing,’ but in some ways, it’s exactly what you’d expect.”

Yet football players are often stereotyped as being oversize children with a penchant for extreme violence and little self-control. Players run the gamut in intelligence. “Like in any profession,” says Troutwine, “there’s a whole range of intelligence. I think in football there probably is some validity to the concept of football intelligence. A guy might have a 1.8 grade point average, yet you get him on the field and he’ll have a natural knack for knowing where the ball is going.

“Actually, safeties and defensive backs, if you were to look at the norm of the population, they are above average in intelligence. There’s always been a stereotype that offensive linemen are very smart. And there is some credence to that. You’ll have some good linemen that are of beneath-average intelligence, but as a group, (they are very smart),” he says.

So when a young man of above-average intelligence sits down to answer the question of whether he is more like a dog or a cat, what does he say? “There’s sort of a subliminal or, I guess, subconscious belief that cats are a little more aloof or independent, where dogs are man’s best friend and have things like dogged determination. But team orientation is reflected a little bit in the answer to that question,” Troutwine says.

So the dog is the better draft choice? “Really, there is not a more-right answer. Dogs are used to being stroked a little bit more. Depending on other questions, if someone is basically a self-starter and so on you can basically leave them alone and they will work in that environment,” Troutwine says. The key is how a coach chooses to use the information.