Local artists will define two concourses of the new airport

Among the many current fights over KCI, the platform being given to creatives has been lost in the conversation.

With all the talk about airport concessions for the new single terminal at KCI, news about the building’s large display of local art might have gotten a little lost in the shuffle.

The 19 spots for local artists’ work in the airport were open to those living within 12 Missouri counties and nine Kansas counties, as well as anyone able to prove significant ties to the metro area—such as growing up or going to college here.

Nine more artists from around the world will also have their work on display in other parts of the airport.

All the local art will be housed in the departure lounges in Concourses A and B and has to fit into spaces that are four feet by 20 feet and four inches deep.

Including significant representation from local artists was important to those steering the design of the terminal.

“If we think about what the identity of Kansas City is—sports teams, barbecue, jazz—what we’ve seen since the 1990s and development of the Crossroads area and First Fridays, (is that) art is another way Kansas City has come to define itself. And what better way to help people understand that part of our identity than to display the work of local artists?” says James Martin, public art administrator for Kansas City.

Kansas City artist Kathy Liao is working her personal immigrant experience into her piece, which will involve painting on shaped canvases and inserting a ceramic element into each one. She came to the U.S. from Taiwan in elementary school and has family scattered around the country and the world.

“I think a lot about that limbo space. Leaving Kansas City (through the airport), you’re in this space of limbo. When I see my dad off, we go to the same concession stand, get the same food, go to the same checkpoint, and when the airport proposal came up I really want to speak to that hello and goodbye experience, that ritual of coming and going,” Liao says.

Her proposed piece brings together four canvases of varying shapes showing scenes with the theme of arriving, leaving, and connecting.

“Each panel is like a memory of an experience; they all do come together, but each of them can in some way stand alone as a little anecdote,” Liao says.

The ceramic element is one she found while experimenting with new styles during the pandemic. 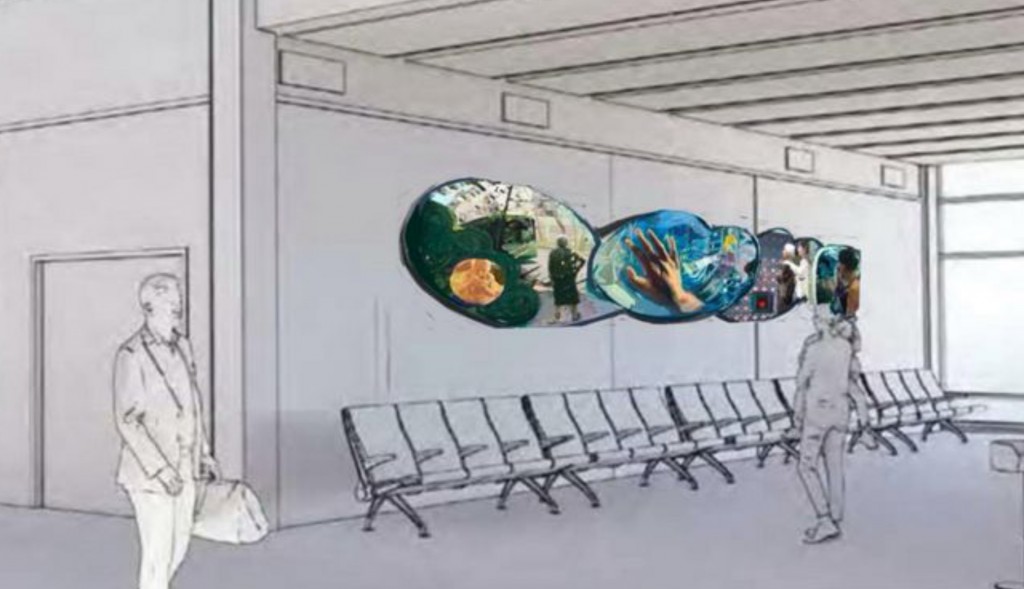 “One of the techniques I employ in my paintings is thinking about the layering of memory or how memory can feel sharp sometimes, and sometimes memory is fragmented. In the decision to incorporate ceramic pieces, I wanted to be able to create a story or theme then have sections where it’s cut out and replaced with ceramic tile, which will be like a fragment of a memory,” she says.

For Shawnee-based fiber artist Debbie Barrett-Jones, figuring out how to present her work in such a space without it breaking down due to its environment was the first challenge. She’ll weave a piece, then take photos of it and have those printed on metal sheets so that it can withstand the high traffic of the airport.

Her proposed work has a woven pattern on one side and bare warp—the strings into which one weaves—on the other side. The photos will show both.

Also important was having a color gradation. Although some details are still up in the air, she’s thinking about having the colors represent the different seasons. 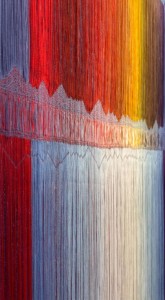 “I really like any kind of art serving a purpose to help with stress, not only the making of it but the viewing of it. Definitely, this aspect of the color gradation that will happen from right to left with the piece will be soothing to the eye,” Barrett-Jones says.

Having the opportunity to participate in the airport project as a fiber artist was a big deal for her.

“To be able to showcase textile art in that way would be such an honor,” she says.

Right now, all the artists are still in the concept stage, and details about any of the works could change before the deadline next fall.

Martin stressed that having a diverse group of artists contributing was very important to the selection panels. He said about three-quarters of the 28 artists selected for the terminal are people of color and/or women.