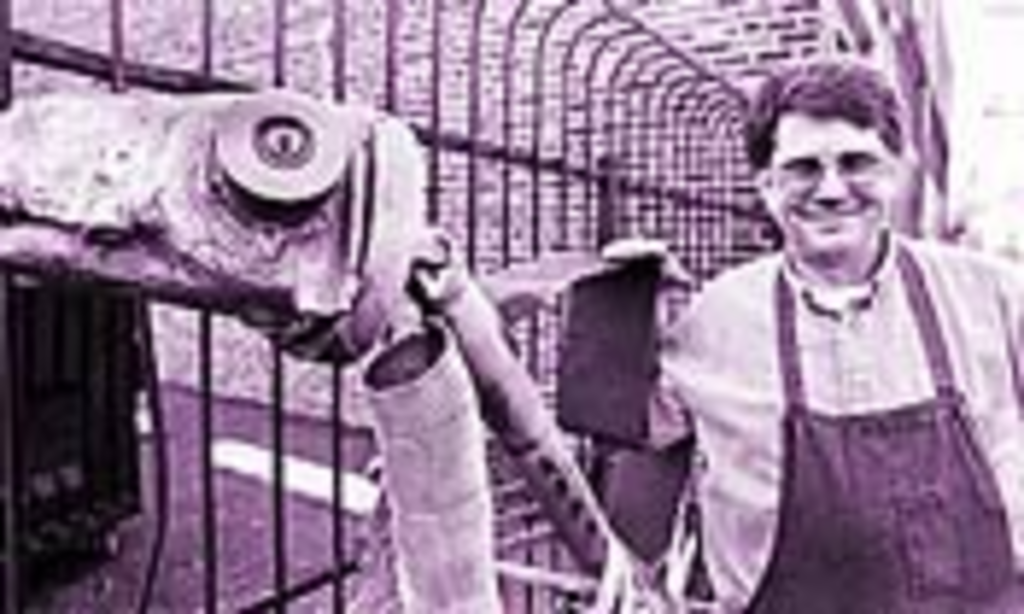 Stepping into Richard Anderson’s office causes momentary confusion. There’s a lack of art. Being as it’s the office of a Kansas City Art Institute professor, that’s not what one would expect. But there’s an air of scholarship even though Anderson doesn’t come across as a run-of-the-mill anthropologist. His pierced ear and easy mannerisms crack the wall most professors build to maintain a sense of intellectual superiority.

“Anthropology is kind of a half-assed science,” he says, laughing. “It’s not like sociology, where you get a random sample of 1,000 people to represent all the range of variation out there. You just can’t do that in anthropology.”

“How would you feel if your car radio broke?” Anderson asks.

“A lot of people would get it fixed real fast,” he answers without a pause. “They might know that the tires are wearing down, and that may be dangerous, but they fix the radio. I know I would. You gotta have music.” That fact, Anderson says, proves how important art is in ordinary Americans’ day-to-day lives. Most Americans are so inundated with popular art on a daily basis that they can’t see the metaphorical forest.

Anderson set out to discover the extent of art in American life while writing American Muse: Anthropological Excursions into Art and Aesthetics, which was recently published by the Prentice Hall Publishing Co. For his research into the hows and whys behind popular art, Anderson found plenty of subjects in the Kansas City area. He interviewed 64 artists with interests ranging from tattoos and body piercing to topless dancing and car repair.

“I call it the snowball method,” he says of his research methods. “It’s got some disadvantages because you limit yourself to a fairly small circle of people.” But Anderson is confident that his findings are true throughout the population. “Sixty-four people is where it ended up,” he says. “But it started with one.”

In his earlier book, Calliope’s Sisters, Anderson posited that art in America wasn’t really very important. Anderson’s about-face came after he decided to let the popular arts crash the snooty, black-tie image the fine arts have cultivated for decades. “The fine arts have gotten what they asked for in the 20th century. They tried to be inaccessible,” he says. “Until the ’80s and ’90s, a lot of the art was really remote, and you could only appreciate it if you studied long and hard.”

Today, museums struggle to interest people, while the masses flock to buy the latest Britney Spears or Ricky Martin album. “Now, we are at the point where fine arts are kind of in jeopardy — I don’t want to say extinction, I don’t want to overstate the case here — but they’ve gotten so remote that they don’t matter much anymore,” says Anderson. “If you could make the fine arts disappear, a lot of people wouldn’t miss ’em. They’d say, ‘Well, that building across the street, The Nelson(-Atkins Museum), they had something in there, what was in that building?’ They don’t go in. They don’t see the works in there. A few people consider it extremely important, but most people don’t.”

However, Anderson is careful not to break down the wall between popular and fine arts entirely. “I’m not ignoring the difference between fine art and popular art. I know they are different types of things, just like drama and dance are different kinds of things. But they have a lot in common too. Popular art and fine art are very important in our lives. They both have really interesting philosophical underpinnings. There’s interesting theory in there,” he says.

Popular arts are beginning to encroach upon the fine arts’ coveted territory, Anderson says. “I think the dividing line between popular art and fine art started to come down in the ’60s. People started to give more serious consideration to the popular arts and say, ‘There’s some interesting issues here.'”

Two people Anderson interviewed for his research, Chief Korzinowski and Katrina Oldenberg, have made the front yard of their East Bottoms home into a sort of gallery for industrial-installation art pieces. The yard is cluttered with cast-off archaic industrial tools and equipment scattered about in an orderly, if hodgepodge, fashion, making the yard look like an outdoor art gallery of sorts.

However, Korzinowski has no formal training in the fine arts. Nevertheless, the couple look on the collection as art, says Oldenberg. Without the sophisticated air that surrounds what is commonly considered art, the couple are free to collect and display their treasures with a freedom for which most fine artists yearn. “He just does it because he likes it,” Oldenberg says.

The collection is not void of historical context or meaning, however. “The other reason (for displaying the collection) is because a lot of kids in this neighborhood don’t know what a tobacco planter is,” she adds. “He (Korzinowski) figured it was kind of history for the kids.”

Oldenberg downplays the importance of what is traditionally called art in their daily life. The couple do not make a habit of standing in stuffy galleries staring at odd objects with obscene price tags. “We don’t go to museums, we go to auctions,” Oldenberg says with a chuckle. “Like this weekend, you know what he’s going to do? He’s going to an auction to see about a wooden corn planter. He’s going to an auction just to see what it will run.”

Another example of overlooked artistry is that of Dick Jobe, owner of Downtown Import Service on Gillham Road. Jobe has become such an accomplished mechanic that some, including Anderson, consider him an artist.

Jobe doesn’t believe the medium defines the artist. “There are lots of art forms,” he says, “and I believe that just because a person isn’t trained in the classical arts doesn’t mean that he can’t be an artist at what he does.

However, not every person can be an artist at what he or she does, according to Jobe. “There’s a lot of people that don’t have the feel for it. I’m saying that people with artistic talent and abilities can be artists without formal training.”

Jobe has become so good at making all those wiggly parts move up and down that he has shifted his focus out of the Volvo repair business and into a purely artistic business called Machine Head. The new business allows Jobe’s artistic side to become apparent in the art metal work he does. He is working on a conference table for MMG Worldwide and on various custom design and fabrication projects.

Anderson found that the difference between an artist’s showing his or her work at the Kemper Museum of Contemporary Art and a fine craftsman can be vague and undefined to say the least. “The first thing you realize is there’s no dividing line (between fine and popular art),” he says. “There’s a gray area. What I see is the audience. The fine arts tend to be geared toward people with more wealth, which also means more formal education — they’ve taken music appreciation classes in school, they can afford to buy paintings.

“It’s also probably true that the people that make (fine art), on average, are trained a lot longer. It’s harder to master a violin than a kazoo.”

But if both the mechanic and the oil painter can be considered under the same heading as artists, have art schools and formal training become obsolete?

“It seems impossible to understand talent without calling in some sort of inborn ability,” says Anderson, “whether it’s genetic or God-given or however you account for it. Some people just seem to have it. At the same time, there’s no question that if you don’t get a chance to develop it — if you’re not around an environment that encourages it — the odds are against your really getting involved in it.”