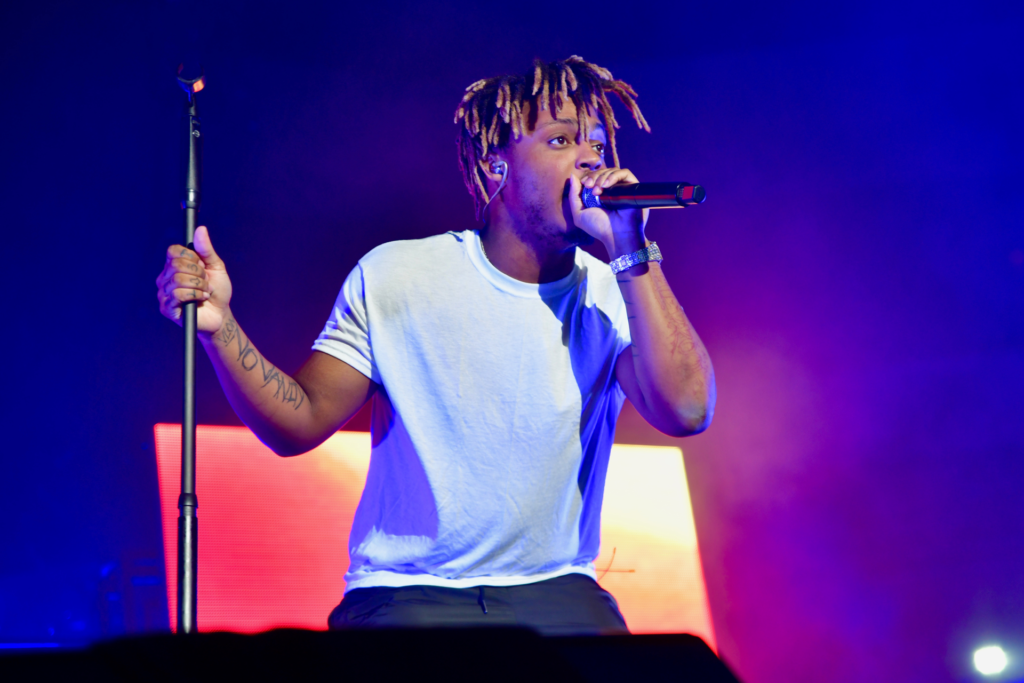 Moments after the final song from Chicago rapper Juice Wrld on Sunday night at the Silverstein Eye Centers Arena, Juice’s swaggering DJ, Mike P, announced that Juice (born Jarad Higgins) had lost his father just two hours before the show. Juice then spoke briefly about persevering and achieving your goals before closing out his time onstage by encouraging fans to tell their doubters to:

Well, hey: The mourning process is complex, and two hours is no time at all to process the death of a parent. And, looking back, the tragic circumstances made Juice’s performance a bit more impressive, assuming you’re willing to look past his peculiar speech at the end there (few of the thousands of teens and young adults in the crowd seemed to take any issue with it).

Juice has been living inside a personal and professional whirlwind for the last 18 months. After emerging in late 2017, his first two songs distributed via Interscope Records — “Lucid Dreams” and “All Girls Are The Same” — quickly became massive hits on the major streaming platforms. His current tour, named after his sophomore album released earlier this year, Death Race For Love, pulls much of its imagery from the action movie franchise, you guessed it, Death Race. A glowing-red pair of eyes appeared on screen a few times during Sunday night’s show while an evil voice taunted Juice and his fans. Heavy-handed as much of the execution of Juice’s music and this tour production is, it adds up to a fascinating a portrait of today’s American adolescent.

The music: mostly a simple but effective recipe of emotive guitar licks and booming, trap-style drums, which Juice warbles and raps alongside in auto-tune. (A similar combo was utilized by the late Lil Peep, whom Juice briefly memorialized during his song “Legends.”) Accompanied by a rock band hidden behind video boards, a towering cup of lean, and armed truck and muscle car props, Juice gripped the microphone like a Gen-Z Joel Madden and bounced around like an Instagram-famous Tom DeLonge. His worldview zoomed into focus: heartbreak and drug problems in the passenger seat, and apocalyptic, societal collapse gaining on him in the rearview. (Modern life is kinda like the first act of a shitty action movie.)

Many of Juice’s songs have demonstrated the popular 2000s emo and pop-punk lyrical tropes of the jealous ex-boyfriend, which he occasionally takes to theatrical new heights. It’s her body or nobody, I refuse to compromise / So if she leaves, I’ma kill her, oh, she’ll die, he sings on “Fine China,” a single from his joint album with trap heavyweight Future. It can be painful to observe angsty youths connecting with these kinds of lyrics or — as I did on Sunday — watch a group of four teenagers hear these words while gleefully hopping up and down and grabbing each other by the arms before coordinating a sloppy, collaborative hitting of the woah. 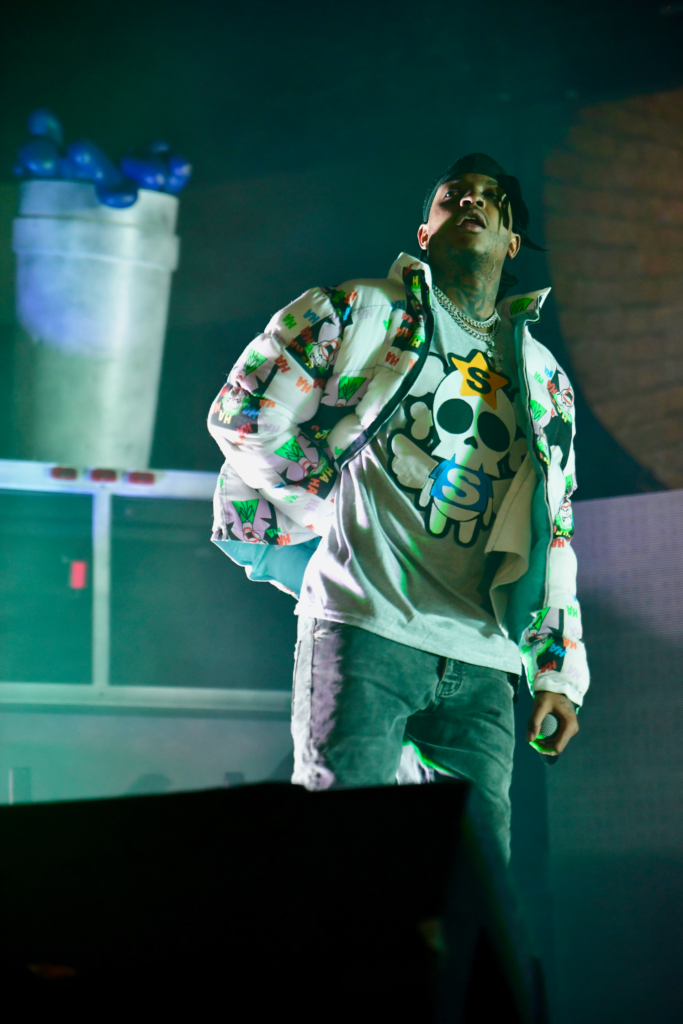 Following the first half-hour of Juice’s performance, South Florida rapper Ski Mask The Slump God emerged for his supporting set. Ski Mask’s violent raps pack a heavier punch at their softest than any of Juice’s material does at its most aggressive. An electric, nu-metal kind of energy rose inside the arena as Ski Mask supplied tongue-twister rhymes and raspy screams, incited mosh pits, and paid tribute to his late friend and close collaborator Xxxtentacion, crossing his arms over his head. Without this mid-show adrenaline boost, the latter half of Juice’s set would have grown stale at a much faster rate. He saved some of his most popular songs until the final stretch, but Juice’s lyrics rival only Post Malone’s in relatable pop-rap vacuity, and that fact became more and more apparent over the course of his performance. 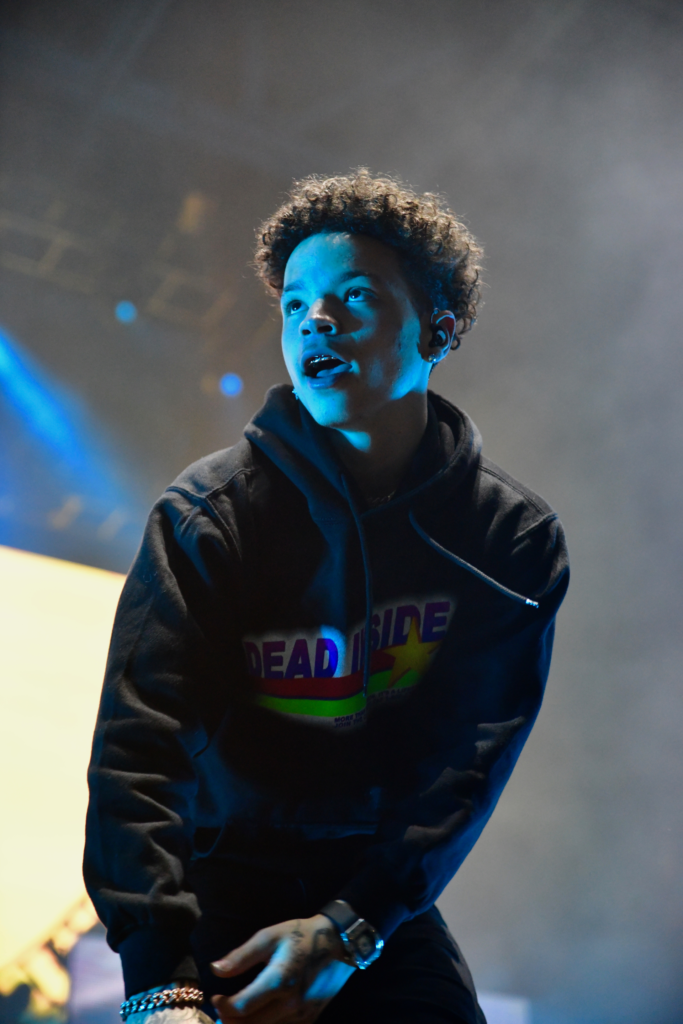 Linked to the show’s other two performers by his work with celebrity video director Cole Bennett, the 17-year-old Seattle rapper Lil Mosey opened the show with a 25-minute set. Mosey was in far better spirits than his recent appearance at Flyover in Bonner Springs, which ended in a minor tantrum due to a lack of crowd participation. Aside from two (2) performances of his single “Noticed,” — it opened and closed the set — most of Mosey’s performance passed without much event.