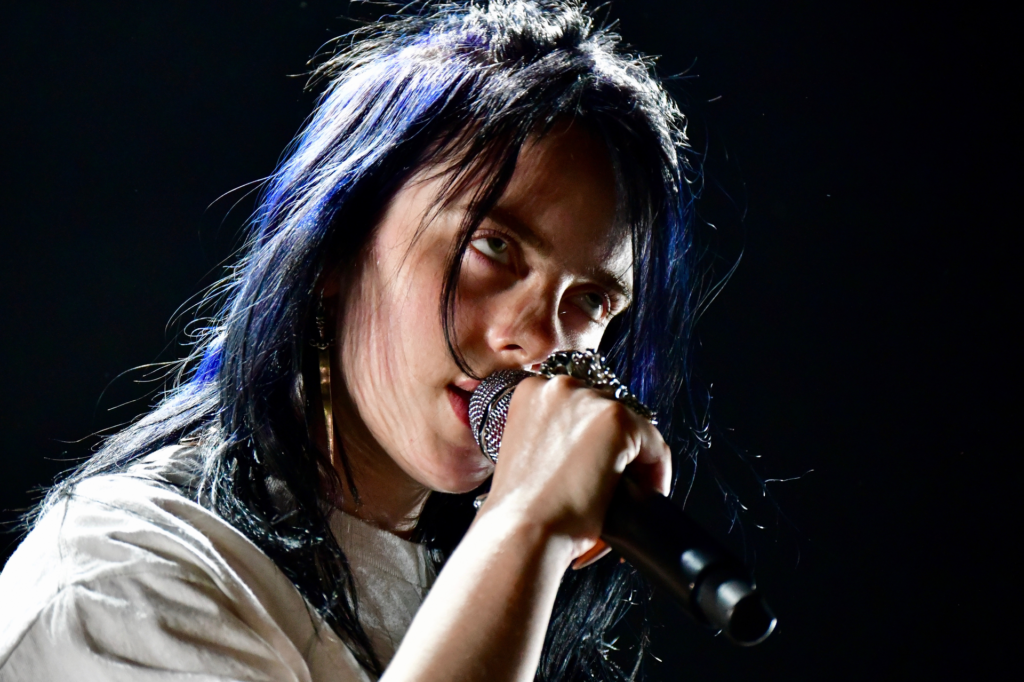 As Friday night’s sold-out crowd filtered into Silverstein Eye Centers Arena, I overheard one security guard tell another that the show “can’t be any crazier than Slayer.” And while it’s true that the headliner — California teen-pop superstar Billie Eilish — didn’t generate any circle pits, the number of fans that had to be heaved over the barricade and rescued from dehydration definitely rivaled that of an arena metal gig.

Born Billie Eilish Pirate Baird O’Connell, Eilish, 17, in March became the first artist born after the year 2000 to top the charts, with her debut album, When We All Fall Asleep, Where Do We Go? Friday’s show made clear that Eilish is the real deal: either the hardest-working minor in music, a natural-born performer, or some combination of the two.

On Friday, in Independence, a spooky, Burtonesque animation of Eilish played on sprawling video screens as Finneas O’Connell (Billie’s brother, producer, and live keyboardist and guitarist) and drummer Andrew Marshall stepped onto the stage. Eilish appeared draped in baggy, high-end streetwear, and the screams of thousands of teenage and pre-teen fans filled the room. Her neon-green merchandise made it easy to pick out each section’s superfans, several of whom shrieked things like, “I love you, Billie!” between every song.

Eilish’s show came five days after a Sunday outing by Chicago emo rapper Juice Wrld at the same venue, and while most major label subsidiaries lack any real identity in 2019, it makes sense that both Eilish and Juice share one in Interscope. Jimmy Iovine hasn’t been involved with the label in five years, but Eilish and Juice — two young artists with dark aesthetics — seems to be an echo of the label’s 90s roster, which was unafraid of controversy and eager to make household names of Marilyn Manson and Nine Inch Nails, or make a distribution deal with Death Row Records.

Much as at Sunday’s show, Generation Z’s post-genre approach to making music was front and center. Eilish opened with When We All Fall Asleep’s first track, “Bad Guy,” a bass-thumping, anti-hero pop song complete with bubbling EDM dance breaks and a cold, post-Yeezus industrial hip-hop outro. (Eilish has cited Tyler, The Creator as an influence on her work, and the grimy sonic aesthetics and ghoulish characters projected onto the stage screen would have made sense to anyone who’s listened to Goblin.) 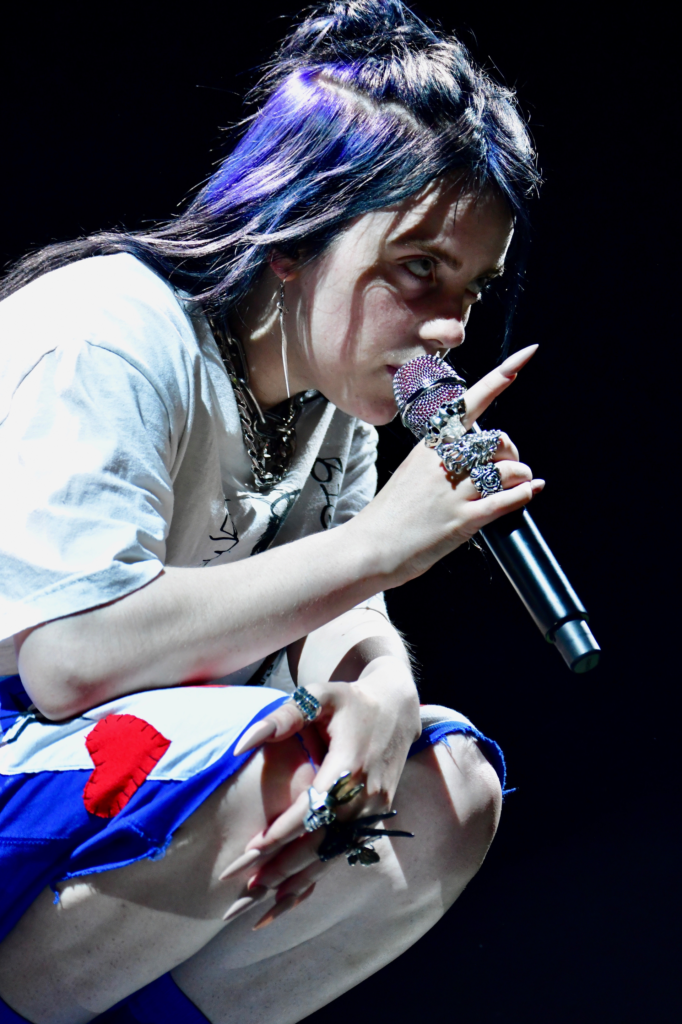 One popular critique of Eilish’s music has been its tendency to veer into what some have termed “Spotifycore,” a style characterized by a blending of pop, electronic, and hip-hop into digestible, mid-paced, playlist-friendly songs. A decent chunk of Eilish’s material from both her debut EP Don’t Smile At Me and When We All Fall Asleep fits the criteria, but it can be argued that she executes the sound in a more excusable way than most, particularly on songs like “My Strange Addiction” and “All The Good Girls Go To Hell,” which hold more artistic depth than most of the EP material (her debut single, “Ocean Eyes,” was a gorgeous vocal moment that demonstrated her affinity for Lana Del Rey, but hardly stands up to the work that’s followed). These types of tracks also helped steady the crowd’s energy before Eilish delivered gripping numbers like the action-packed romp “You Should See Me In A Crown.”

A responsible adult unfamiliar with the music of Juice Wrld may have left Sunday’s concert with an uneasy feeling about today’s teenagers, but drop that same oldster at the Billie show and their *cringe* faith in humanity may well have been restored. Eilish revealed in an interview that “Wish You Were Gay” is about selfishly wishing the boy she was rejected by was gay so she wouldn’t have to see him with any other girls; but the lyrics are still ambiguous enough for a lovelorn gay teenager to connect with them. Judging by the extremely passionate sing-along that happened here, that was the case (unless a ton of teens in the crowd were just super heartbroken in general — certainly a possibility). There was also “Xanny,” the whispery, anthemic slow-burner about abstaining from (or at least being cautious with) drugs, likely beloved by Truth representatives and D.A.R.E. officers worldwide.

The show’s emotional climax, “I Love You,” saw the O’Connell siblings sitting criss-cross on a bed — Eilish said that’s how the song was written at their home — as it was hoisted above the stage and the screen behind them twinkled with stars and clouds. The show ended with a performance of the anxiety-ridden “Bury A Friend” that felt completely celebratory despite its morbid themes. Fans shouted the final line of the song (which the album is named after) in unison and put the momentous gig to rest. Don’t be surprised when she plays Sprint Center next time. 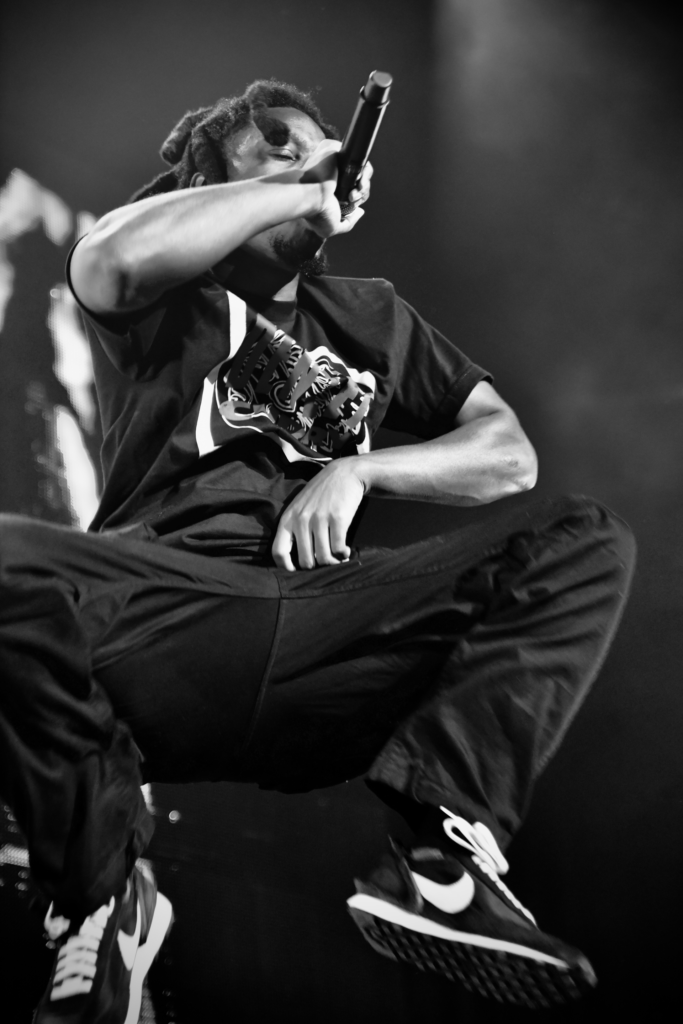 South Florida rapper Denzel Curry has provided direct support on most of Eilish’s recent dates. Much like Danny Brown and Vince Staples opening for Gorillaz at Sprint Center last year, this performance felt like a young rap star getting a hard-earned moment in the spotlight. Curry painted vibrant, sunset-hued portraits of his upbringing on cuts from Zuu, released just a week ago. Tracks from last year’s Ta13oo saw Curry taking the grim, Three 6-inspired trunk rattlers he made in his early days to theatrical new heights (though he seemed to have run out of breath by the time he made it to his biting, music-industry takedown banger “Clout Cobain”).

Like Ski Mask The Slump God on Sunday, Curry paid tribute to the late rapper Xxxtentacion with a cover of his signature “Look At Me!” Young fans cheered on Curry’s machine gun flows as if they were guitar solos on his viral hit and set-closer, “Ultimate.” For many of those young fans, this was likely their very first concert, and in a way I feel sorry for them, because a lot of the future rap sets they attend are unlikely to be as good as Curry’s.