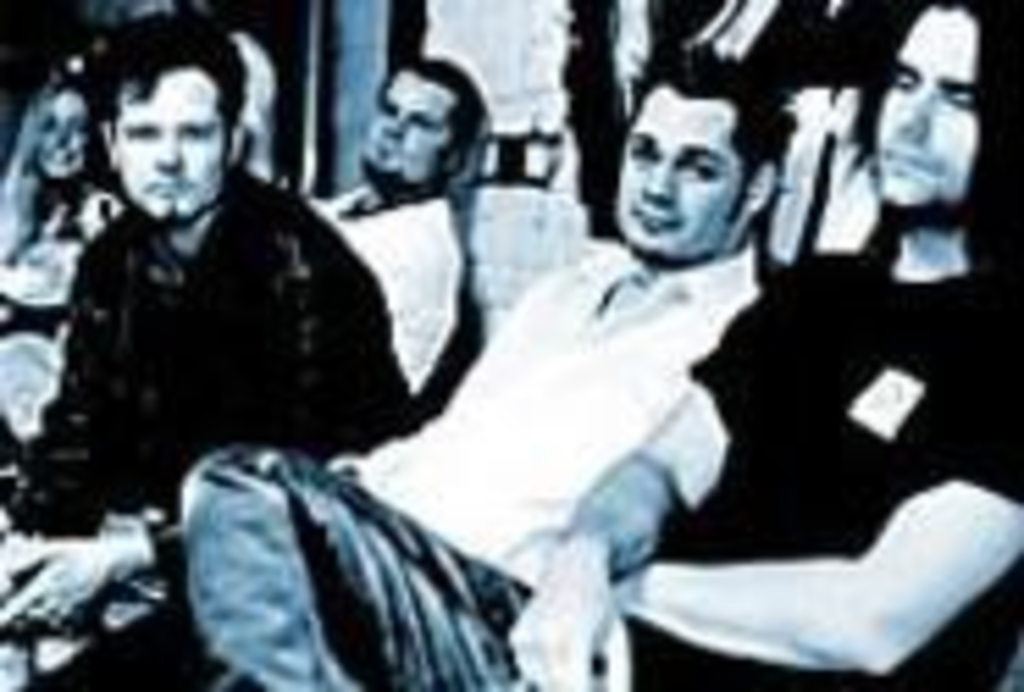 All David George wants for Christmas is a new transmission, a new contract, and new copies of his band Moaning Lisa‘s 2000 release, Wonderful, to sell at shows. He’d like it if his rhythm section remained unchanged for a while, he’d like a trailer to haul gear behind his van, and he’d like a more supportive local scene. But all he has right now is a cup of coffee and some time to kill.

“We’re hoping that after the show Friday night at The Hurricane, we can get the van fixed,” George says. He recently endured the struggling rocker’s trifecta in record time: He spent the night in jail, had his van stolen in front of him, and got the vehicle back in undrivable condition. But the band’s name isn’t “Moaning David,” so he keeps his complaining to a dumbfounded minimum.

“It started when I got pulled over coming home from a gig in St. Joseph,” George says. “I thought I had a clean record, but when I got pulled over, they discovered that I’d failed to appear in court for an expired-tags ticket, so the Gladstone police took me in for eight hours in a 30-degree cell in just a T-shirt. If my girlfriend and my sister hadn’t bailed me out, I might have ended up in lockup for a week waiting for arraignment.”

And yes, for those wondering, the patient girlfriend coming to the aid of Gladstone’s Public Enemy No. 1 was still the blonde woman pictured naked on the cover of Wonderful.

“We broke up a few months after that picture was taken but got back together later. It did make me think — I’ve got this picture of her on my album for the rest of my life,” George says.

The other woman in George’s life he wishes had been captured on film — or just captured — is the one who stole his van last month. “She came up to me outside the Velvet Dog and asked me for a ride,” he recalls. “I said no. I was talking to the door guy at the bar, and she quietly jumped in, put it in gear, and floored it.” The police recovered the van a week later, stripped of its contents and its transmission. “Some homeless guy had been sleeping in it, and my phone, address book, and PA were gone. It was lovely.”

George and the band had been saving to buy a trailer for their equipment to make their commutes through the Midwest more comfortable. That ambition has been put on the back burner so the transmission can be replaced, though Moaning Lisa will head out in February or March for a mini-tour that will start in Nashville.

“The writing is going great right now,” George says. “The new songs are more rock. This stuff is more guitar-heavy. We were on the pop side, but we have two guys in the band who are kind of metalheads into Danzig and Thin Lizzy and Mötley Crüe, that old ’80s metal, so it kind of gets infused when we jam or write.”

Moaning Lisa guitarist Desmond Ramos agrees. “We’re trying to get that sex, drugs, and rock and roll thing going,” he says with a low rumbling laugh, playing Slash to George’s … well, playing Slash. “I come from the old school of rock,” says the 25-year-old musician who, with George, founded the band. “People have forgotten the ‘rock’ of ‘rock and roll.’ Looking at your toes while you’re playing is not putting on a show. It’s about being aggressive and fuckin’ hating your parents and the government.

“David’s collection is, like, The Beatles, some Foo Fighters, and some pretty lightweight, midtempo stuff. Maybe he’s getting too old,” jokes Ramos. “Our bass player (Craig Hill) is on my side. He’s from Springfield, and he likes that old-school stuff. And our drummer, the other Craig (Haning), digs Rush. He’s more a technical musician who’s played in Star 80 and the Glitter Kicks.”

The band is looking forward, having hired a new manager (Joe Schultz, who used to work for Columbia as a radio rep) and begun playing new material in concert at a 50-50 ratio, with plans to release an album next summer. Ramos says the rhythm section’s revolving door has slowed for now, with a combination he calls the group’s best.

“I heard a rumor that (the band’s label) Veronica is printing new copies of Wonderful,” George says. That would end a stalemate that has left Moaning Lisa with about 15 spare copies of the disc.

“The label has been a pain in the ass,” he continues. “They’re sitting on the album, waiting to see what happens, and we’re sold out of it.”

“It’s all really about writing songs and playing the guitar,” George says, having made an effort to distract himself from the bad current sweeping the band along lately. “Someone associated with one of the clubs told me I wasn’t sincere, and that hurt my feelings. I wouldn’t be doing this if I weren’t sincere about it. I want people to see that I’m having a good time. If I’m singing, I want someone to feel my pain and feel my pleasure. I want someone to see that I’m playing the guitar. So you take these things in stride because people have their opinions, and if you start chasing those opinions, you don’t find out anything about yourself.”