Linda Lighton and Taking Aim are suddenly on target 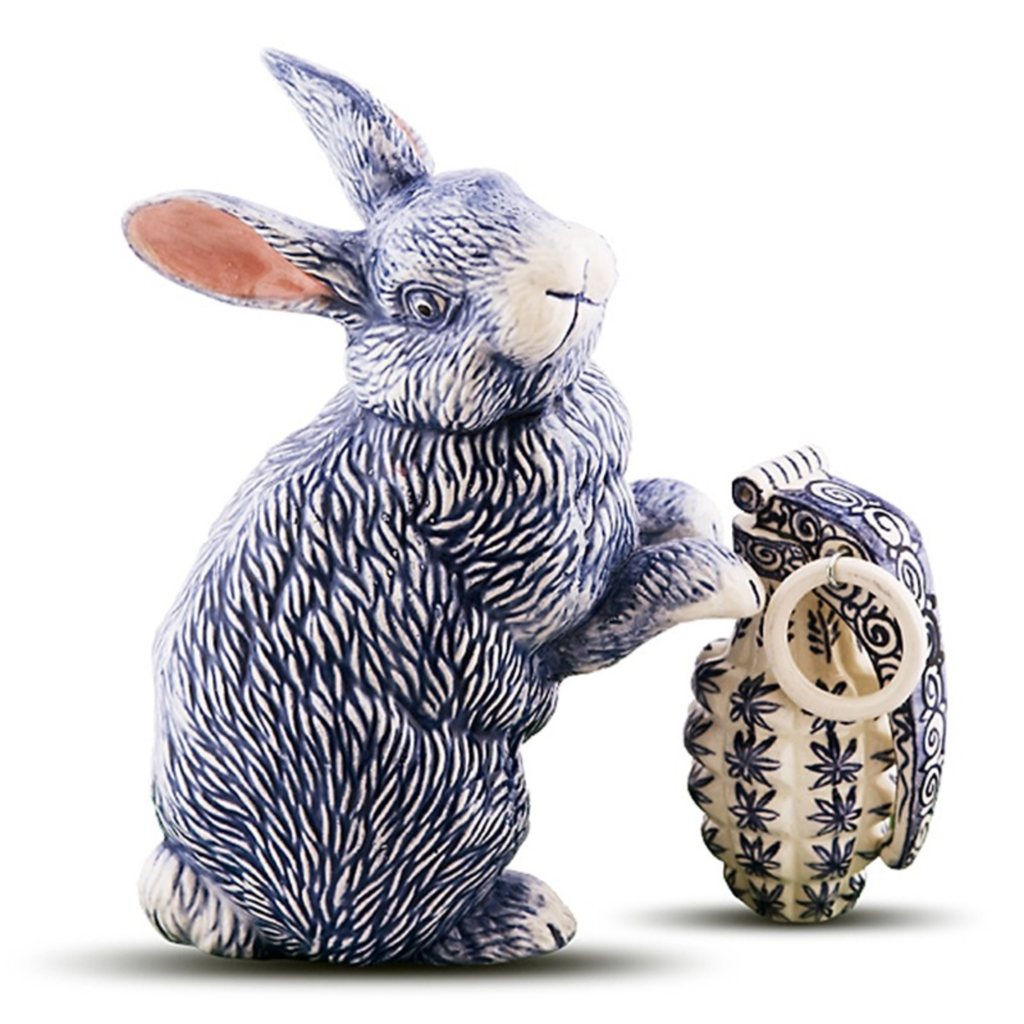 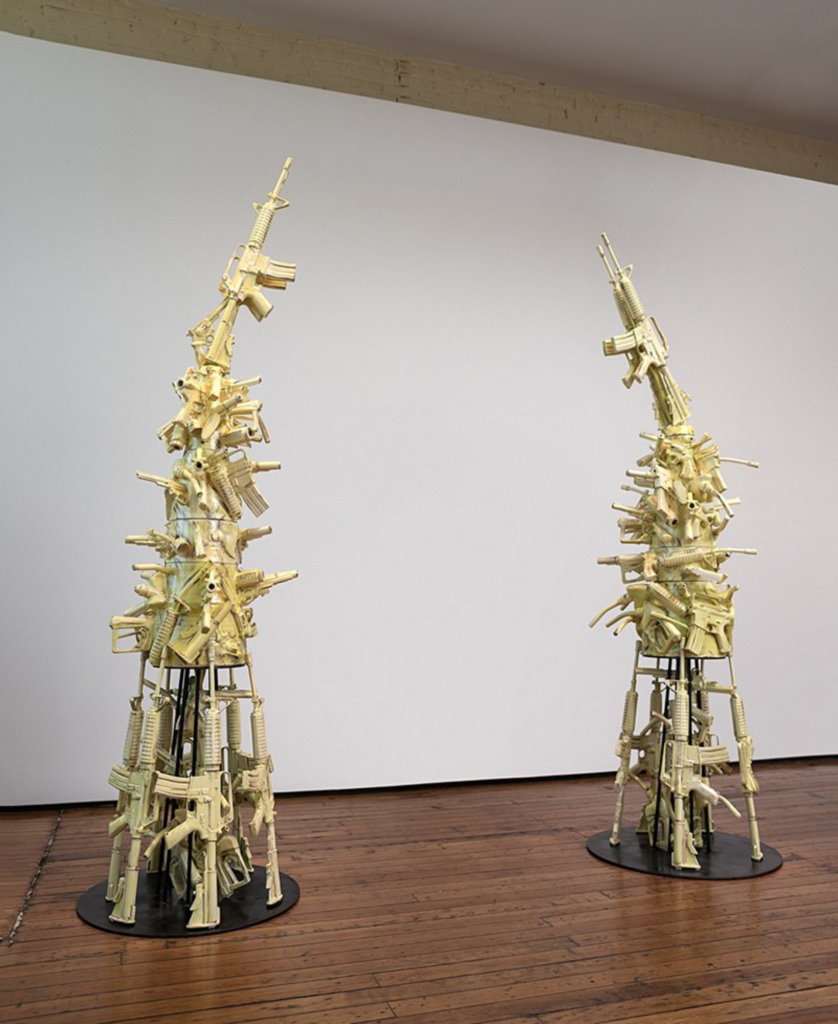 To ceramic artist Linda Lighton, lots of things in this man-made world — emphasis on man — look like penises. Guns and bullets, for sure, but also gas-pump handles, lipstick and even shampoo bottles. There’s nothing especially shocking about this, given that she’s hardly the lone observer of this phenomenon and given that she has been at it for a long time. Pointing out the male slant that drives our culture of competitiveness-over-cooperation has been a decades-long motivation in her art.

Sometimes, though, the culture of destruction — centered, in this country, on the ubiquity of firearms and gun violence — finds some vicious new way to top itself. And sometimes an artist’s recent works are already in sad accord with the moment.

Well before last Friday’s Sandy Hook massacre, Lighton had found herself awakened to the constant threat of random violence. It happened a couple of years ago, at the intersection of Gillham and Linwood, where her husband witnessed a six-person shootout around 8 a.m. She tells me that she wondered, “Is any of this getting reported?” She wanted to know: Does this happen every day? Shouldn’t we talk about it? How can we do it civilly?

In 2010, Kansas City was the fifth most dangerous U.S. city, in terms of firearm deaths. According to Business Insider, it’s still in the top 20 (at No. 16, behind No. 3 St. Louis), sharing in the 1.2 million violent crimes the FBI says were committed in this country in 2011. Guns, the agency reports, were used in 67.7 percent of homicides, 41.3 percent of robberies and 21.2 percent of aggravated assaults.

Since her husband’s encounter, Lighton has accumulated a binder full of local news clippings and statistical studies about gun-related killings, accidents and suicides. Her research is part of Taking Aim, a three-person show at Sherry Leedy Contemporary Art.

She also now carries with her a headful of stories that go beyond data and statistics. In conversation with a small group of people in the gallery one recent weekend, she recounted a handful of grim episodes told to her by others who had survived gun violence or had seen it destroy someone else. A week before Taking Aim opened, somebody shot up an empty parked car outside Lighton’s studio. It was probably random, but everything she has come to understand about this subject feels personal.

Her work is in the first room of the gallery, and if you were to walk in not knowing the artist’s deeply informed feelings (or any of the titles, such as “I Don’t Want a Bullet to Kiss Your Heart”), you might infer that the totems were celebrations of weaponry. Combining cast AK-47s, .44-caliber handguns, and gas-pump handles with wheel-thrown bullets and lipstick tubes, these porcelain growths have a quasi-organic tone while, in most cases, looking rather literal (except for the colors of their glazes). Their surfaces are attention-hungry, lurid and so glossy that they’re almost blinding. Yet each weapon maintains some human mark, a defect of creation — a droop here, a broken bit there. These are no matte-black, factory-machined killing tools.

Lighton invited a couple of other artists to exhibit with her in this show, both of whom were already producing weapons-based work as social commentary. Seattle artist Charles Krafft uses traditional European techniques to decorate slip-cast ceramic weapons and other objects, and Jane Rainwater (of Andover, Connecticut, about an hour northeast of Newtown) has contributed ink-on-paper drawings that look like botanical silhouettes from a distance but are composed of weapons radiating out like sinister mandalas.

Krafft’s “Villa Delirium Delft Works,” only two pieces of which ended up here, are more effective than his realistically painted weapons. (The latter hang on the walls as trophies or in little cases; a set of two firearms on red velvet inside a black box with a glass lid, for example, is titled “Assassin’s Kit.”) The blue-and-white work, on the other hand, offers more detail and interest; a traditional format originally reserved for showing windmill scenes on functional dinnerware is employed here to present “decorative” items such as a pretty canister of anthrax virus.

Rainwater’s drawings have a quiet charm that the 3-D works here do not. She presents firearms as petals, and her knives and scimitars adhere to the symmetrical arrangements that nature has already perfected. She also has mounted-style insects made of weaponry, with clever titles like “Ammophelius Mosquito,” and they work with the rest of the art in Taking Aim to achieve a basic goal of this show: to get us talking.

When Taking Aim opened, people asked Lighton — who for a while now has been writing to elected officials about gun control — whether an artist could effect change through something visual. After December 14, there’s new talk about whether, and how, anyone can change our gun culture. If you’ve spent any time on Facebook or Twitter the past few days, you’ve seen that people are mostly sticking with their old positions, still playing their seemingly unchangeable roles.

That includes artists, who have long protested war, violence and destruction with their work. So nothing in Taking Aim (or in this article about it) is new, but the show is still worth seeing in the days before it ends. It’s worth looking at this art as part of a hard conversation that just got even harder — and seeing whether it feels any different today than it would have only a few days ago.