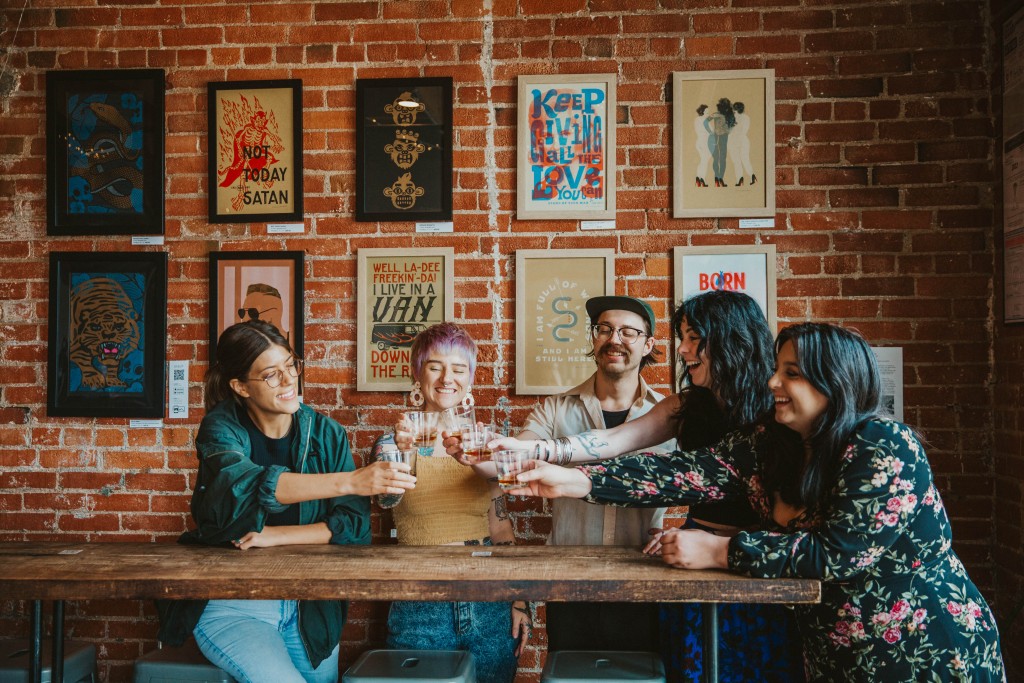 Their big winner was the Supernova Gin, a juicy and explosive navy strength gin that, by unanimous vote, won double gold with 96 points–one of only five gins in the competition to be awarded a double gold medal.

Their Bold Gin, which is layered with rich, dark botanicals, acted as a runner-up and won a gold medal with 95 points.

This isn’t Lifted Spirits’ first big success. Since the distillery’s opening in 2016, its craft quality has only increased.

Their secret? A team of talented and creative professionals that share a curiosity, and a passion for great spirits. “We’re a bunch of spirits nerds. We’re quirky and really dive deep into things,” Owner and CEO Michael Stuckey says. “We take tradition, art, and science and put them all together to make something new.”

Spirits off the beaten path 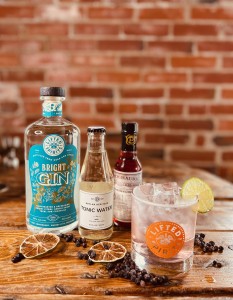 While experimentation certainly goes on inside their production facility, their processes are intentional. “When we want to use a new ingredient, we use a standard set of tests—we’re methodical in the way we approach our art,” says Stuckey. “We’re able to take those artistic, intuitive leaps but still use a scientific mindset to narrow down flavor profiles and specific botanicals.”

With up to five different gins available in their lineup at any given time, the distillers are serious about maintaining some tradition. But, you’ll be hard pressed to find a London Dry within their walls.

Their gin selection is heavy with flavorful botanicals, and they’re on the cusp of releasing their third barrel-aged gin project, Barrel Reserve No. 3. Stuckey stressed the importance of producing a variety of different gins. “Having multiple kinds of gin—we’re showing people that you can open things up to have new experiences.”

Aside from Lifted Spirits’ three flagship botanical gins, the distillery is known to experiment with other uncommon spirits. They currently offer a wheat whiskey—legally defined as a whiskey distilled from at least 51% wheat, but Lifted Spirits elects to create theirs with 100% wheat.

It’s notoriously difficult to get a drinkable whiskey this way, but Lifted Spirits’ Wheat Whiskey is toasty and warm with a delicious, smooth finish.

Perhaps their most curious offering, yet, is the Absinthe Verte. Lifted Spirits’ absinthe was the first absinthe to be distilled in Kansas City, and it’s made from Stuckey’s own recipe. “It’s real absinthe, based very much in the tradition of French absinthe,” Stuckey says. “It’s a new recipe that I came up with. It was a real pain in the ass, but worth it.”

Lifted Spirits’ absinthe boasts the spirit’s iconic green coloring. It is distilled from wormwood, with strong notes of anise, fennel, and mint, among other things. For Stuckey, releasing absinthe was an important way to share his love of spirits. “Absinthe is very complex and delicate. One of my favorite things in the world is hanging out with my friends and sipping absinthe,” Stuckey says. 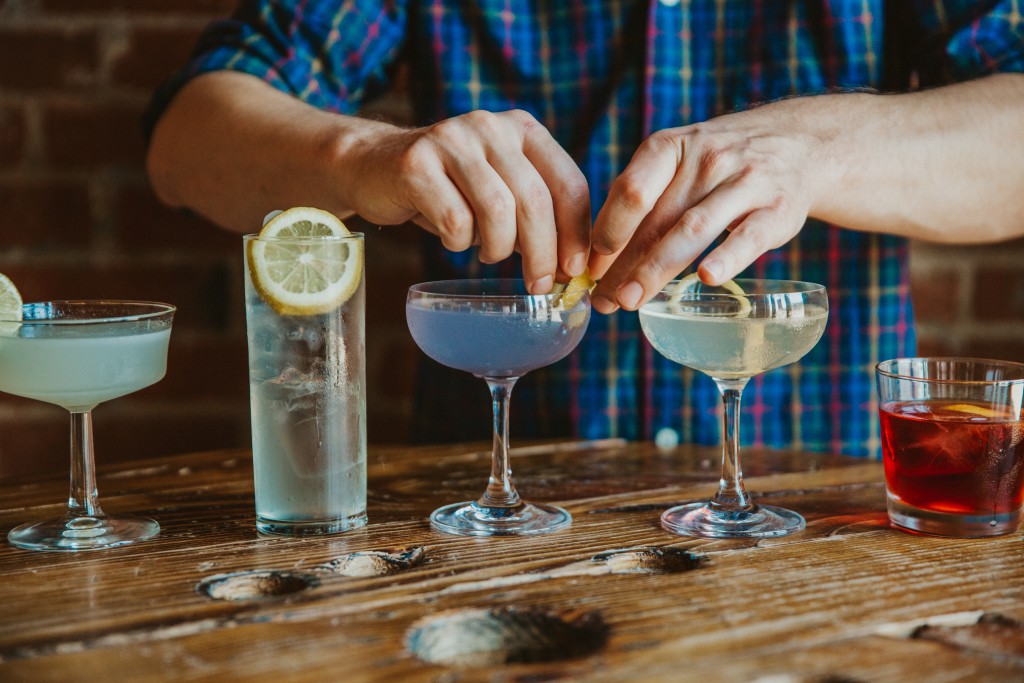 For Stuckey, the purpose behind Lifted Spirits lies in its name. “Honestly, we’re named Lifted Spirits because that’s what we want to do, and we’re really good at it,” he says.

Their main goal is to inspire people through their spirits and to create positive experiences and happy memories. “If Calvin and Hobbes had a distillery, it would be kind of like this. We want to encourage people to have fun and explore,” Stuckey continues.

For Stuckey, the distillery’s international success is just a cherry on top. “It’s not necessary, but it’s rewarding to have the awards coming in on our spirits,” he explains. “It’s great to see that what we’re creating is resonating with people.”

As was the case with many local businesses, the COVID-19 pandemic greatly affected Lifted Spirits. They were forced to shut down their tasting room, and temporarily move to a curbside-only business model.

Fortunately, the distillery was able to take these changes in stride. “The pandemic hit hard, but we had a good core group of supporters when we were doing curbside,” Stuckey says. Through the help of donations, Lifted Spirits was able to produce sanitizer in bulk, and distribute it around the city.

Aside from helping the community, the distillery took advantage of the shutdown to focus on production and make some key changes. “We took the slowness of the pandemic to do multiple projects,” Stuckey comments. “We did a full rebrand in October of 2020 to something that better encapsulates who we are.”

This rebranding included major cosmetic changes to their bottle design, to better encapsulate the creativity and passion that drives Lifted Spirits’ team.

“Beforehand, our branding was a lot of text, focused on the ingredients in the spirit—the wheat we used, this story of who I was before being a distiller—but it didn’t represent Lifted Spirits as a group,” Stuckey says. “The rebrand was about bringing all those ingredients to the forefront. On the labels, illustrations that show more of what’s in the spirit, the fun nature of what we do—that we actually want to lift spirits, more so than just create an alcoholic beverage.” 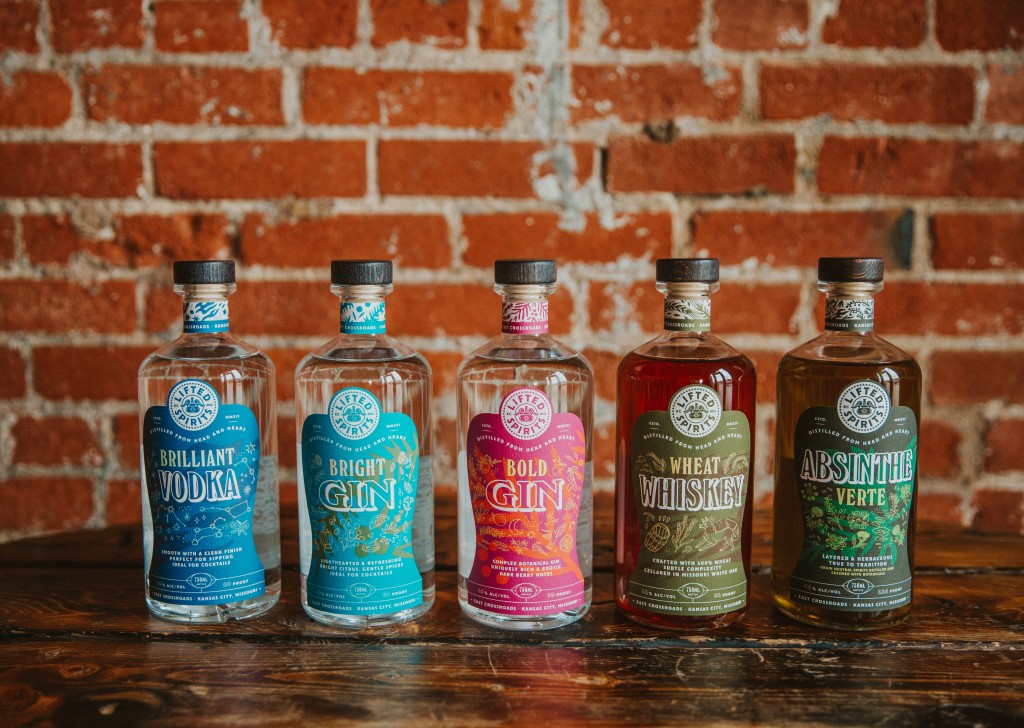 The women behind the cocktails

You can’t tell the story of Lifted Spirits without mentioning their tasting room. This is where guests can sample the distillery’s products, either on their own, or mixed into craft cocktails.

The interior of the tasting room matches the overall botanical theme–the back wall of the bar is painted a vibrant teal and garnished with lush greenery. Opposite the bar, the exposed brick exterior wall features the eclectic work of local artists.

The tasting room’s head bartender, Sage Monet, designs and prepares the entire menu of original cocktails, which feature the distillery’s own spirits. When asked to describe the tasting room, Monet says, “The vibe we’re going for is artistic. It’s like a tiny craft cocktail gallery with hints of vintage chic.” She adds, “It’s important to note that we’re a female-led bar. Our general manager, lead server, and lead bartender are all female, which you don’t see a lot in this industry.”

General manager Molly McGovern says, “It’s a great place for people to grow. We have a lot of freedom and creativity here.”

The tasting room’s Summer 2022 menu features original cocktails like the Strawberry Fields: A strawberry and vanilla-flavored white negroni; McGregor’s Garden: Made with carrot-infused vodka, blueberry, and ginger; and the Cereal Killer: A milk punch made with Fruity Pebble cereal milk.

While there wasn’t a lot Stuckey could share about Lifted Spirits’ plans moving forward, he was able to say that the distillery is close to expanding its distribution into several new states.

Reflecting back on the journey of creating and growing the business, Stuckey explains, “I’ve grown and changed so much in learning about spirits, distilling, and the service industry. I didn’t expect Lifted to be as awesome as it is. I didn’t have the capacity then to understand how cool it could be.”

Upon wrapping up, he adds, “Everything we do is only possible because of the team we have. Lifted would not be nearly as fantastic as it is without Derek—our COO, or Joe—our production manager. I could list the whole team. It’s people that make it different.”