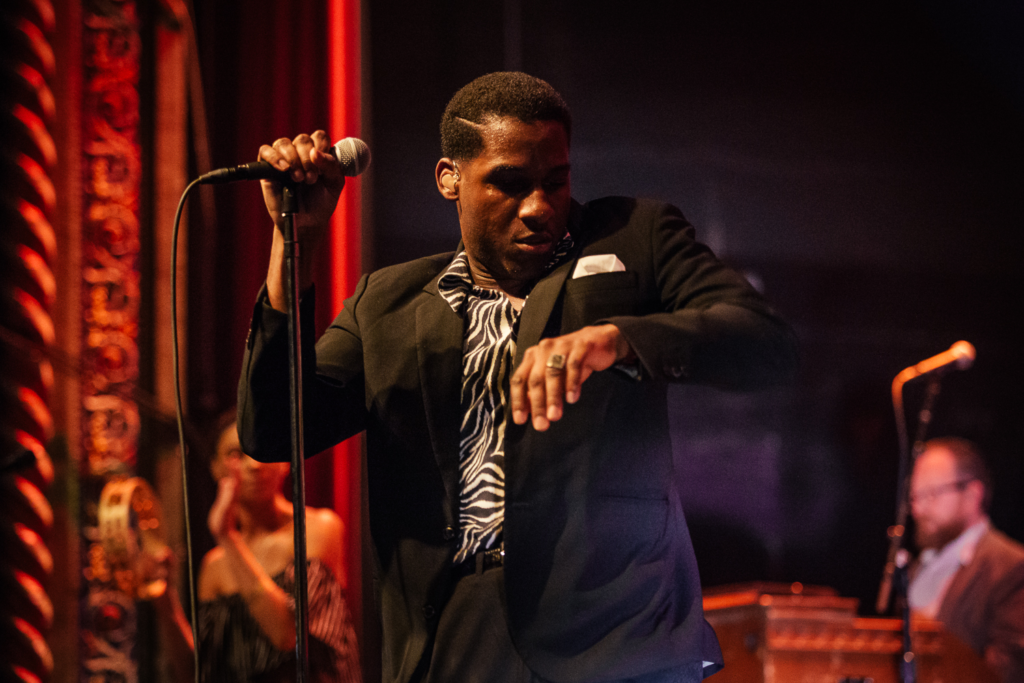 The Uptown filled up early for last night’s long-anticipated Lianne La Havas and Leon Bridges show. By the time La Havas took the stage, at 8 p.m., the floor had filled almost shoulder-to-shoulder, and the space only got tighter for the remainder of the sold-out event. Both artists played to personal strengths and utilized the energy of the crowd — La Havas bringing contemporary soul and Bridges delivering a classic, nostalgic version — to yield a satisfying few hours to a bulging Uptown. 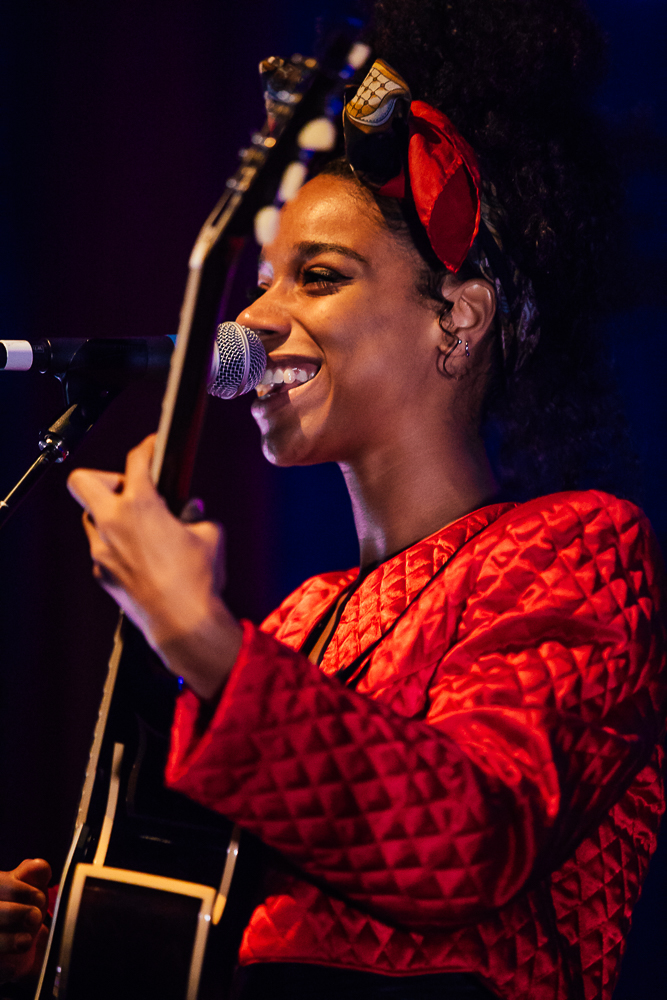 La Havas began her set unaccompanied, wooing the audience with her South London accent and charming banter before playing “Age,” a clever riff on a flirtation with an older man: So is it such a problem if he’s old? As long as he does whatever he’s told. Smiling as she sang, lightly plucking her guitar in what resembled a bossa nova style, she gripped the audience immediately and didn’t let go through a nine-song set that drew from her two albums.

La Havas is a unique talent, noticed even by the late Prince, who once played a private concert for her in her London living room and later included her vocals on 2014’s Art Official Age. Vocally, she most closely resembles Alicia Keys; stylistically, she brings to mind her fellow Brit Corinne Bailey Rae. Following her first song, she was accompanied by a full band, which filled out her sound yet didn’t distract from her at all. She is a performer who is impossible to look away from, and she feels like a fully realized artist — more so than Bridges, whom she outshined last night. 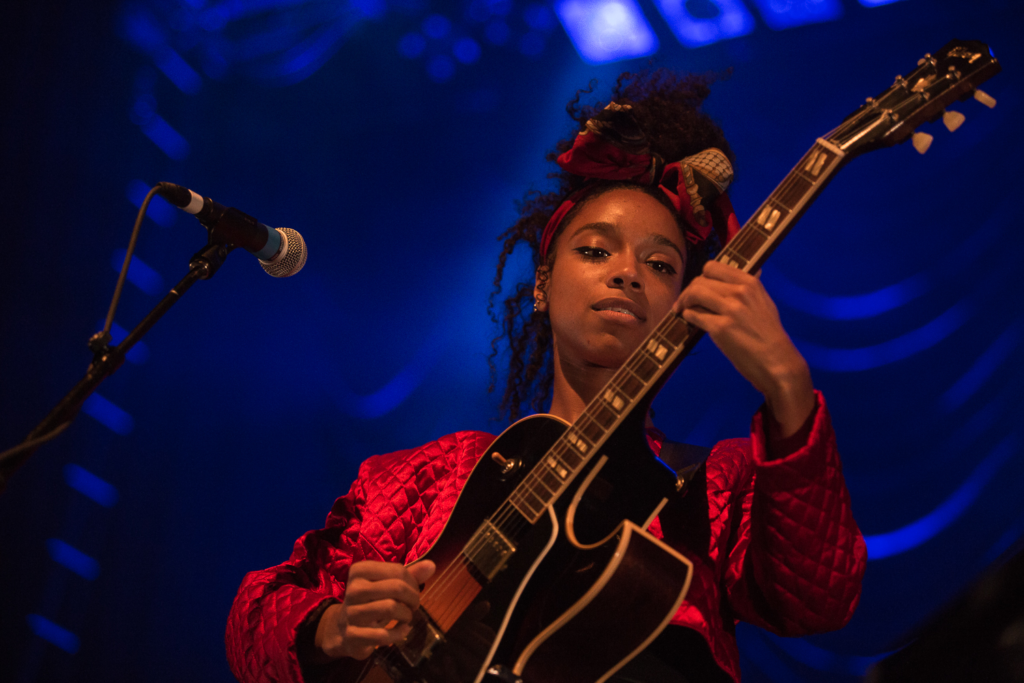 Highlights included a light, airy performance of Dionne Warwick’s “I Say a Little Prayer,” and a rousing, audience-accompanied rendition of “Is Your Love Big Enough?” She closed with “Midnight,” to a large and welcome blast of crowd approval. She basked in what she described as a lovely reception to her first performance in Kansas City. Enough of the audience had seemingly come just to see La Havas that I wouldn’t be surprised to see her headline here again soon.

During the 30-minute intermission, the audience packed in even more tightly than before, and the room was well primed for Bridges’ band to take the stage. Bridges himself soon emerged, wearing a sharp black suit and a zebra-striped shirt, shimmying and bobbing along with the beat, in the vein of soul greats Otis Redding and, of course, Bridges’ main inspiration, Sam Cooke. He began with “Smooth Sailin,” from his breakthrough debut, Coming Home. 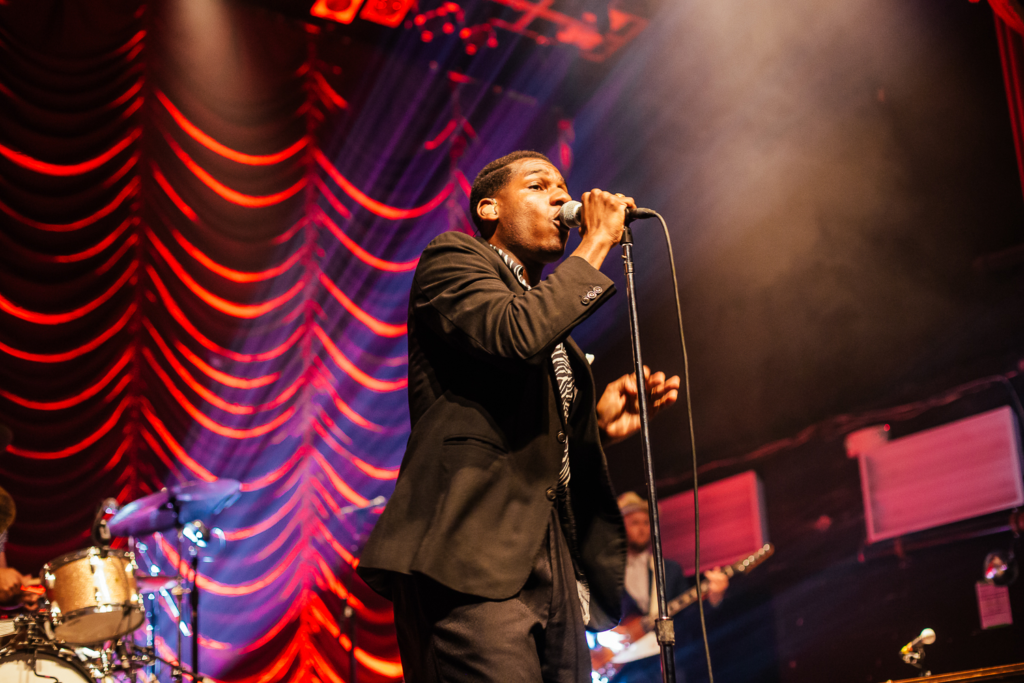 His ascendance since the release of that record last year has been impressive — he brought himself a lot of local attention with his first Kansas City appearance, with Nathaniel Rateliff, and last night’s show sold out months in advance with him at the top of the bill. A few songs into this set, he displayed part of the reason why in an appeal to the audience. All it took was an invitation to dance.

“We came hear to sweat, OK?” Bridges said. ” We came all the way from Fort Worth, Texas, to see if Kansas City has any juice.” The band launched into a jam, and Bridges implored: “Does Kansas City got the juice?” This probably happens every night, but it’s to Bridges’ and his band’s credit that the moment felt unrehearsed. 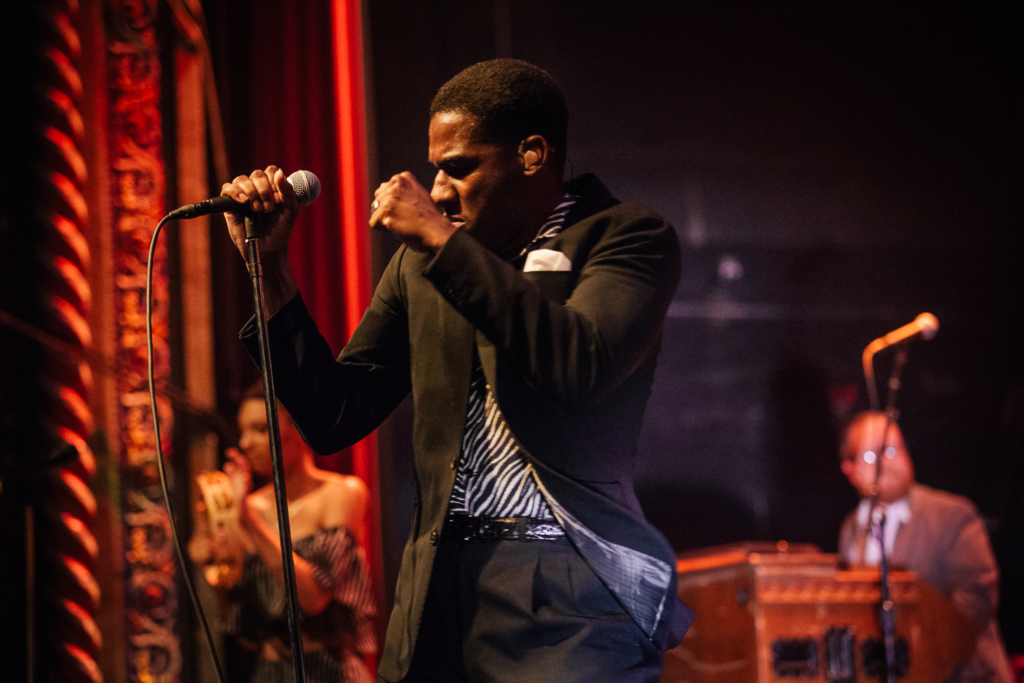 The audience had juice, perhaps not quite from the soul fruit. Hands were raised, old-fashioned twists and shakes enthusiastically imitated. Two bros in front of me high-fived, laying bare some of the awkwardness inherent in attempting to revive this particular old sound. Perhaps it is because the appeal to nostalgia works particularly well for primarily white audiences (like this one as well as crowds for Sharon Jones, Lee Fields and Charles Bradley), a demographic that’s also perhaps more likely to pay a $45 ticket price (including fees) . Bridges is aware of all this, but in a performer who so particularly recalls Sam Cooke (who became more political later in his career, playing to both black and white audiences), it remains something of a distraction — further propelled when Bridges asked for the brown-skinned girls in the audience to make noise but heard just a handful of responses from the robust crowd. 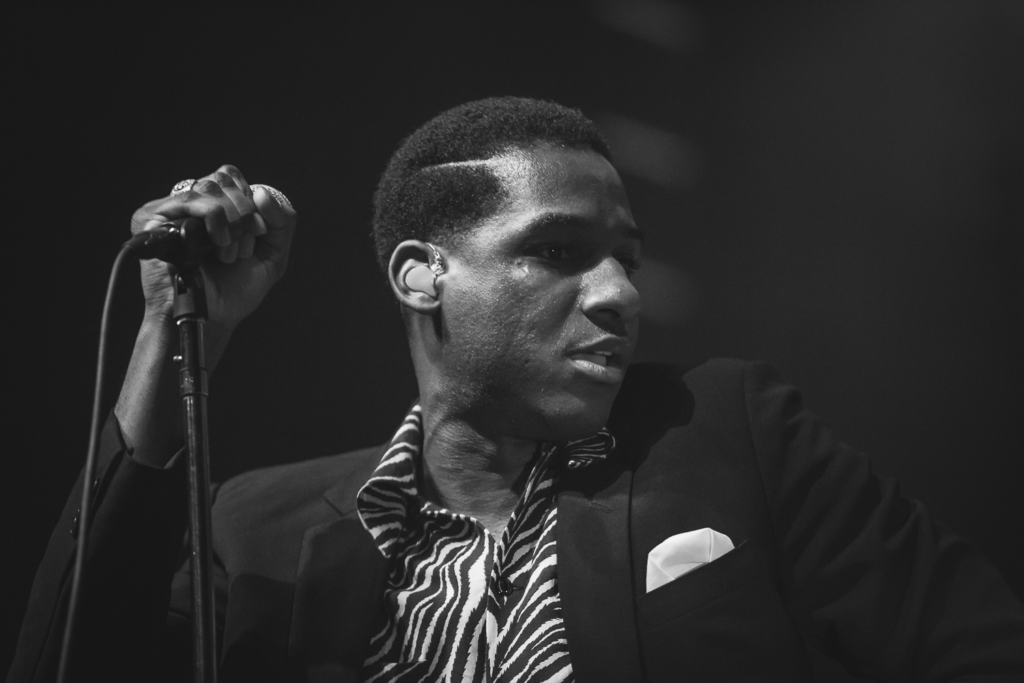 Not that these things got in the way of Bridges’ rich, honey-coated singing, which, yes, sounds remarkably like Sam Cooke’s, minus Cooke’s scratchy yowls. Especially beautiful were Bridges’ performances of “Lonely Road” and “River,” the slower songs giving him an opportunity to slow down and concentrate on his singing. Another highlight was his cover of Ginuwine’s “Pony,” which called on the fun and slightly naughty side of the normally squeaky-clean Bridges.

The show was ultimately a satisfying one, with plenty to like. It was hard, however, not to wonder just how much it differed from a highly polished cover act, one without the grit and the political seasoning that the soul greats of the ’50s and ’60s had (whether they wanted it or not). Bridges has a really beautiful voice. Yet his biggest problem is tied up in the thing that has brought him the most attention: He has chosen to closely imitate one of the most charismatic and deeply soulful singers of all time. It is a herculean challenge that practically no one should even attempt. That said, Bridges is a young man, with a lot of road time and personal living ahead of him (something Cooke was tragically denied). Perhaps in that time Bridges may find a sound and a voice truly his own. 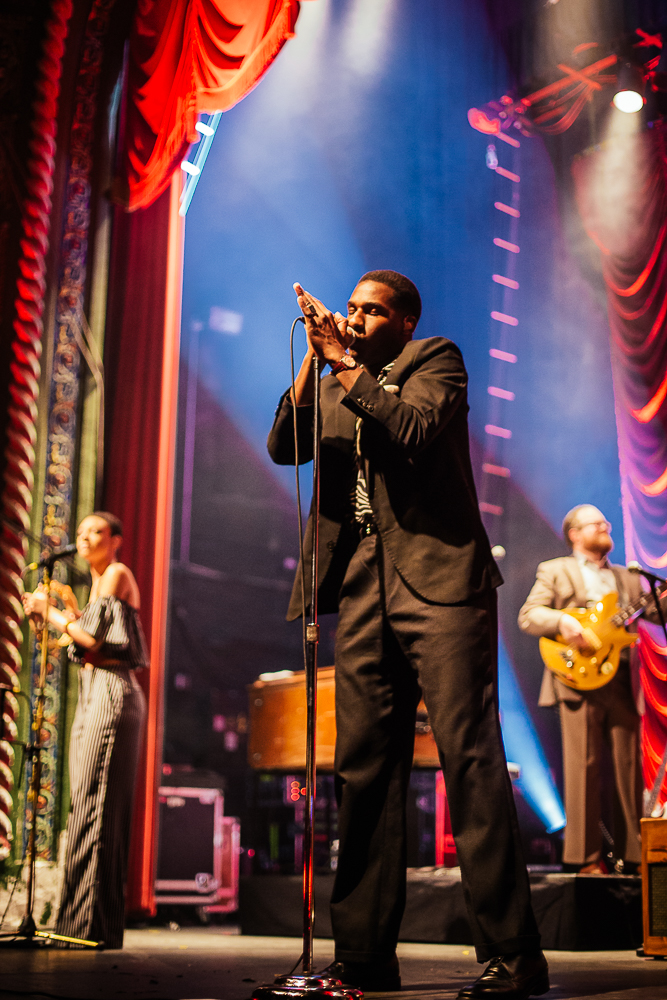 Is Your Love Big Enough?