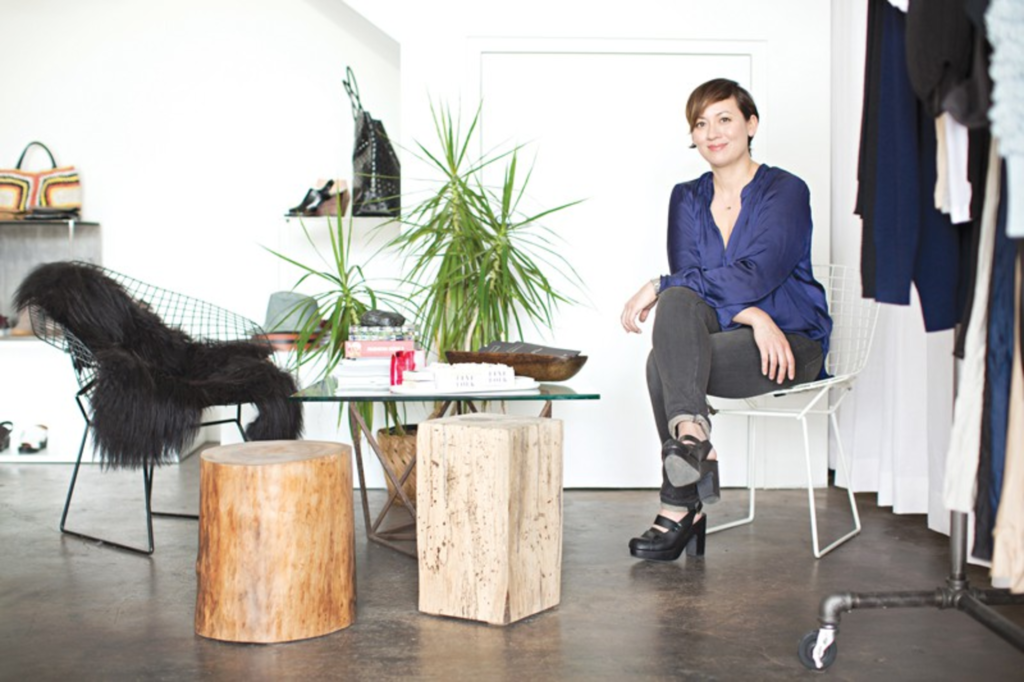 Leslie Fraley nixed the runway and the young, svelte models for Finefolk’s first fashion show. For the intimate affair, held inside an art gallery — Haw Contemporary in the West Bottoms — she instead cast everyday women of all ages.

Finefolk’s location is equally unexpected. The women’s clothing boutique sits several blocks west of the bustling Crossroads District, down an inconspicuous and steep flight of stairs outside the Charlotte Street Foundation, past two bright-red chairs.

Once you know those things, it’s less surprising that Fraley doesn’t look to today’s hottest labels as she builds her collection.

“Everything in here is from independent designers with an artistic bent in aesthetic,” she says. “You have to look a bit to find them — and I think that’s part of the draw.” Fraley is showing me her shop one recent afternoon as she curates — her term for carefully selecting what hangs on the racks.

Fraley, a Kansas City–area native who has lived in Denver and Philadelphia, opened Finefolk five months ago to fill what she saw as a need in the Kansas City women’s clothing market. The city had established shops carrying top designers as well as specialty boutiques, yes. But Fraley says she had struggled to find unique pieces by national, emerging designers known for exceptionally sharp eyes.

“I’ve never really understood the point of on-trend clothing,” she tells me. “Instead of going for a look, I think it’s important that what you wear allows you to express your personality. Sometimes, you have to go a little outside your comfort zone to get there. As I started talking to more people, I realized there were a lot of women in Kansas City who were seeking the same thing.”

So this past November, with no prior retail experience, she transformed her jewelry studio into her dream store. In turn, she has introduced local women to labels previously unavailable in Kansas City. The list includes New York label A Détacher, Black Crane out of Los Angeles, 6397 Denim and Faux/Real accessories.

In the shop’s previous life, Fraley handcrafted the jewelry line Leyna Loves, named for her daughter, who is now 9. With nature as her inspiration, she incorporated leather, pure metals and semiprecious stones. She may start calling her jewelry line Finefolk and sell it in the shop.

With the boutique, Fraley set out to create a natural and contemporary space, and her shop benefits from a white, clean design that surrounds clothing racks built from industrial piping. High-end items, some with price tags near $500, mix with pieces priced closer to $50.

“These are items that you can go back to again and again over time,” Fraley says. “You don’t want clothes that make you feel like you’re in a time warp.”

Fraley wanted a space for her April fashion show that conveyed the same attributes. She found it with the Haw gallery.

“We were able to create an atmosphere less about fashion and more about the clothes,” she says of the show, which drew about 150 people. “All of our designers have a lovely artistry to them, so we thought it was appropriate to show the clothing on women in an environment that celebrated individuality.”

Inside Finefolk, the diverse selection includes staples such as soft T-shirts accentuated with boxy necklines, and special-occasion items with subtle flair: a cocktail dress with two back zippers. Finefolk is essentially Fraley’s own ideal dressing room — one in, say, New York City rather than KC.

That cosmopolitan feel is primary to Fraley’s vision, but no less important to her is building a reputation for catering to women of various shapes and ages.

“Nothing compares to how clothing makes you feel, and I hope all women can feel confident in what they find here,” she says.