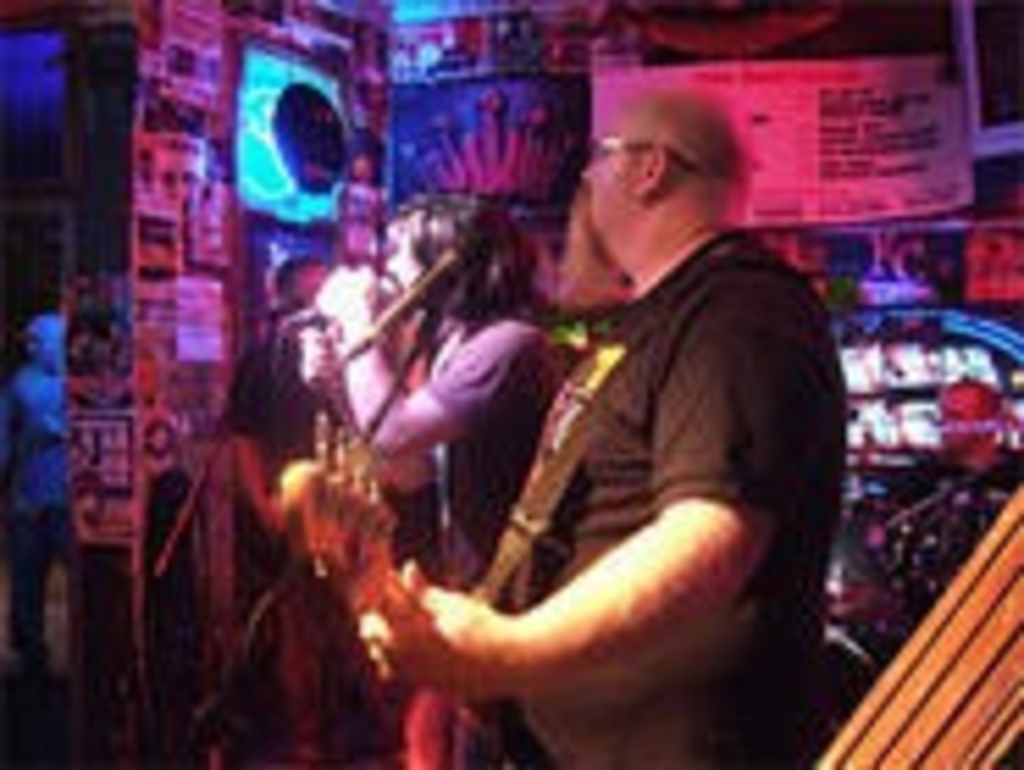 I had never been to old downtown Lenexa before a recent Saturday night, but after a spontaneous bar-hop of that strip, I’m calling it the place where all the cool moms hang out. I went out there with Research Assistants John, Lexie and Erik because I really wanted to go to Blue, a sports-bar-slash-martini-bar-slash-quasi-nightclub. It sounded entertaining, in that “trying to be all things to everyone” sort of way.

At first, the place seemed pretty cool. The sunken nook at the front of the room contained leather sofas and a flat screen with free Nintendo Wii. More flat screens and TVs dotted the place. A large bar sat in the middle of the room, and right by it was a short flight of stairs leading to an upper level with booths. The second floor was bathed in blue lights, and people sat in comfortable-looking leather armchairs that served as prime spots for overlooking the room.

We snagged a booth and turned our attention to the menu. Blue had an array of vodka-based martinis, though we all shuddered to see that blue-cheese-stuffed olives came in the $7.25 Blue Martini. Having had a bad run-in with vodka just the week before, I ordered a $3 Bud Light bottle. That turned out to be a good choice; the rest of my group complained about their drinks, which arrived in small glasses. John’s $4.25 well gin and tonic tasted like it was made with 7-Up, and Erik said his $6.25 Jack and Coke glass smelled like dirty dishwater. Lexie’s oversized dirty martini just tasted wrong. The bad drinks plus the slow service cast a pall on our group.

However, everyone else in the bar seemed to be having fun. We wondered if something was wrong with us. A band played funk and soul covers on a tiny balcony on the other side of the room. The crowd, which consisted of a mix of ages, started dancing. One young, bald guy at a booth by the door was energetically getting into it with a great imitation of James Brown. Later, I asked a server and the bartender for the name of the band. Neither had a clue. I ended up asking a woman sitting up front, who knew the answer: the Beaver Howard Band.

We finally left, and bald dancing guy cheerfully held the door for us. Once outside, we breathed a sigh of relief. John and Lexie lit up cigarettes (yay, Lenexa smoking ban!), and we slowly meandered toward Jerry’s Bait Shop. On the way, we laughed at an older guy who seemed to be putting the moves on his drunk date in the front seat of a car.

We passed a group of women leaving Jerry’s. One brunette was pretty lit and nearly stumbled headfirst into a quaint storefront marked “Law Offices.” As they paused on the sidewalk to talk about what to do next, we went over to chat them up. They were really nice and used an anecdote to confirm that their friend was wasted. “She was waiting in the bathroom line, and she ate a calzone off the server thing,” said Jackie, a pretty blonde. “She just reached over and took a bite out of it.”

“I’m the fucking joke of the night!” said Angela, the hot brunette, after her friends teased her further for her wastoidalness. They also told us that she has four kids — one of whom is 18.

After paying the $3 cover at Jerry’s, we headed for the bar. Even though the place was packed, the bartender spotted us walking his way and immediately took our order. At the end of the night, our two Jack and Cokes, one Bud Light bottle and six Miller Lite draws in pint glasses cost a measly $40, including tip.

After the band played its last notes, people milled about and finished their beers before last call. That’s when I met more cool moms: 32-year-old Sarah and her sister, 35-year-old Becky. They were involved in a group hug with a couple of wasted frattish types, whom they said they didn’t know.

Both described themselves as “music whores,” but not in that sleeping-with-musicians way. Both are married, and Becky has two sets of twins, ages 3 and 7. “We’re addicted to rock,” Becky said. Sarah said that they’re both in a “total bitch band,” which she declined to name. She had an idea for the Pitch: We should review bands by writing how many beers it takes for them to sound good. She suggested a scale of one to five. After five beers, she explained, “you don’t care — it’s like listening to George Jones on the jukebox.” One band that warrants five beers, she said, was classic-rock outfit Charlie and the Stingrays — Charlie and the Bengays, she calls them — because it has the same set list all the time.

Becky and Sarah revealed that they had been dropped off at Jerry’s in a minivan. They were waiting for a taxi to pick them up. “I won’t lie to you. I had a drink on the way here,” Sarah said. She violated open-container laws by using a red Solo cup. “I’m living on the edge. But you won’t get pulled over in a minivan anyway. Everyone should drive a minivan. They think you’re coming off a soccer game.”

We were soon herded out of the bar, so we went over to the Night Rangermobile and contemplated trading it in for a maroon, wood-paneled minivan. At least it’d be a good disguise for any future forays into JoCo.