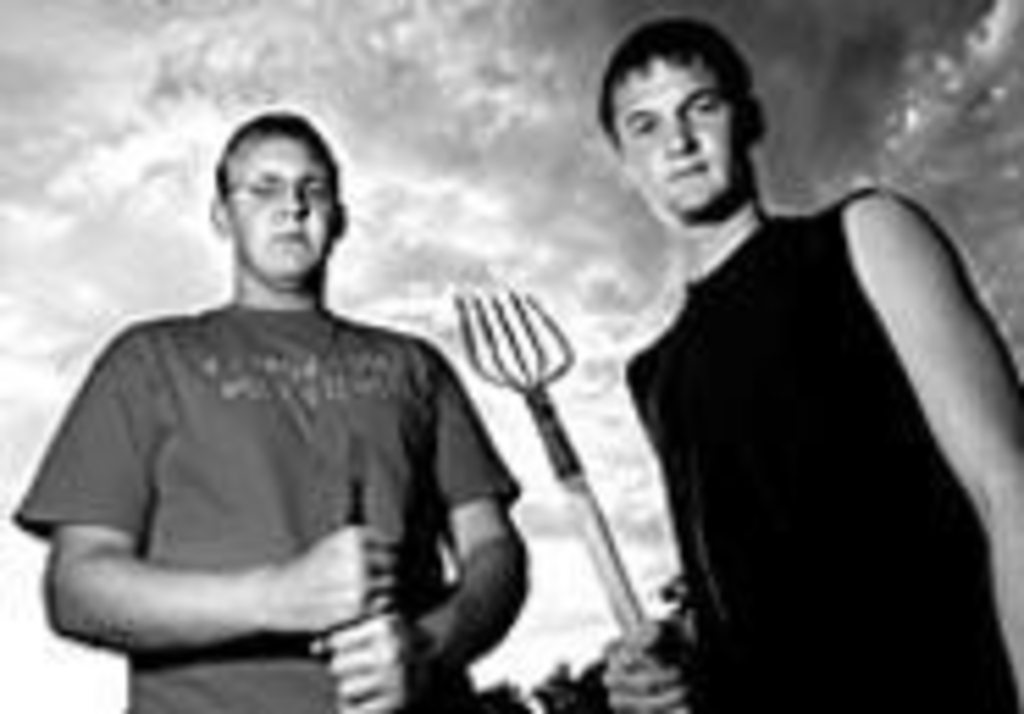 Seventeen-year-old frog hunter Justin Breshears grabs his weapon from the bed of the pickup truck: a wooden-handled broomstick topped with barbed, orange prongs the size of steak knives.

“It’s my Billy Bob rig,” he says, proudly raising the contraption for inspection. “It looks like something the devil would carry.”

Breshears, whose cutoff T-shirt reads “A Score to Settle,” could use more lethal weapons on tonight’s hunt if he wanted. But pistols would wake the neighbors, and he and the other five hunters with him — the biggest guy is the size of an NFL tailback, and the smallest has sloped shoulders and still wears braces; all are about high school age — don’t need the attention. Some of them have hunting or fishing licenses, but some don’t.

On this steamy July night, they’re on private property, out in the country near Oak Grove with a cooler full of beer and a fishing net. Like Breshears, they’re all packing miniature homemade pitchforks, called “gigs.”

It’s not just the noise that makes a rifle unsuitable for tonight’s hunt. A rifle would be inefficient: The bullet blows straight through, and the frog would make its getaway before even realizing it’s been shot. Better to go medieval on it with a gig. Once a frog is stuck, he tends to stay stuck.

In Missouri, frog-hunting season runs from sunset on June 30 to October 31. With a fishing permit, hunters can catch frogs by hand or with a hand net, a gig, a longbow, or a hook and line. A hunting permit expands the arsenal to include a crossbow, a pellet gun or a .22-caliber rifle or pistol. A shotgun is both illegal and messy. No one even considers using one, Breshears says. “Not unless they’re drunk.”

But a frog hunter who appreciates the importance of tradition is going to use a gig. The principle is simple: Blind them and stab them. “Take a flashlight and look for their eyes,” advises eighteen-year-old Matt Garlett, the kid wearing the Cameo hat on tonight’s hunt. “You don’t want to scare them. You want to sneak up on them.”

Breshears comes from a long line of giggers who hail from the southern Ozarks, near the Arkansas state line. “My dad taught me, and his dad taught him and so on,” he says. He’s done what he can to introduce the sport to buddies like Garlett — who, so far, seems to be fitting right in. “We’re not afraid to be called rednecks. There’s nothing wrong with that,” notes Garlett, who met Breshears when both worked at a local feed store.

But Breshears and Garlett know they’re the exception. “Not too many young kids do it,” Garlett says of frog gigging. The kids at Tri City Christian, the private high school from which he just graduated, would rather go bowling than hunting, he says. Breshears agrees. “It’s mostly dying out,” he says. “Nobody’s teaching it to their kids.”

The hunters click on headlamps powered by battery packs worn around their waists. Someone thwacks a tin of chewing tobacco against his palm. They duck under a barbed-wire fence and head toward a marsh. Moonlight gleams off murky water between a thatch of brush and the twisted boughs of oak trees.

Forty feet from the bog, they hear their prey chattering a chorus near the water’s edge: the hollow-drum croaking of the giant frogs.

A month ago, when frog season had just begun, the Forty Woods Bait and Tackle store in Blue Springs laid out a wide assortment of three- to five-pronged frog gigs. Located a stone’s throw from Lake Jacomo, Prairie Lee Lake and Blue Springs Reservoir, the tackle shop is Kansas City’s frogging hub. More than twenty people have bought gigs there this season, says Forty Woods owner Mark Hill. But these days the average gigger is more than forty years old. That doesn’t speak well for the sport’s future.

“I think most people around here aren’t into it because they’ve never been taught to,” says J.D. Hall, a sixty-year-old, ponytailed rod-and-reel repairman who operates from a corner of the shop. “Probably some of ’em don’t know what it is about.”

Hall likes to batter the legs of the frogs he catches and fry them in butter. “Tastes a lot better than chicken, a real firm, sweet-tasting meat,” he says. “When I see a great big frog, I say, ‘Look at the legs on that one.'”

Sometimes the legs jump out of the pan when you cook them, Garlett says. He and his buddies usually donate their kills to the Breshears family, which hosts huge frog fries. But first they have to catch the buggers.

Breshears’ boots sink in the mud as he sneaks closer to the filmy water. He points his headlamp toward the bank, then, seeing two eyes reflect like brass buttons, slams his gig into the mud. Lifted back into the air, it reveals a perfectly impaled, softball-sized bullfrog. As the frog thrashes, another hunter grabs hold of the creature’s legs and twists. The frog slides from the gig with a wet popping sound and is tossed into the fishing net.

Flashlights sweep the water and settle on small pairs of winking eyes. Heat-lightning scribbles color the sky above, threatening rain. The bog smells like a sewer. The hunters creep toward their prey.

Thunk. A half-foot frog beneath a tree is nailed. Thunk. Another one scrambling back to the water gets tagged. Thunk. Someone skewers a third frog, pushing it down in the mud.

A frog near Garlett avoids capture, jumping more than 5 feet toward the far bank. But a gigger on the other side of the bank spots the fugitive launching toward him. Thunk.

At the next stop, a herd of cattle gets in the way; they stampede into the pond when the boys, war-whooping, raise their gigs to chase them. In the darkness, a cell phone rings — a father checking the progress of the hunt. Some giggers have to head home to meet curfew, but Breshears, Garlett and the kid with braces power on.

On their way to the fourth spot of the night, the kids pass a diesel tractor and a row of rusted jalopies. The cattails here are too high to penetrate. Some of the guys are nervous about romping around out here. But Breshears offers reassurance. He’s been shot at only once for trespassing, he tells them. Remember, a shotgun blast sounds like shattering glass when it scatters across the water. Don’t try to reason with the shooter. Just run.

At midnight, the hunt complete, Breshears, Garlett, and seventeen-year-old Luke Kates sit on upturned buckets beneath a lightbulb inside Breshears’ barn. Breshears severs the frogs’ legs from their torsos with a 4-inch knife. They count 22 legs. Garlett and Kates peel away the skin with their fingers, tossing the legs into a bowl. They’ll fill the bowl with saltwater and throw it in the refrigerator until the frog fry later in the week.

As the sun drops below the tree line on Lake Jacomo a week later, J.D. Hall pushes his 15-foot aluminum boat into the water.

As a kid in the Ozarks, he says, he used to frog once a week for food. Now city restaurants offer high-dollar frog legs from industrial frog farms. “They taste better when you have to work for them,” he says. Hall has recruited two never-been-frogging city kids to come with him tonight.

He’ll gig with anyone he can these days. But it’s not easy to find people who think a frog hunt is glamorous.