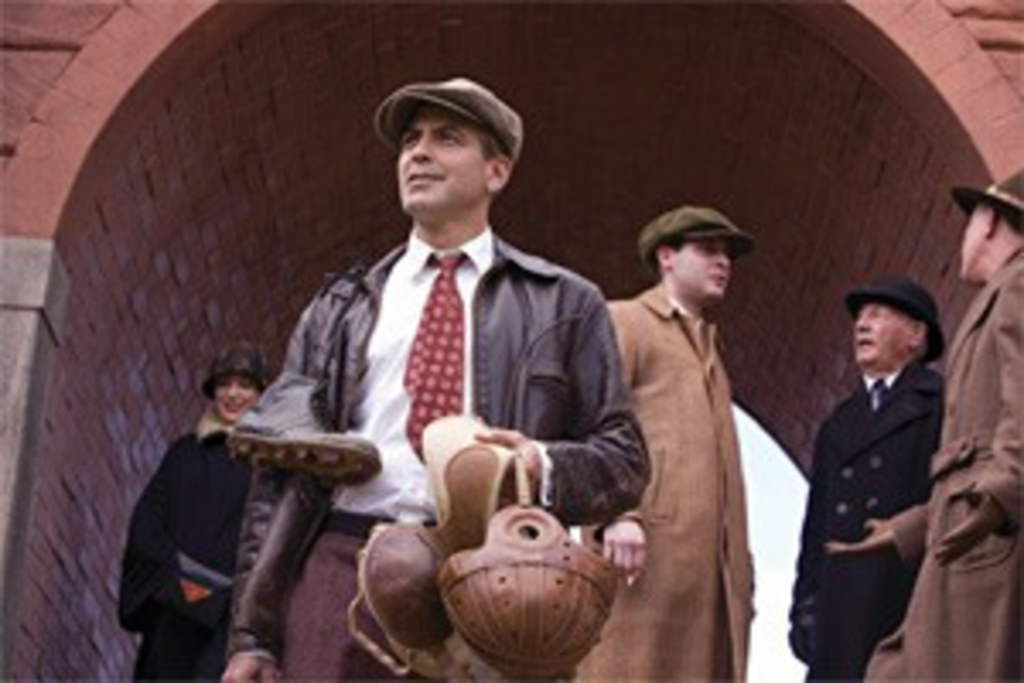 When Time recently featured George Clooney on its cover accompanied by the headline “The Last Movie Star” — note not even a question mark at the end — you didn’t have to read the article to know where it was coming from. After all, in a time when stars of the postpubescent variety are an increasingly rare commodity, Clooney seems a supernova of effortless, old-Hollywood élan.

Onscreen and off, Clooney is like a holdover from a time when men were witty and knew how to dress, how to charm the pants off a woman, and how to throw a punch if the occasion called for it. All of which makes Clooney’s third film as a director, Leatherheads, sound almost too good to be true: a screwball comedy set in the 1920s, with Clooney as a scrappy hustler trying to put a respectable face on the then-down-and-dirty sport of professional football.

The opening scenes are full of promise, with the vintage Universal Pictures logo giving way to a crowd of period extras cheering on Princeton phenom Carter “The Bullet” Rutherford (The Office star John Krasinski), all to the tune of composer Randy Newman’s jaunty, ragtime-flavored score. In fact, for its entire two hours, Leatherheads is rarely less than very promising. But it’s also rarely more.

The Leatherheads screenplay, which was written by Sports Illustrated journalists Duncan Brantley and Rick Reilly and given an uncredited polish by Clooney, offers a minor-key variation on the enduring belief that Americans love a good hero, regardless of whether his heroism is genuine. (“Print the legend,” you can practically hear the ghost of John Ford — or Preston Sturges — saying.) Here, the self-made (or, rather, media-made) hero is Carter, who took time off from school to fight in World War I, where he is said to have singlehanded­ly caused the surrender of an entire company of German soldiers. That faint whiff of exaggeration is enough for The Chicago Tribune to put its ace female reporter, Lexie Littleton (Renée Zellweger), on Carter’s case, under the guise of writing a sycophantic puff piece. It’s thus that Carter and Lexie come to cross paths with one Dodge Connelly (Clooney), the down-on-his-luck captain of a nearly bankrupt pro-football team, the Duluth Bulldogs. Whereas Carter regularly takes to the lush college field before a few thousand adoring fans, Dodge and his ragtag teammates play on muddied, makeshift fields before crowds of a few … well, just a few. Dodge, whose eyes twinkle with entrepreneurial invention, comes up with a plan for Carter to help save his pigskin.

It’s an appealing screwball premise, and there’s little question that Clooney has done his homework. He has populated Leatherheads with fast-talking ink slingers who seem to have walked right out of The Front Page or a battle-of-the-sexes scene from It Happened One Night. He has also cast actors who play very well in period mode, uterring dialogue strewn with rat-a-tat rejoinders.

But for all that looks and sounds right here, Leatherheads never quite feels right. The tempo seems a half-beat or so off — it aims for clickety-clack and ends up closer to clickety-clunk. There are even a few long scenes, such as the first extended meeting of Carter, Dodge, Lexie and Carter’s self-interested agent (Jonathan Pryce), during which the pace slows to a crawl. And for all the novelty of setting a movie against the early days of that national religion known as the NFL, Leatherheads devotes curiously little time to on-field action, even though that action makes up some of its liveliest scenes — the players’ bodies a blur of muddy motion, the refs consulting their newly minted rulebooks before making calls.

It’s also the least visually adventurous of Clooney’s three films — an intentional choice, according to the press notes. Clooney and his cinematographer, Thomas Sigel (who also shot, quite brilliantly, Clooney’s Confessions of a Dangerous Mind) here express their affection for the “static” filmmaking grammar of the ’30s and ’40s comedy classics to which Leatherheads is an homage. But look closely at those films, and you will see that even though their directors did not move the camera ostentatiously, when they did, they did so as elegantly as a camera has ever been moved.

These aren’t easy criticisms to make. Clooney isn’t just the last movie star — he may be the last of a breed of multi-hyphenate minimoguls able to use his charm and popular clout to back risky projects. In what have been generally bleak times for mainstream American movies, he has done a great deal to sustain our belief in the possibilities of smart Hollywood movies for grown-ups. (Besides, screwball comedy is hard, and Leatherheads is nothing if not an admirable stab.) My point is simply that Clooney makes us expect the best of him each and every time, and Leatherheads is a good deal less than that.