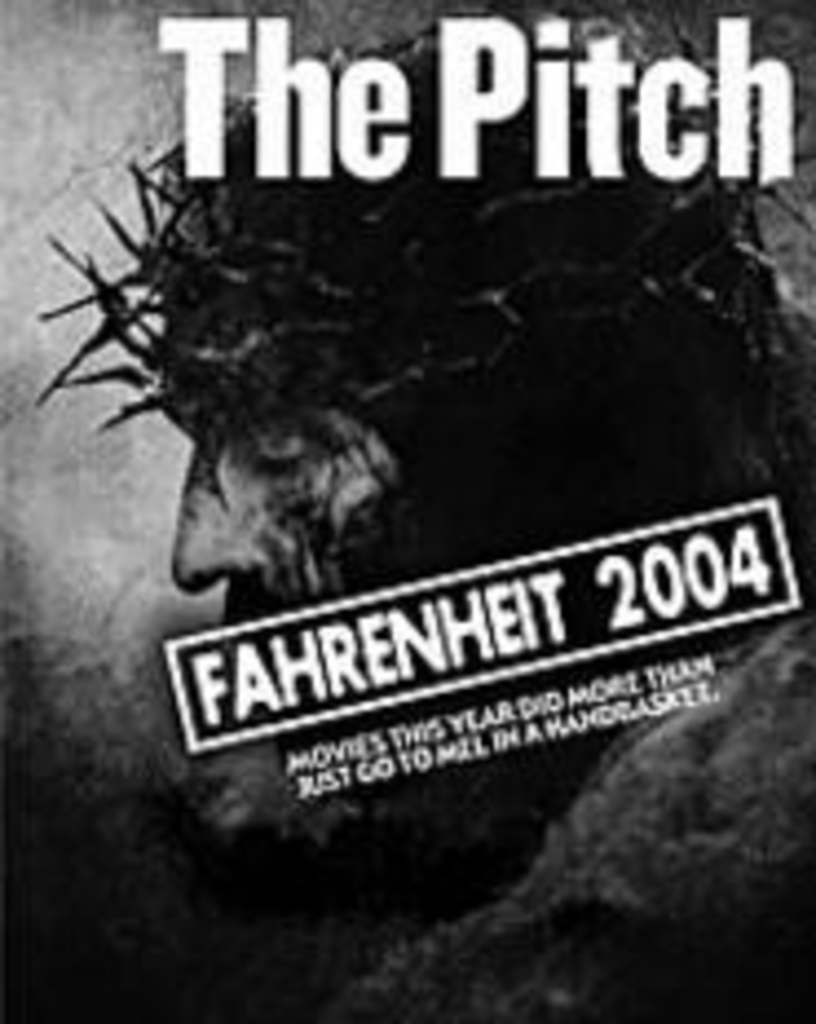 Our best movies of the year actually may have been anything but the best to a few of our critics — such is the dilemma of offering employment to writers of dissenting opinion. In other words, the No. 1 film of 2004 wasn’t universally heralded by our team of Bill Gallo, Melissa Levine, Jean Oppenheimer, Luke Y. Thompson, and Robert Wilonsky; then again, neither was Hellboy — though that film was lavished with praise by one of the above scribes. No, really, it was.

The Scene top 10 is determined by means of a composite score: Each critic submitted his or her top 10 films of the year, and each film’s ranking was added to reveal the overall winners. Following are the top 10 films of 2004, as voted by the Scene film critics. Feel free to vent your outrage to the editor; Lord knows the critics will.

1) Sideways — It’s not as deep as About Schmidt or as cutting as Election, but Sideways is a hilarious, warm, and winning addition to the oeuvre of Alexander Payne — one of the finest directors at work in American cinema. Offering a twisted version of the road-trip/buddy flick, Sideways gives us Miles (Paul Giamatti), a bitter wine freak attempting to escape the twin sorrows of a failed novel and a failed marriage, and Jack (Thomas Haden Church), a washed-up, small-time actor desperate to live it up for a week before his wedding. The agenda? A wine-tasting tour of the Central California Coast — for Miles, anyway. Jack just wants to get laid. The juxtaposition between Miles’ brittle angst and Jack’s doofy recklessness is rich with conflict and with news; in the end, the men have something to teach each other, though they would never admit as much. With an excellent, subtle performance by Virginia Madsen, as Miles’ love interest. — Melissa Levine

2) Maria Full of Grace — First-time director Joshua Marston’s compelling drug movie has no automatic weapons and no car chases — just an unforgettable portrait of a 16-year-old Colombian girl (played by the extraordinary Catalina Sandino Moreno), who’s forced by circumstance to become a “mule” for shabby drug dealers. She swallows scores of balloons stuffed with cocaine, then boards a plane for New York to deliver the stuff. But she’s no victim. Exploited by sweatshop bosses, a loser boyfriend, and her own family, she nonetheless shows a feistiness and an ability to think quickly that helps her, against long odds, to wring a new life out of despair and abuse. The atmosphere is harrowing, the performances uniformly superb. This splendid debut signals great things for Marston. — Bill Gallo

3) House of Flying Daggers — Zhang Yimou had two movies in U.S. theaters this year: Hero, which Miramax bought for $10 mil and shelved for two years, and this martial-arts stunner, which is deeper and darker than its predecessor. That’s not to slight Hero, but to praise House of Flying Daggers. In telling of an ill-fated romance between an assassin (Zhang Ziyi) and the cop (Takeshi Kaneshiro) bound to bring her in, it’s a far more resonant picture — dazzling with not just its stunts, but also its story, which simply has a little more heart than the U.S. version of Hero. It’s stunning to look at, too, with every second framed like a painting bound not for a screen but a museum wall, where it can be ogled till closing time. Somehow Yimou gets his greens greener and reds redder than any other director working today. You will not see a more beautiful movie this year . . . or any other. — Robert Wilonsky

4) Eternal Sunshine of the Spotless Mind — Everyone knows that Charlie Kaufman can write a clever script, but often the gimmick’s the thing, whether it be a portal into John Malkovich’s head, Patricia Arquette’s body-hair problems, or Nic Cage playing twins. There’s a gimmick here too — the targeted erasure of memories — but like the best sci-fi, it’s primarily a metaphor for a deeper dilemma: the question of whether or not we’d really be better off eliminating heartbreak from our lives. Kaufman’s funhouse structure serves the story by representing the dream state, getting inside Jim Carrey’s head as portions of his mind are being destroyed, and director Michel Gondry rises to the challenge with a hallucinogenic sound mix and editing style. Of course, none of it would work if not for Carrey’s very real portrait of heartache and Kate Winslet’s charm as his free-spirited muse. — Luke Y. Thompson

5) Bad Education — If Pedro Almodóvar’s directorial career needed a summing-up in the wake of Talk to Her and All About My Mother, this is the great film to do it — a fascinating meditation on sin, sexuality, the terrors of the Catholic Church in Spain, and the comforts of art, all dressed (and cross-dressed) up as a seamy film noir that gleefully bows to everything from Vertigo to Double Indemnity to Rashomon. It’s the tale of two rural schoolboys, once abused by a Franco-era priest, who grow up to be wildly disordered men — one of them a drag queen with a taste for blackmail (The Motorcycles Diaries‘ Gael García Bernal), the other a celebrated movie director in Madrid (Fele Martínez). When their old tormentor, now an ex-priest, also shows up with his own version of past events, Almodóvar’s cleverly interwoven trio of narratives enters a dazzling hall of mirrors. — Gallo

6) Napoleon Dynamite — We all know how nerd movies are supposed to go. Our lead guy is some basically good-looking kid like Anthony Edwards hidden under horn-rimmed glasses, just like you and me, except that he gets beaten up more often. Infatuated with the most beautiful girl in the school, he concocts harebrained schemes to win her over, ultimately managing to woo her away from her jock-bully boyfriend and saving the day in a big and noticeable way. Real nerds, however, are often ugly, socially inept, delusional, passive-aggressive, and totally lost in their own world. The trick is to find sympathy for them anyway, and director Jared Hess pulls off that neat trick with flying colors. Napoleon gets his brief moment in the sun at the film’s climax, but his real triumph is in finding love and friendship among the equally out-of-place. The supporting cast plays like a Mike Judge cartoon come to life. — Thompson

7) Osama — A ruthlessly uncompromising look at the status of Afghan women under Taliban rule, Osama marks the stunning feature debut of writer-director Siddiq Barmak. Marina Golbahari, a girl whom Barmak found begging on the streets of Kabul (all the actors are amateurs), plays the 12-year-old protagonist, whose widowed mother disguises her as a boy because unchaperoned women are forbidden to appear in public or hold jobs. When militants round up the boys of the village for religious indoctrination, the girl’s true identity is discovered, and she faces a future that is truly worse than death. A painful, harrowing, essential film. — Jean Oppenheimer

8) Fahrenheit 9/11 — Michael Moore got messy with his facts and occasionally with his film, which engages but occasionally outrages even its most passionate supporters, who wish he had tried harder to connect the dots he so casually tosses into the air like a kid playing with empty shell casings. Like George W. Bush (and, oh, Mel Gibson), Moore’s a divider and not a uniter; he couldn’t convert a libertarian, much less a neo-con. But he’s first and foremost an entertainer — a song-and-dance man putting on a show at which you can hurl dollar bills or rotten tomatoes, yer pick. This is no more a documentary than a puppet show is a Jerry Bruckheimer movie, and only people who’ve never watched reality TV could confuse it with “truth,” which doesn’t diminish its entertainment value. Of course, it’s a relic already, too, a quaint vestige of the liberal rage and optimism that dissipated at 9:12 p.m. November 2, when the map behind Tom Brokaw went red and Michael Moore got a little bluer. — Wilonsky

9) Metallica: Some Kind of Monster — Here’s a cross-sell: World’s most popular metal band investigates its own dysfunction through group therapy. Think it’ll attract the mulletheads and the NPR crowd? Indeed it should. Perhaps the finest rockumentary ever made, Some Kind of Monster is a brilliant, probing examination of relationships between and among men — creative men, addicted men, wounded men, angry men, and hilarious men, intentionally and otherwise. Directors Bruce Sinofsky and Joe Berlinger had the genius (or good fortune) to capture the band in crisis, when internal strife — largely the antics of mercurial, infantile leader James Hetfield — threaten to break up the group forever. Can drummer Lars Ulrich requisition the strength and support to keep it all together, even while Hetfield takes his sweet time drying out? For those who hate metal, the music all but disappears from this movie. Instead, rising like a phoenix from the ashes is the band’s honest, noble, and humbling attempt to get real. — Levine

10) Closer — Sophisticated and savage, this lacerating chamber piece offers a bleak view of human relationships. Based on the stage play by Patrick Marber, it returns director Mike Nichols to the fertile territory he mined in Carnal Knowledge and Who&sup1s Afraid of Virginia Woolf? Under the guise of telling the truth, the four protagonists — two couples whose romantic loyalties are continually shifting and realigning — lay waste to one another’s emotions with alarming ease. Powerfully acted, especially by Clive Owen, Jude Law, and Natalie Portman, Closer reveals the terrible damage that people do to one another in the name of love. — Oppenheimer