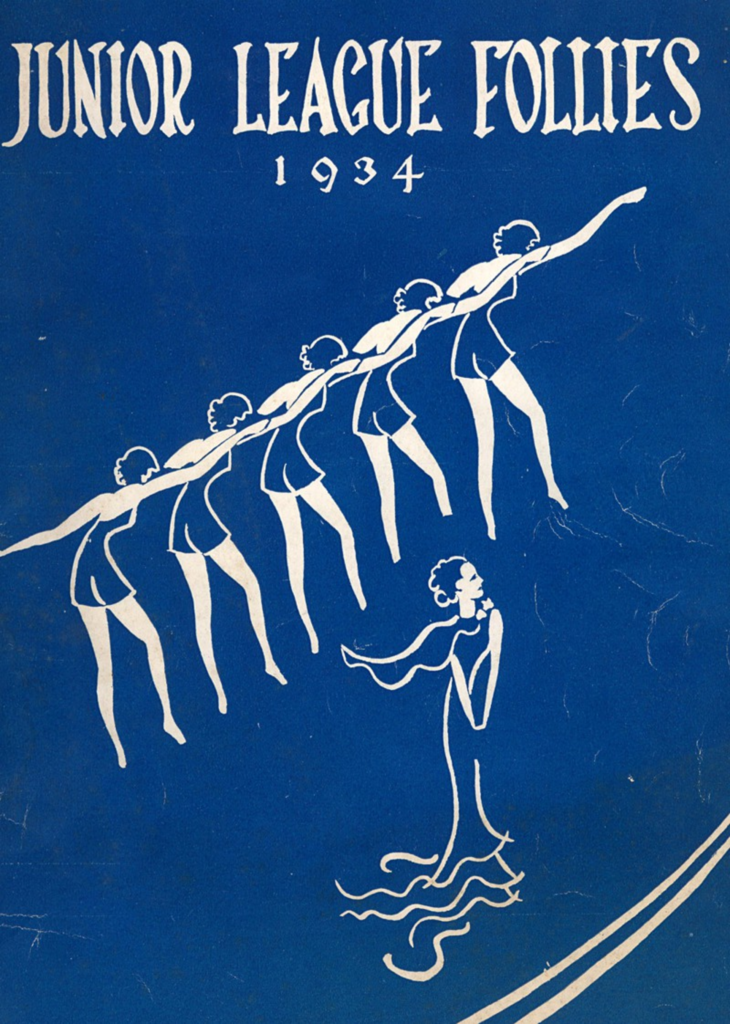 In the thick of the Depression, the well-to-do do-gooders of Kansas City’s Junior League opened a thrift shop at 504 Westport Road, today the home of Karma (the “Eat. Drink. Rock” place). The women fixed up the spot in the fashion of, according to this book, “a Mexican open-air mercado” with a thatched-roof dressing room; a “gayley striped awning”; and window panes, each baring “a colorful design”: “a hobby horse, a corset of Civil War vintage, a pair of grandma’s high-lace boots.”

Those descriptions are credited to Mildred Trimble, “chairman” of the Junior League Thrift Shop. The store opened in 1934, the year of this program for the league’s then-annual Winter Follies; by the time of the event, the shop was already catching on. She writes, “We are besieged with all manner of odd requests — white satin wedding dresses, men’s leather jackets, baby pens and even sanitary cots. Our patrons are beginning to depend on us. May it be our good fortune never to be found wanting.”

Founded in 1914, the Junior League of Kansas City has long asked young society women to invest their time repairing the problems of their community. In ’34, the league’s charity supported the Delano School for Crippled Children, two dental clinics, a prenatal clinic, the George H. Nettleton Home for Aged Women, and the Catherine Hale Home for the Blind.

Perhaps its most lavish fundraiser each year was the Winter Follies. The 1934 edition, commemorated in a program as thick as a Vanity Fair issue, promised silly sketches and spirited numbers, most likely provided by New York theatrical outfitters Cargill Productions, which rented scripts, sheet music and even directors to amateur performers around the country. (The program credits James Cargill with “Business Direction.”) We can only guess how the show turned out, but one thing is certain: Singing and dancing onstage at the Shubert Theater offered much more glamour that toiling in the thrift shop.

Highlights of the Show

• Act 1, Scene 5: “When a Babbitt Meets a Bromide,” starring Francis and Winthrop Williams.

• Act 1, Scene 14: “Rolling in Love,” sung by Clarice Thompson and George Clay; danced by “the Rhythm Girls and Ingénue and Juvenile Octette.”

• Act 2, Scene 11: “In Bavaria,” featuring the songs “Drink Up” and “Auf Wiedersehn” as well as a dance “with a bow to Mr. Fred Astaire” performed by Frances and Martha Aikins.

The program swells with ads targeting the well-heeled. There are memorable photos: a ’34 Dodge sedan, Ruth Glover’s Modern School of Dancing (6247 Brookside), Holmes Peek-In Kennels (6117 Heits in Merriam), and smartly hatted Junior Leaguers being served Goetz Country Club Beer. (Country Club, the ad brags, was “Made in America’s most modern brewery,” a claim entirely at odds with the way beer is marketed today.)

Other photos offer a rare glimpse into the dining rooms of KC’s past: the Pioneer Grill at the Savoy, at Ninth and Central, is all dark bricks and murk, while the Pompeiian Room at the Hotel Baltimore is airy and grand, with a dozen-plus round and white-clothed tables arranged like a great garland of flowers about the dance floor. (The league held a ball here after the final curtain, on the third night of the ’34 follies.) The bar at the Plaza Royale is a gleaming half-circle of Art Deco symmetry. The dining room at Pusateri’s (“Society’s Meeting Place,” at 1213 Baltimore) is crammed with four-tops and tuxedo-clad servers. (See pitch.com to view more.)

Among the many photos of Junior League members modeling fabulous gowns or posing for advertisements, my favorite is “Miss Anna Lee Broaddus.” She’s done up in a rubber raincoat and holding a black umbrella, so she can spill salt like the Morton’s girl. In most photos, Junior Leaguers’ formal dresses reveal a society that’s tired of corsets but not yet dedicated to bras.

In ’34 the Kansas City Junior League boasted 375 members, all trained by the league in sociology, parliamentary law and civic conditions. That’s according to an introduction by the Junior League’s 1934 president, Mrs. John F. Rhodes. Once known as Helen Williams, Rhodes was the daughter of Walter Williams (the founder of the Missouri School of Journalism and of the idea that reporters should follow a creed of ethics). She married Capt. John Frances Rhodes in 1917. The Columbia Tribune called the ceremony “one of the prettiest weddings ever solemnized in Columbia,” and The Evening Missourian reported that “Little Laura Stephens Gray” toted the rings in a calla lily. A little over a year later, Mrs. John F. Rhodes named her first daughter “Hulda” to honor her mother, who had recently died.

“Boxes and Loges” were provided by Mrs. James M. Kemper (Ruth Bubey), whose husband ran Commerce Bank in direct competition with his brother, R. Crosby Kemper, over at City Center Bank, which would become UMB.

Costumes came from Mrs. Francis Wornall, whose husband was “Director of Fire” in Kansas City in the early ’40s — he also wrote a history of First Cavalry Baptist Church and patented a hose nozzle (unless this town had more than one Francis Wornall).

Mrs. Samuel Sebree (Alice Eden Smith) served as business manager. “Sebree” sounds familiar because of the family’s prominence in the Sebree, Sebree & Shook law firm, which has defended Philip Morris since 1954 and today is known as Shook, Hardy & Bacon, which could be the name of the world’s greatest cop show.