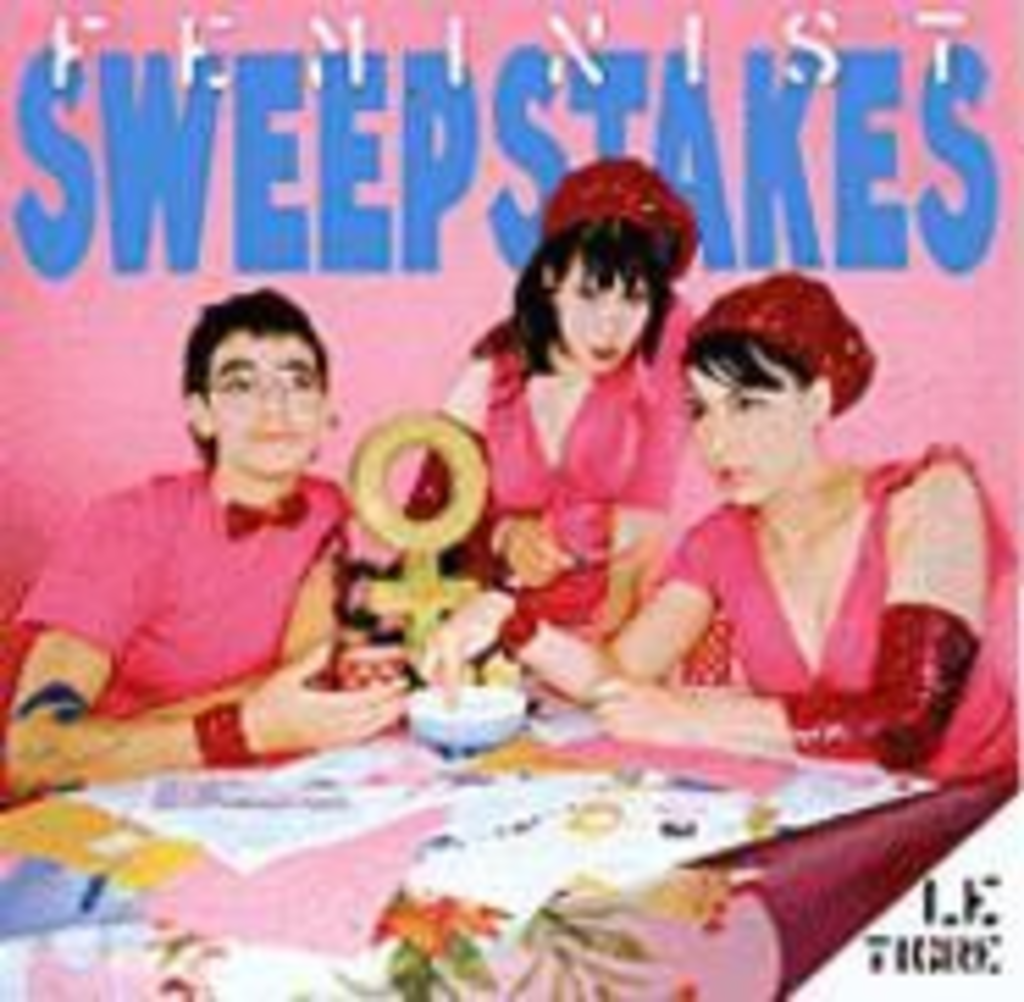 Why does it sound cool, even inspiring, when a rap group confidently hypes itself (see Public Enemy) but vain and sophomoric when a guitar-slinging outfit does the same? Leave it to Le Tigre’s feminist-rock icon Kathleen Hanna to challenge another double standard. The trio’s second full-length album, Feminist Sweepstakes, overflows with self-referential sentiments. For the ladies and the fags, yeah/We’re the band with the roller-skate jams, the group chants tonelessly in its opening number, “LT Tour Theme,” isolating and playing to its target audience in a manner that would make demographics-minded advertisers drool. Near the end of that tune, Le Tigre chuckles knowingly as an awful overdubbed guitar solo elbows its way through the band’s perky beats. We’re too cool for that greasy-boy wanking off, Le Tigre tells its fans with a wink. Now, Won’t you dance some more?

But last time around, Le Tigre didn’t have to ask. Its debut disc wrapped an impressive revolution inside ragged riffs, cheery samples and beats that wouldn’t quit, successfully swimming upstream and dashing all preconceived notions of what a “riot grrrl” band should sound like. By contrast, Feminist Sweepstakes merely treads water. Granted, it’s not as shallow as the dreaded dealing-with-fame follow-up album with which suddenly tortured artists alienate their listeners by whining about the woes that accompany mass adoration and fabulous wealth. It is instead a valid statement of achievement, a record dedicated to recognizing how Le Tigre’s work has inspired and empowered hundreds of women. It’s the group’s right to bask in the glow of what it has accomplished, as when guitarist-vocalist Johanna Fateman declares, Le Tigre family and friends/I hope this feeling never ends.

But so much focus on the group’s past and present all but eliminates the forward-thinking vibe that made its previous work so vital. Hanna’s vitriol remains powerful, but in light of daily revelations about the unfathomably inhuman treatment of women in Afghanistan, her searing rage about stalker films and Mrs. Doubtfire‘s airing on Mother’s Day seems misplaced. And “Dyke March 2001” might be a memorable live number — given that a slide show is probably involved and that monotonous beats aren’t necessarily a bad thing in a dance-floor setting — but on record, its blend of cutesy Stacey-Q-style electro-cheese, overlapped vocals and strident soundbites (We’re just this huge strong mass of feminist fury) becomes interminable. Equally unfortunate is Tammy Rae Carland’s overly familiar manifesto at the close of “Tres Bien,” which should have listeners reprising Fateman’s refrain from earlier in the tune: I get it/I get it.

Musically and lyrically, Feminist Sweepstakes offers few new ideas, and songs such as “Much Finer” suggest that the fatigue that comes with being full-time musicians-activists-icons might be to blame. In that song, an exhausted protagonist spends the day in bed feigning illness, then says in a resigned voice, Tell your friends I’m still a feminist/But I won’t be coming to your benefit. As the simple backdrop fades, she decides I give up/I give up. Such frustration surfaces again with “On Guard” (Sometimes I just wanna stay inside) and “My Art” (My art is better than your art/And you will be better off when I’m gone). In the latter song, driven by an infectious keys-and-guitar hook that belies the seething rebellion of its message, Hanna invites detractors to Try your hand at forcing my suicide. Then she delivers the disc’s most optimistic line, telling her critics, Just know I’ve only begun. It’s a welcome promise that, in the future, Le Tigre will resume its role as a catalyst for change. But on Feminist Sweepstakes, the group simply invites the converted to a party for the progress that’s already been made.