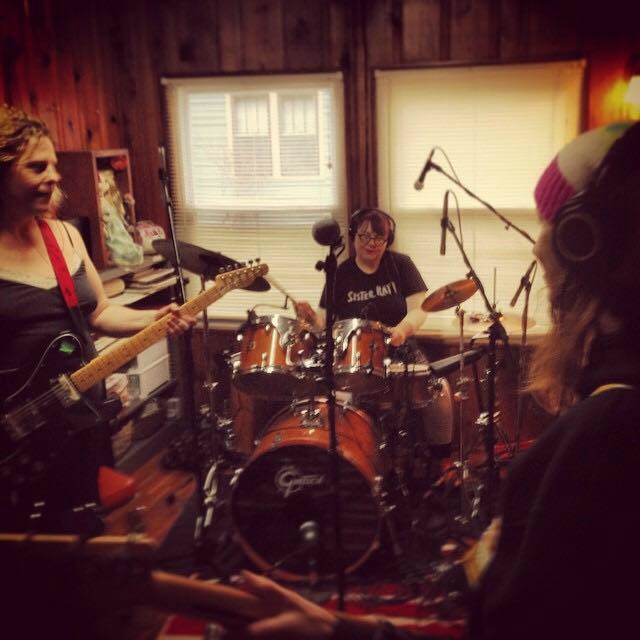 Based on the screen-printed posters covering the walls in Sister Rat’s practice space — Neurosis, Elder, High on Fire — you might assume that the band was pure doom metal. And if you saw Sister Rat’s early shows, which had a heavy, sludge-metal thing going on, you’d be right. But things have changed. It’s now more of a “Velvety Underground punk band,” says guitarist and singer Christi Rat.

“We’re definitely a different band than we started out as,” Christi continues. “I can’t really write anything other than punk guitar, thrashin’ stuff. We’ve brought a more psychedelic edge into our music.”

And, says bassist/violinist Katie Rat, “we’ve been doing some harmonizing on the vocals.”

The three women have been playing together for awhile now — their first show was in September of 2012. And they released an EP last summer and are already working on a second. (The track list is written on a white board on the wall.)

Sister Rat is also part of this weekend’s Femme Fest at the White Schoolhouse, where they’ll play as part of a six-band bill that also features readings from writers Simone Savannah and Mercedes Lucero. They’re a natural fit: “We’re female-fronted, backed, and sided,” Christi notes.

“It’s great that it’s featuring female and female-identifying people,” Katie says of the fest. “That’s the future, too: all ages, all people. Hopefully, music becomes more of a space for everybody.”

Femme Fest is Saturday, February 16, at the White Schoolhouse with Sister Rat, Heidi Lynne Gluck, Kawehi, Vigil And Thieves, Mourning Ritual, and The Typing Pool, along with readings from Simone Savannah and Mercedes Lucero. Details on that show here.