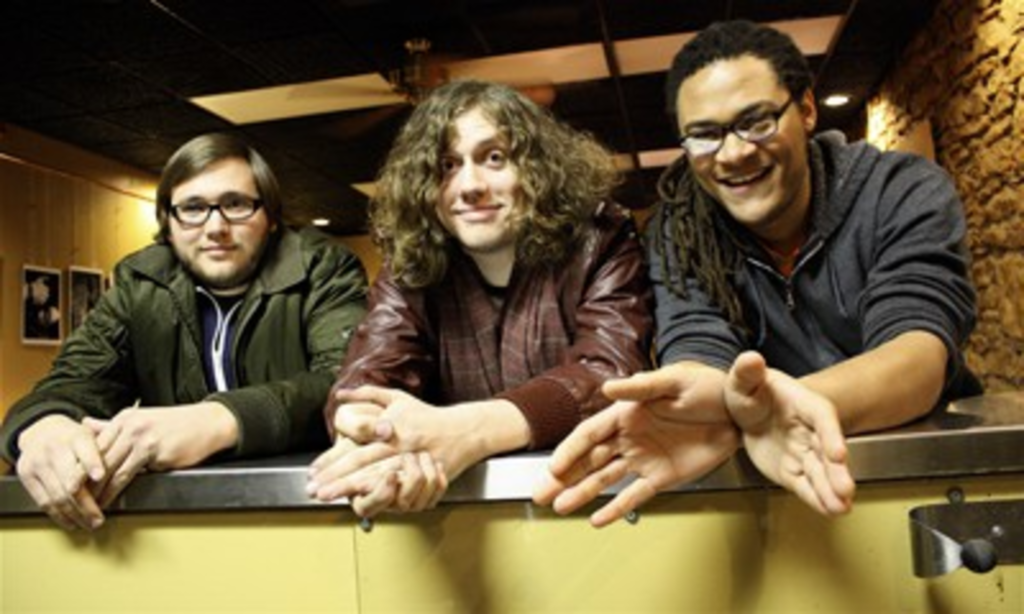 “Cowboy Indian Bear is a superhero who manifests himself through our music.” explains Marty Hillard, who comprises one-third of the newly formed Lawrence band.

The other two members, C.J. Calhoun and Beau Bruns, also want nothing to do with the Village People. Calhoun actually bought the band name from a friend for a six-pack of Sol, and he has been fielding queries of “which one are you?” ever since.

Furthermore, there is no I in Cowboy Indian Bear (OK, there are two of them, but you get the point). The trio exhibits a spirit of equal partnership, with all of its members singing and playing multiple instruments.

“I feel like what we collectively bring to the table is much stronger than what any of us could do as individuals,” Hillard says.

As the band prepares to release its three-song debut EP this weekend, it’s experiencing a vaguely unfamiliar sensation: hype. Recent CIB shows in Lawrence have drawn packed houses, and the band has purposely not posted any songs on MySpace in an effort to build anticipation for the EP release.

The gesture is indicative of the band’s deliberate decision-making process, which calls into question the humdrum routine of posting songs online and making fliers for shows that no one attends anyway.

“One thing that was very clear to us was that whatever most local bands were doing was not working,” Calhoun says, counting his previous band, the Kennedy Luck Club, among the guilty.

“When I was younger, bands like the Anniversary and the Get Up Kids were getting out there and making stuff happen,” he adds. “That’s something that, for whatever reason, doesn’t seem to be happening anymore.”

CIB certainly has the sonic goods, though time will tell if the rest of the world can be bothered to listen. The group’s sound is built on a shared affection for such bands as Death Cab for Cutie, Radiohead and Broken Social Scene, though all three members will happily throw down in a conversation about hip-hop or hardcore.

The new EP is melodic and inviting, yet also a touch elusive — the mark of a band that doesn’t pounce on the lowest common denominator.

“You look at Radiohead over the course of seven albums, and you can’t help but appreciate that they draw from so many influences,” Hillard says. “You’ll never hear influences like Refused in our music, but we glean their adventurous spirit.”

One constant is the group’s shuffling bass lines, which are generally the first thing written.

“Once I started paying attention to the bass, it became a heck of lot easier to write coherent songs,” Hillard says. “You can spend a lot more time just using the guitar to color what’s already there.”

The band also tints its compositions with harmonies and electronic beats. Bruns plays off prerecorded elements in a live setting, but they function more as extra limbs than as crutches.

“Our arrangements still are really sparse at this point,” Hillard notes.

Sparse perhaps, but no less developed as a result. The group practices three nights a week at its space in Williamstown (10 minutes outside of Lawrence). The pad doubles as a shared recording space with engineer Josh Browning, who tracks all of CIB’s material.

“We do everything one song at a time,” Calhoun says. “There’s a certain feeling you get with a new song, and we want to try our best to capture it.”

As the EP proves, there’s also a certain feeling you get with a new band — one of brotherly Bear love.

“Marty and I had admired each other’s songs for a long time,” Calhoun says of the group’s formation last spring. “We had never been single at the same time, so we never had a chance to hook up.”

The trio hit it off so quickly that Bruns and Calhoun abandoned the Kennedy Luck Club album they were working on. Conveniently, Hillard found himself suddenly single after two of his bandmates in the Jen Say Kwahs split town.

All three members relocated from Topeka to Lawrence in the summer of 2007 with hopes of getting heavily involved in the scene. To that end, Calhoun and Hillard also founded a local music webzine called oh!mr. (ohmr.org) to build some bridges between local musicians and audiences.

“There’s sort of a cliquish vibe that comes with any music scene, but, really, we should all be friends,” Calhoun says. “There are a lot of people in Lawrence who don’t recognize how awesome some of the music around here is. Bands like the Noise FM and Stik Figa are unbelievable.”

With a work ethic that’s more professional than that of many white-collar professionals, CIB appears to be well on its way to pushing the upwardly mobile pack.

“We don’t do this so we can get drunk as fuck and hang out at bars and hit on groupies,” Bruns says. “Obviously, music is a pretty improbable career choice, so our goal is to look back and say we put everything we could into it. If this fails, I’ll be damned if I look back and see where I fucked up.”

Not quite superhero material but still pretty damn super.