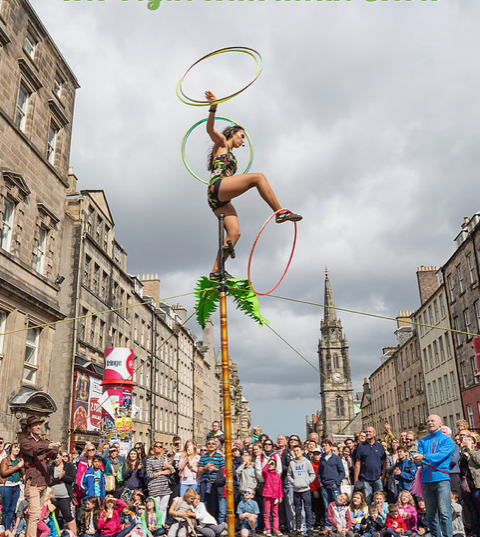 This weekend, in downtown Lawrence, you might see Martika breathing fire, swallowing a sword, and walking over shards of glass. One block over, witness the Flyin’ Hawaiian — an acrobatic, hula-hooping contortionist cracking jokes to a crowd. One thing you won’t see at this year’s Lawrence Busker Festival, now in its 12th year, though, is male performers. The 2019 festival will be the first all-female busker festival — not just in Lawrence, but the world.

“Women buskers have told me they often feel overlooked at festivals, and that they are in the minority,” festival producer Richard Renner says. “I believe we can highlight some amazing women and change that.”

Sara Kunz — the Flyin’ Haiwainn, pictured above — has been a freelance street performer for six years. She got her start when she saw her first street show while travelling in Europe. After the show, Kunz asked one of the buskers for some tips and eventually ended up performing with them. Then she started doing a solo act.

“I absolutely loved it,” Kunz says. “I have more artistic freedom, and I love getting to be literally on the same level as the audience.”

Over these last six years, Kunz says she has traveled the world and done more festivals than she can count. The Lawrence festival is only the Hawaiian’s second time flyin’ in the States, and the first time she will be able to share the stage with so many other female soloists.

“I am very often the only solo female performer,” Kunz says. “I love seeing a solo female show because there’s really not that many of us, and I feel really grateful that, like, kids will see me performing, and to them it will just be normal to see a woman performing.”

“Busking is a very male-dominated environment — specifically a white-male-dominated environment,” says Martika Daniels, an African-American woman who performs under the name Martika. “I’m 28 now, but for someone busking who is just 21 — when I originally got started — and a young woman, you really have to fight for a pitch [a spot to perform], and fight for your spot to be heard.” 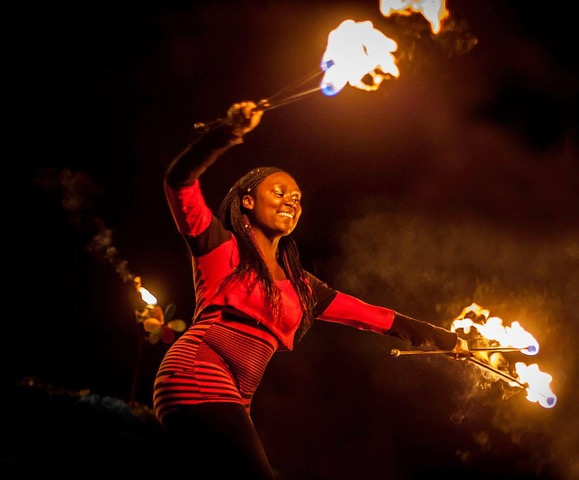 Years ago, Martika was working full-time in a laboratory — she has an associate’s degree as a veterinary technician — when she took some circus classes and started performing as a sideshow stuntwoman. She had no plans to make her hobby a career. Then the laboratory closed down. Instead of looking for another office job, Martika decided to take a shot at becoming a full-time performing artist.

Now, Martika is the only one-woman stunt show in Kansas City, and the only dangerous show of her kind in the Midwest. She says because of her risky act — her hula hoops are made from barbed wire, as one example — she has to work even harder to be taken seriously as a female soloist.

“There’s a lot of aspects of busking that are against women,” says Martika. “Specifically, with my show, people don’t like to see women get hurt or put in danger. And then there’s also the risk of working solo as a woman. Generally, we’re going to be alone, so we’re more susceptible to people trying to basically steal our pitch, or our hat where we collect money.”

Martika has travelled the country to present her daring show since 2011 and busked in Lawrence’s festival several times over the years. She hopes the all-female festival inspires young women.

“There’s only a handful of black women that perform swallowing swords in the whole world,” says Martika. “It’s so rare when people see that combination of the one-woman show and a black woman is doing it. When young women, and women of color, see that, doors open for them that they may not have even realized were possible.”

The Lawrence Busker Festival is May 24-26. Please visit http://lawrencebuskerfest.com/ for the complete schedule and list of performers. Other local, national, and international musicians, magicians, jugglers, contortionists, comedians, and fire performers such as strong woman Mama Lou; the juggling, unicycling, comedian Bekah Smith; and Molly Keczan (“the Farmer’s Daughter”), to name a few, will also perform.