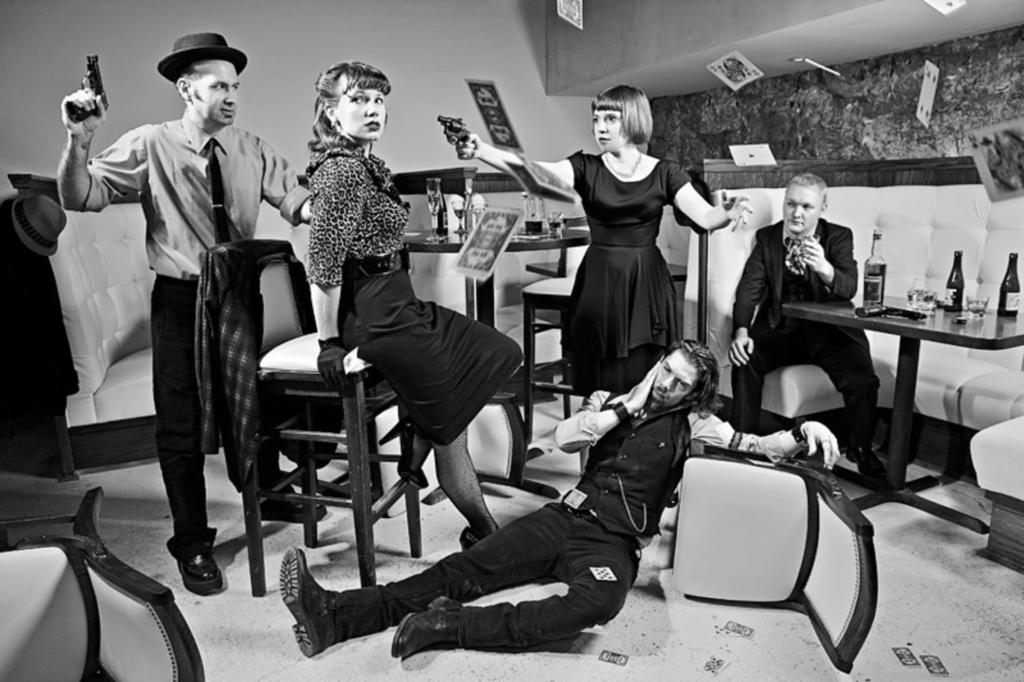 If a band can be defined by its drink of choice, the Latenight Callers would be a 12-year scotch.

“The aesthetic of what we do is timeless,” baritone guitarist Krysztof Nemeth says. “We’re like the house band at David Lynch’s pool party.” Technically, the Latenight Callers occupy the electro-noir genre: a sexy blend of synths, reverb-heavy guitars and dancing bass riffs behind lusty female vocals. The band’s live show is a vaudevillian take on the classic lounge act, sparkling at the edges with glittery, vintage rock and roll.

Originally formed as a DIY recording project in Nemeth’s basement in 2009, the Latenight Callers share a story filled with plot twists and surprises. Nemeth and vocalist Julie Berndsen, who are old friends, recorded together on a whim last year. The output of those early sessions ultimately made up most of the songs that the full band now plays onstage. “We were bored and didn’t have any friends,” Nemeth says. He’s joking: Friends urged the duo to press a few CDs in time for Christmas. When they decided to turn the project into a live act, they needed to flesh out the sound.

Enter the band, stage left. Berndsen was looking for a gig as a jazz singer. Guitarist Ellen O’Hayer joined the project. Bassist Gavin Mac also plays in the award-winning Motown cover band Atlantic Express. Nick Combs was brought in to play drums but opted to focus on keyboards in order to lend the band more mood. “We have a drummer — he plays keyboards,” Nemeth says, then laughs.

Combs met Nemeth when they bonded over their love of vintage scooters. (After Nemeth moved to Lawrence from Seattle, he was riding his vintage scooter and spied a similar model parked in front of a store. He went inside and introduced himself to the owner of that other scooter, who turned out to be Combs.) Mac, a friend of Combs’, was drafted to play bass, and O’Hayer came in on cello. At the band’s first practice, though, she decided that playing the guitar was more fun, so she put down her bow.

And so a band, conceived to flesh some music into a recording to be given away as a Christmas gift, has fashioned itself into a showcase of film-noir-referencing lounge motifs, anchored by the absence of a drummer. “The nature of the drums as an instrument is to be loud and overpowering, but we can control the impact of our drum machine,” Nemeth explains. “Julie’s vocals deserve to be heard in a prominent way, like she’s singing to the heavens.”

Latenight Callers’ shows are studies in Berndsen’s powerful voice, which sounds like a cross between Patsy Cline and Portishead’s Beth Gibbons. Donning fedoras and vests, the men of the band keep the rhythm, supporting Berndsen and O’Hayer as they croon at the front of the stage in tightfitting, brightly colored dresses. The band weaves a tapestry of vintage influences with veteran charisma, though it has been just eight months since the members started performing together.

On December 7, the band opened for the Pretty Things Peepshow at the Beaumont Club, and it also recently rocked the Press lounge at Crosstown Station with Thee Water MoccaSins, a local band that the Latenight Callers have developed a kinship with. “They’re unique and trying out new things, which is what we’re trying to do as well,” Combs says.

The affinity for the MoccaSins makes sense. Though that band produces mostly guitar-heavy ’60s-style rock, it also dabbles in atmospheric electronica. “Seeing the MoccaSins play in the alleyway during the Crossroads Music Fest was magical,” Nemeth says. “It’s all about mood, and they’ve got it.”

Magical moments in dark alleyways could be a mission statement for a band that’s best experienced through a filter of scotch and smoke. Nemeth punctuates the seductive sounds and pinstriped suits with his daily “Latenight Calls,” pulpy asides he offers on the band’s Facebook page. One such post: “‘How could I ever forget you,’ she spoke softly over the crackling, late night line. ‘I’ve still got your heart hanging from my bedpost …'” Others seem to hang in the air, heavy with regret: “He looked at his watch, noted the time, took a long drag from his last cigarette, and with an exhale of longing resignation, watched her walk away … “

“It’s like a little taste of evil you’re slipping into somebody’s pocket as you walk by them,” he says of the posts. “I’m a huge fan of noir fiction — lust, danger, murder, betrayal. It’s as American an art form as jazz.”

So the Latenight Callers are a little more murder-minded and sultry than the average T-shirt-and-jeans rock band, but they’re not grim. “We take what we do seriously, but we don’t take ourselves seriously,” Nemeth says. Compared with most bands, he adds, “What we do is just more swanky. And we smell better.”

The band is anchored in Lawrence, but the Latenight Callers have yet to take a stage there. A hometown debut is set for Liberty Hall in January. Lawrence had best be prepared — the band approaches live shows the way they prefer their liquor. “If it doesn’t sting a little bit going down, we don’t want it,” Nemeth says.