Latahra Smith says the system found Keith Carnes guilty of murder without proving the case. She may be right

Keith Carnes was approaching his 10th year in prison for a murder he insists he didn’t commit when a crusader took up his cause.

Latahra Smith, 47, a former medical assistant and self-styled legal assistant who makes a living as a caretaker and calls herself a missionary, was relatively new to the Kansas City area in the spring of 2014. She was shopping at the Raytown Wal-Mart when a stranger stopped her to comment on her T-shirt. It read: “Saved Women of Faith.”

The stranger asked Smith what she did. She told him she did a lot of things, including helping ex-offenders with matters such as eviction notices and child custody. “You should help my friend,” he said. And that is how Smith came to know about Carnes.

Carnes was a 33-year-old Kansas City resident decidedly on the wrong path in 2003, when he was arrested for the murder of Larry White. The 24-year-old was shot after he’d wandered into rival territory to sell crack cocaine. Witnesses described him being pursued by at least two persons and gunned down in a parking lot near 29th Street and Prospect Avenue. Prosecutors wasted little time in charging Carnes, a known drug dealer, with first-degree murder.

He was convicted by a jury, but a judge declared a mistrial and threw out the verdict. For his second trial, Carnes overruled his attorney’s advice and insisted on having the evidence heard by a judge without a jury present. Jackson County Judge Gene R. Martin found him guilty and sentenced him to life in prison without parole.

If Carnes’ friend had conducted a formal search for the right person to try to win the convicted man a second chance, he could not have done better than he did by stumbling upon Latahra Smith in that Wal-Mart.

Smith understands the despair of imprisonment. She served 10 and a half months on a federal conspiracy charge stemming from a 1999 incident in Oklahoma. “I knew about some bank fraud going on and I didn’t tell,” she says.

She also is deeply suspicious of criminal justice systems. When her son was charged with murder in Texas in 2008, she embarked on an investigative frenzy and helped get the charges dropped. After that, Smith was instrumental in getting his public defender disbarred.

“Had I not been the tenacious go-getter that God called me to be, my son would be sitting in prison right now,” she says.

Smith is deeply spiritual. She says she accepted a call to mission even before serving the bank-fraud conviction. She took the conversation in the Wal-Mart as a sign. For three months, she says, she fasted and prayed about Keith Carnes. And then a voice came to her: “He’s innocent. Look at the paperwork.”

Smith has been looking ever since. She has dug up every record in Carnes’ case, read transcripts of depositions and trial testimony, interviewed experts and sought out witnesses in Kansas City’s toughest neighborhoods. She has barged into the office of Carnes’ lawyer and taped an extensive interview with a retired detective who was involved in the case. She has even phoned Martin at home to ask him to reconsider.

“He was very nice,” Smith says of the judge. But he didn’t reconsider.

Smith believes that Carnes is serving a life sentence for a murder he didn’t commit.

The attorney who is handling Carnes’ appeal thinks she is right.

“She has completely shredded their case,” says Kent Gipson. 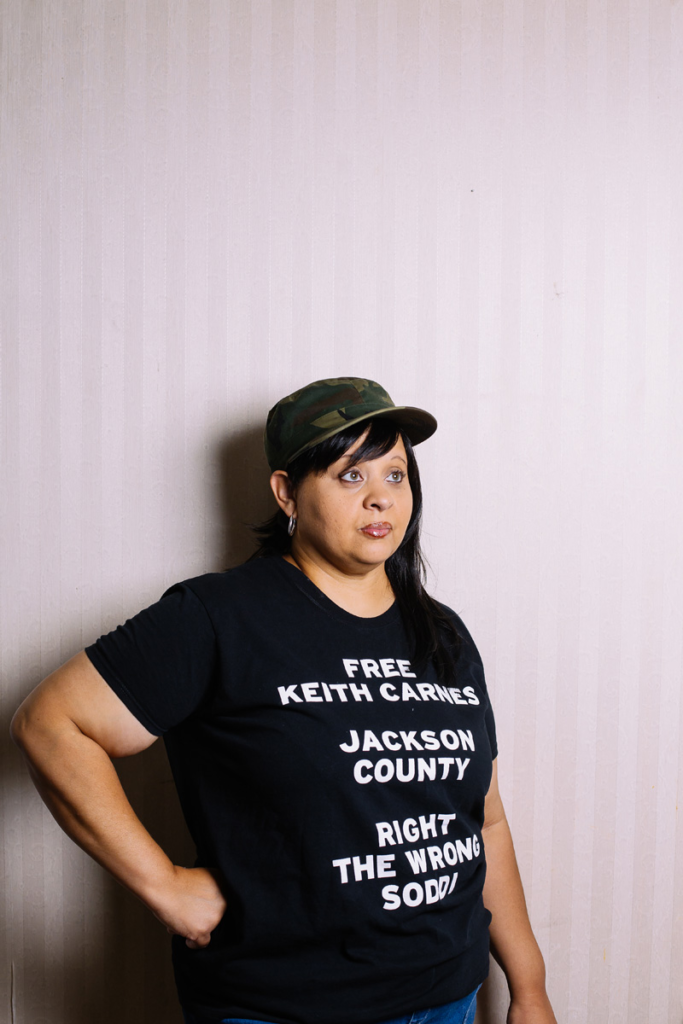 Gipson, a legend among the cluster of lawyers and advocates who specialize in post-trial appeals and innocence cases, remembers his first encounter with Smith.

“I was kind of skeptical of her at first, but I didn’t discourage her,” he says. “She’s done an amazing job on this case. She’s gotten people to talk to her that won’t talk to me.”

Smith’s most crucial step was to win the confidence of two women who served as the prosecution’s key witnesses at Carnes’ two trials. The women — both drug users and dealers — said they’d witnessed Carnes shoot White on the night of October 6, 2003.

In an interview with Kansas City police detectives soon after the shooting, and at Carnes’ two trials, Wendy Lockett said she saw Carnes and another person chase White from the corner of 29th Street and Olive into a parking lot at 2831 Prospect. White collapsed in the lot, she said, and Carnes stood over him and shot him in the head. She said she recognized him because of a patch he wore over his left eye.

Lorrianne Morrow also claimed to have seen Carnes, with one other man, chasing White. She alleged that Carnes rolled White over in the parking lot and shot him five or six additional times.

The two women’s statements to police and testimony at the trials, however, were riddled with inconsistencies, and both of them have since recanted. At Smith’s urging, Lockett signed an affidavit saying that, while she saw the shooting, she couldn’t identify the person who killed White. Morrow signed an affidavit naming a different person as the shooter.

Both women told Smith they felt pressured by the Jackson County assistant prosecutor who initially handled the case — pressured to name Carnes.

Smith has located three witnesses who contend that Carnes was inside a nearby apartment building when White was shot. At least two other witnesses claim to have seen the shooting and have said Carnes wasn’t responsible. Of those five persons, only one testified on Carnes’ behalf at trial.

The prosecution’s scenario is not backed up by physical evidence. Dr. Thomas Gill, then an assistant Jackson County medical examiner, testified in court that no medical evidence indicated that White had been shot by someone standing directly above him, as both Lockett and Morrow testified. The fatal shot to White’s head came from a greater distance, Young said. Another forensic-science consultant, who reviewed reports from the case at the request of Carnes’ attorney, came to the same conclusion but wasn’t called to testify at either trial.

No shell casings were found in the parking lot where White collapsed, and nothing connects Carnes to the firearm used to kill White.

Still, to accept Smith’s version of events one has to be convinced that the prosecution of Keith Carnes was corrupt.

According to Smith’s scenario: Kansas City police zeroed in on Carnes and ignored several other likely suspects who were in the area, including the owner of the murder weapon; former Jackson County assistant prosecutor Amy McGowan, who assembled the case against Carnes, bullied Morrow and Lockett into identifying him as the shooter; and a Kansas City police detective lied in court when he alleged that a witness for the defense had never given police a statement that might have provided Carnes with an alibi. The witness insisted she’d given a statement.

A glitch in this version of events is that, prior to speaking with McGowan, Morrow and Lockett had told police detectives that Carnes was the shooter. Efforts to contact McGowan, now an assistant prosecutor in Douglas County, Kansas, were unsuccessful.

Smith is also unsparing of Willis Toney, Carnes’ defense attorney. Her research has revealed that Toney had previously represented a different drug dealer, whom three witnesses placed in the vicinity of the murder scene, and whom one of the eyewitnesses now says was the shooter. Smith also faults Toney for not showing enough diligence in tracking down and deposing witnesses, and for his failure to call the second forensic science expert to the stand.

He adds that he succeeded in getting the first guilty verdict set aside. And court records show that he strongly advised Carnes not to waive his right to a jury in the second trial.

Toney says he didn’t call the forensic expert because he didn’t think his testimony would support Carnes’ defense. And it’s not unusual in his line of work, he says, for a lawyer to represent an associate of a former client.

The state’s case hinged on the eyewitness testimony, Toney says, and he insists that he did his best to prove the witnesses to be unreliable. But it seems to surprise him that both women have recanted.

“I represented Mr. Carnes to the best of my ability,” he says. “If a witness lied under oath, twice, and now wants to come back and recant and admit to perjury, that is nothing I could have predicted.”

In essence, Smith has replaced the narrative used to convict Carnes with a different story that places him at the scene, but has someone else chasing down and executing Larry White.

“There’s no way he would be convicted with the evidence she’s come up with,” Gipson says. 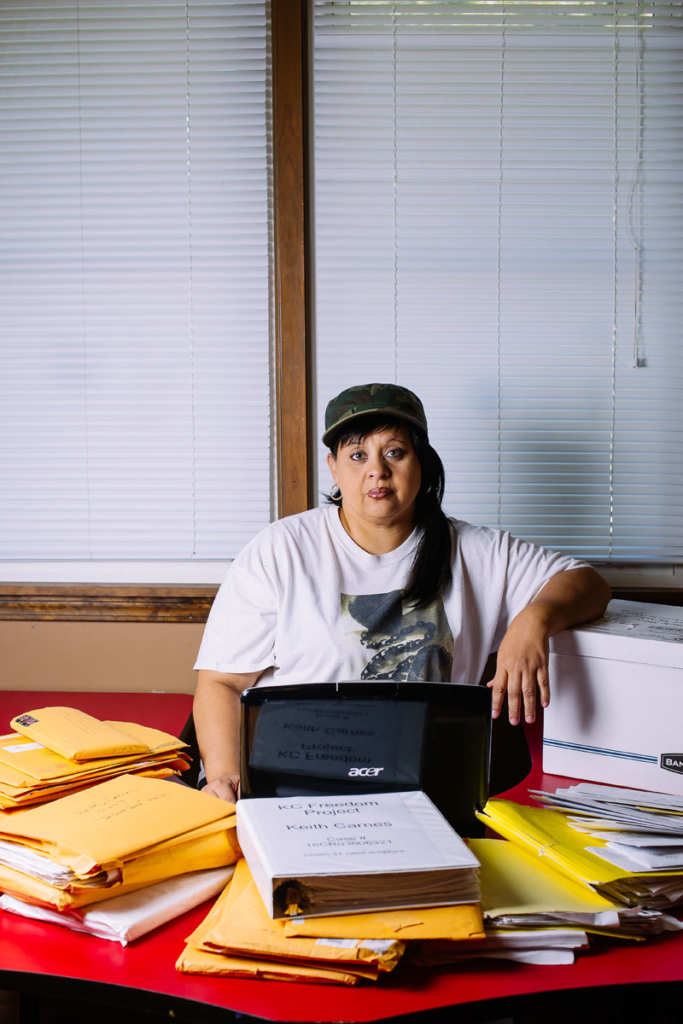 But Carnes was convicted with the evidence at hand at the time. And, to this point, nothing in the normal channels of appeal has served to upend Martin’s verdict. A prosecutor could legitimately argue that the integrity of the legal process should be upheld.

And yet the legal process has repeatedly been exposed as flawed, with innocent people languishing behind bars for years. It’s becoming more common for citizens — with or without law licenses — to give convictions a hard look. One example: MTV is airing a docuseries called Unlocking the Truth. It’s hosted by Ryan Ferguson, a Columbia, Missouri, man who was wrongly convicted and imprisoned for 10 years, and the show examines three controversial cases.

Gipson is trying to get a court to take another look at Carnes’ case. He has made Jackson County prosecutors aware of Smith’s findings, and asked them not to oppose a motion seeking a new trial on Carnes’ behalf.

“There’s got to be a reasonable way to address this,” he says. “I want to get him out of prison. I don’t think he’s guilty.”

The prosecutor’s office is so far unpersuaded.

“We have not made a decision [on Gipson’s request], and if we have to we would probably take the opposite position,” says Michael Mansur, a spokesman for Prosecutor Jean Peters Baker.

Meanwhile, Smith keeps busy. Operating under the auspices of a nonprofit that she founded, the KC Freedom Project, she speaks at forums around Kansas City. She hosts a talk show, Jaws of Justice, on KKFI 90.1, the community radio station. She visits Carnes often at the Crossroads Correctional Center. And she has managed to erect a bulletin board alongside Wornall Road, proclaiming his innocence.

On September 9, Smith’s nephew, Terrel Smith, was found slain in Tulsa, Oklahoma. Police there last Thursday announced the arrests of four men in connection with the homicide. For most people, this news would bring relief. For Smith, it brought a new cause.

“According to information I have received each of these men submitted statements of confession to murdering or taking part in murdering my nephew,” she reported last week in a Facebook post. “It has been my experience that confessions can sometimes be coerced … You can trust and believe I will be looking into the detectives’ investigative files and requesting the medical examiner’s report, etc. I will make sure the wrong person is not convicted for my nephew’s murder.”