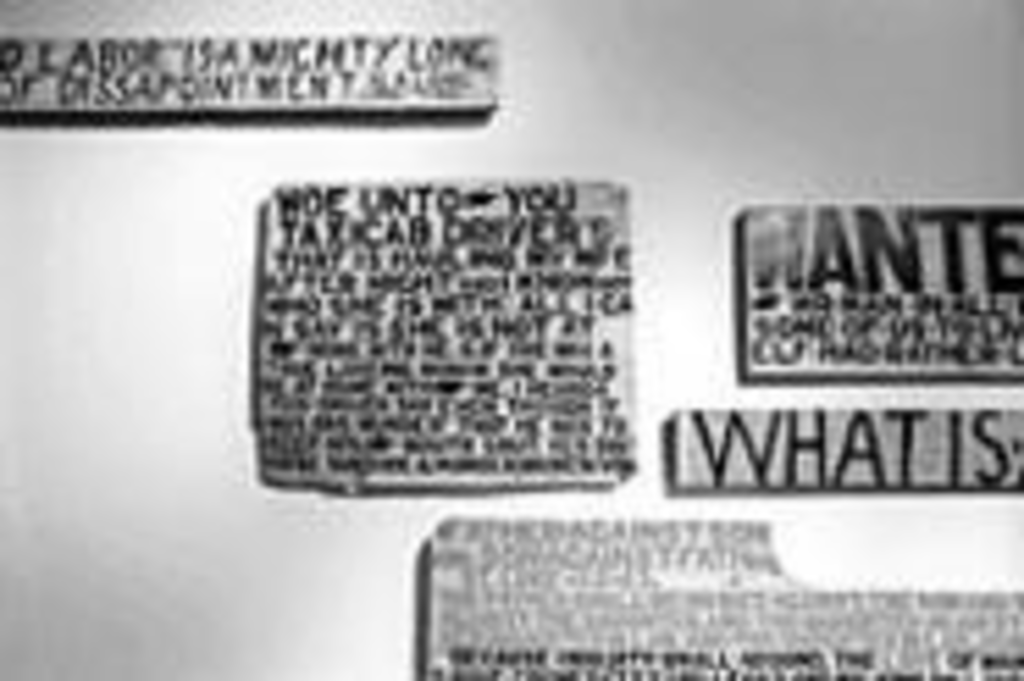 I dream I am dancing through words. The floor is scrawled with them, floating like smoke, and a naval officer in dress whites waltzes me through each one. The last word, the largest and most elegant, is “abstraction,” written in a lovely black cursive. I know that if the officer and I dance through “abstraction” just right, we can enter the brightly lit room where a party is going on. It is a pleasant, comforting dream. And except perhaps for the naval officer (whose role I’ll leave to the psychoanalysts), it’s less preposterous than it seems.

Words are the voices in our heads, the emotions spilling from our mouths or hands, the ideas smoldering in our brains. We create ourselves from words: “I am garrulous, literate, compassionate.” And from words we create our world: “It is brutal, pandemonious, beautiful.” Our voices call out in hopes that more than our echoes will return to prove we are not alone.

In the H&R Block Artspace exhibition Signs of the Times, words — specifically, written — are for one artist, Jesse Howard, the only reliable connection available after a lifetime of failing to connect in other ways. For another artist, Jenny Holzer, connecting is about the connection itself — that is, the idea of words. For still another, Jack Pierson, words imply all that we may never truly connect with, the idiosyncratic feelings or thoughts of another human that remain visible to us but forever out of reach. Each artist’s words form a distinctive aggregate, a personal sign, if you will, that says to whoever will listen, “I am a human being. I exist. Therefore, I have something to say.”

Howard was born near Shamrock, Missouri, in 1885 and died in Fulton, Missouri, in 1983. In between, he roamed the States and lived many lives, working as a streetcar operator, sawmill worker, railroad laborer, farmhand and tenant farmer, sawing wood, shearing sheep, shoeing horses and plowing fields. In 1916 he married Maude, who bore them five children. Jesse Howard read the Bible and the newspaper and thought JFK was a coddled rich boy and that communists were the “MASTER MINDS OF DECEIT.” He owned a white cat. He felt persecuted by his fellow townspeople. He was a poor speller. I know these things because he told me — me and the countless other travelers and folk-art devotees who have viewed his handpainted signs for nearly half a century. Before the pundits declaimed Howard an artist, he was simply (in the truest sense of the word) an aging man who had things to say, even if he did not have precise spelling or grammar to say it right:

“WOE UNTO YOU TAXICAB DRIVER’S THAT IS HAULING MY WIFE AFTER NIGHT AND I KNOW NOT WHO SHE IS WITH. ALL I CAN SAY IS SHE IS NOT AT HOME WITH ME …”

“… I THIK THE ICEGERBS HAVE GROWED FEET AND LEGGS AND WALKING ON LAND. THEY SHRINK A LITTLE IN DAY TIWE AND GAIN IN THE NIGHT. SOME FOLKS SAY I IM CRAZY. MAYBE I IM. JUST TURN ON A LITTLE MORE HEAT LORD AND MELT THE ICE AWAY …”

Keep in mind that Howard’s work was not created for a gallery space. He painted his sentiments and diatribes on makeshift signs constructed of scavenged lumber, which he posted on his property for the passing world to read. Like most folk artists, he developed a personal aesthetic, a medium that seemed to suit his message. He used block letters, painted primarily in black enamel with scatterings of red, blue, green or brown. Early on, he separated words with equal signs, then single or double quotes, and used the graphic image of a pointing hand less, it seems, as a way of giving import to a particular word or phrase and more as a design element. If it is true that Howard traveled the country by train, freeloading on boxcars, as gallery director Raechell Smith speculates, then it is plausible that his aesthetics were inspired by the simple, handpainted signs once ubiquitous along rural highways and rails. It also stands to reason that after settling down, Howard saw himself as one of those spots along the way, able to connect with and influence passersby as he himself had been influenced, particularly by biblical quotations.

Reading Howard’s 53 signs on display is akin to reading a novel with missing pages. So much and so little of the man is revealed in what he chose to communicate to a world he apparently felt had betrayed him: religion, politics, community rancor, personal grief. The viewer is left to fill in the lapses of language within the signs and the lapses in time between one sign and the next. Howard’s unenlightened attempt to breach the gulf between himself and humanity was sometimes successful and sometimes alienating. Yet the exhibition proves that the human need to express oneself and one’s time spans all strata of education and training.

Jenny Holzer’s stratum is the opposite of Howard’s: educated and refined, with a consciousness of her place in art history and contemporary culture. For more than two decades she also has used words as her medium — in posters, LED displays, marquees and various other signs intended, like Howard’s, for the transient public. But Holzer’s signs are less about Holzer than about who we are as a society. And who we are is our words: a litany of useful and useless verbiage from hundreds of often anonymous, sometimes unreliable sources.

“EXERCISE BREAKS AT STRATEGIC POINTS DURING THE DAY ENHANCE PRODUCTIVITY AND PROVIDE SIMULTANOUS SENSATIONS OF RELIEF AND REJUVENATION.”

“IT CAN BE HELPFUL TO THINK OF THEM EATING THEIR FAVORITE FOODS AND OCCASIONALLY THROWING UP AND GETTING BITS STUCK IN THEIR NOSES.”

Because the 75 signs in Holzer’s “Living Series” are aesthetically so generic, in simple black or red text on white rectangular plaques, the viewer is forced to derive meaning from the words alone. No easy task. Every factoid, opinion and bon mot is influenced by those that surround it as the viewer attempts to build a narrative from seemingly unrelated information. Depending on the order in which you read the work, meanings change. And yet there is a subtext to the aggregate that is menacing, subtly feeding our worst fears and exacerbating the paranoia and neuroses the media inspire in us every day: “TUNELING IS GOOD FOR TRANSPORTATION, CLANDESTINE MOVEMENT, AND THE DUAL PROSPECT OF SAFETY AND SUFFOCATION.”

Although her texts read like sentences out of context, clipped from magazine articles or advertisements, or appropriated from overheard conversations, Holzer’s work is still personal, a record of her particular physical, intellectual and emotional place in the world. After all, she chose these words as the lifeline between herself and her viewers.

Even more personal are Jack Pierson’s vibrant color photographs of three-dimensional words: BLOOD, EROS, ME, STAY, SORROW and UGLY and a gold wall sculpture of the word ANGST, made of separate fractured letters. Viewed individually, Pierson’s works may be seen as merely pleasing, even slight. But as with Howard’s and Holzer’s works, there is a story behind them, and that knowledge adds a poignancy that otherwise is absent. Pierson’s lover died of AIDS. Thus, the words become the elements of a tragedy, and the white wall between them the abysmal silence after a loved one is gone. Except for ANGST, which is huge and unavoidable and indeed angst-inducing, each word floats in two-dimensional space as if behind a pane of glass that the viewer can never pass through. We can see Pierson’s SORROW, but we can never touch it; it is uniquely his. Finally, the stark solitariness of each image, bereft of any context but its own, resonates with the voice of a child who does not give a damn about all the fancy adult words for pain. Blood is blood. Ugly is ugly. Death is death.

In the beginning was the word. And also in the end.

Beyond the visual and textual reality of each artist’s work is an abstract level — and that’s where the ultimate communication between artist and viewer/reader resides. After witnessing and interpreting the art, we change over time — and so do our original interpretations. And each subsequent interpretation again changes us. It is this interplay, this process of perpetual mutation, that is the last word, the last step, the last turn in the waltz of understanding language as far more than signs and signifiers.