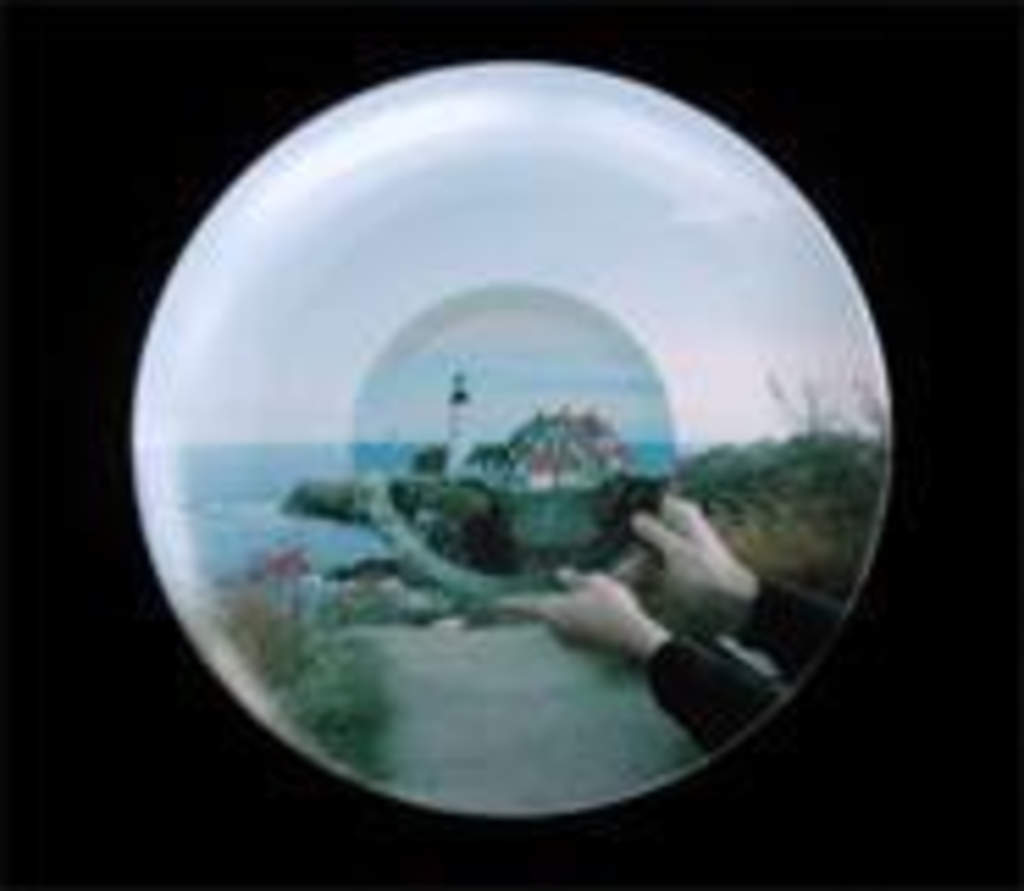 The H&R Block Artspace’s Humor Me aims to explore humor as it’s expressed in the contemporary art world. Gallery curator Raechelle Smith has assembled an impressive array of work by national and international artists, and the show earns its share of laughs — but there are also uncomfortable moments when the jokes bomb.

One of the more entertaining pieces is Joe Sola’s digital video “The Studio Visit,” a sort of artist’s version of Punk’d. Sola’s scenes start innocently, showing his slightly mundane presentations to curators (one is Smith). But after a few seconds, Sola suddenly runs and leaps headfirst through a glass window. He does the same thing in every segment, with minor alterations so that the trick remains surprising even as it grows familiar. After the first or second installment, the joy for the viewer is being in on the fearless prank.

Equally intriguing is “Light and Easy,” in which Yang Zhenzhong performs the heroic, physically impossible act of balancing a Shanghai cityscape on his middle finger. Aside from the thrill of watching an artist give a big F-U to a repressive regime, it’s appealing because it portrays him as a kind of magician. In this newly manipulated reality, the artist is all-powerful.

Reality is similarly altered in “Simu-Lighthouse Series.” There, Adriane Herman reproduces the same lighthouse in digital landscape photographs adorning six dinner plates. The lighthouse is seen from the same perspective throughout different seasons and in one night scene. The progression moves from left to right, with the last image showing the plate in its final resting place … on a plate rack. Herman then puts the plate-rack image on a plate that hangs on the gallery wall. Watching the process unfold and the photographed scenes continually overlap — and the fact that it’s a benign domestic object — makes the work funny. Like Zhenzhong’s piece, “Simu-Lighthouse Series” plays with the viewer’s perceptions.

Brazil-born Vik Muniz’s two photographs are playful, too, especially “Pictures of Clouds: Manhattan,” for which Muniz commissioned a sky writer to “carve” the outline of a cloud just above the Manhattan skyline — art mischievously imitating nature.

“Bliz-aard Sale” is David Hammons’ photographic documentation of his performance as a homeless man. At first, it seems dull, but it turns out that he’s selling neatly arranged, different-sized snowballs on a snowy day. The picture is worth seeing if only for the look on the face of the sidewalk shopper.

Peter Finnemore’s 10 films range from humorous to charming to nearly pointless. In “Guerrilla Exercises,” the artist (the silent star of most of his films, and he’s always dressed in Army fatigues) uses a chest-and-arm exercise device attached to a tree limb, only to lose it as it flies, slingshot-style, into the woods. The cute feline featured in “Schrodinger’s Cat” is first surprised and then bored by a fallen, squealing mechanical cat nearby, and “The Potato Eaters” shows a happy but hungry mob of Finnemore look-alikes banging their utensils on the dinner table and dancing to a surf-rock soundtrack. It’s similar to one of his other films, “The Greenhouse Effect,” but only because neither produces the amusement that’s evidently felt by the actors on the screen.

Another video performance is, however, indelible: the odd and alien “Member (a.k.a. A Schlong Journey)” by William Pope.L. In the introduction. Pope.L intones, “A thing is never just a thing when meaning becomes undecidable; everything becomes alive; even the air changes color.” It feels like a good setup for what follows: a video camera primitively capturing Pope.L as he walks through the streets of Harlem with an exaggerated PVC pipe for a penis (it even has its own cart on wheels), a rubber glove attached to his head and a backpack tied to his chest. Slowly navigating the sidewalks, he appears physically and mentally lost, and in places the film slows to a crawl. There’s plenty of pleasure in watching bystanders’ reactions to this strange man.

Tamy Ben-Tor’s three video Portraits seek to engage the viewer with quirky monologues. In “Alejandra,” Ben-Tor speaks to a friend on her cell phone, obsessing about “feeling good”; in “The Contractor,” she talks earnestly at the viewer about money. The funniest is “Artist in Residence,” in which Ben-Tor, in bowl haircut and bright-yellow raincoat, speaks in a detached and strange voice about installing a piece of art in the rain. The show may ask that we humor her, but her characters are so self-involved that they’re boring. A little too realistic, perhaps?

Iranian-born Ghazel’s three simultaneously playing films are curious and memorable for their sparse, sometimes bleak qualities. Their most provocative moments show the artist in extreme conditions: trapped behind bars smoking her “Last Cigarette” or, more absurdly, covering herself in a bag of flour or wrapping herself in tin foil. In all of the scenarios, she remains speechless (though subtitles occasionally appear on the screen), her identity hidden behind her ever-present chador. Alone and seemingly constrained by her surroundings, she achieves freedom and release only by walking out of the camera frame — only to enter another scene where she’s trapped again. The films are personal and deeply felt, and the scenes aren’t ever resolved; the effect is disquieting.

Call me a grump, but that’s not funny.